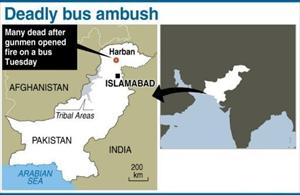 18 Shia Muslims including 3 women 3 children were killed and eight others were injured on Tuesday when Wahabi terrorists of Sipah-e-Sahaba and Lashkar-e-Jhangvi stopped passengers and ordered them to get off the bus on Karakoram Highway in the district of Kohistan.

The bus No. 8371 owned by Mashaburum private bus service was carrying at least 39 passengers on board from Gilgit to Rawalpindi.

Eight armed terrorists of banned outfit Sipah-e-Sahaba and Lashkar-e-Jhangvi stopped two buses and a coaster. The terrorists were reported to be in Army uniform. They asked the passengers to get off the bus and shot them after checking their CNICs.

“All the people on board were Shia Muslims, and at the moment it looks like they were targeted by armed men from the local Sunni community,” a senior police official told Reuters.

A spokesman belongs to Jandullah faction of the Pakistani Taliban, a Sunni militant group, claimed responsibility for the killings.

The bodies of the killed have been kept at Shatial hospital.

Abdul Sattar, a local lawmaker (MP), said eight gunmen were involved in the ambush, and all were wearing military uniforms, presumably to make it easier to stop the bus.

Kohistan borders the Swat valley, where Pakistan in 2009 managed to put down a two-year Taliban insurgency.

Human rights groups have heavily criticized the Pakistani government for failing to crackdown on sectarian violence between the country’s majority Sunni and minority Shiite Muslim communities that has killed thousands.