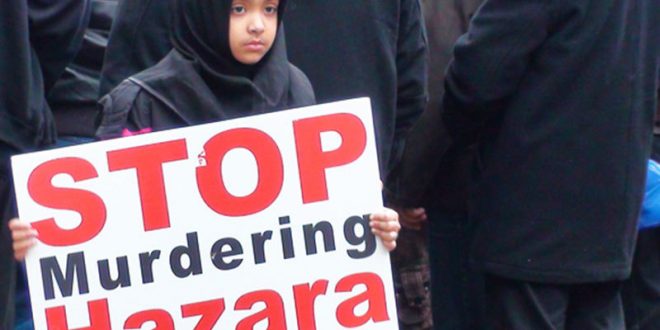 In advocacy effort for Hazara minority, the following statement was presented by SRW at the 33rd Session of the Human Rights Council in Geneva

The protection of ethnic minorities is a priority for Shia Rights Watch. The Afghan Hazara minorities who are frequently persecuted as a result of anti-Shia extremism are of high concern.  A recent Kabul bombing during a peaceful protest that resulted in the death of 80 innocent lives lost and wounded 260 is a key example of such discrimination and the lack of attention the international community gives to this minority group.  This incident reversed the progress made by current Hazara reformists, mostly targeting young leaders who hoped to lead future generations.

Hazara have face very harsh and inhumane treatment throughout the history. An estimated 60% of thier population was exterminated during the 1890’s genocide of Hazaras in Afghanistan. During and after the genocide, Hazaras lands were confiscated and distributed , and tens of thousands of Hazaras men, women, and children were sold as slave. It was also reported that tens of thousands of Hazara captives were sold during the same time to pay the expenses incurred in supporting revolt.  As the result of past degradation , this population is still considered as second class citizen with no protection.

Once the largest ethnic group in the country, only make up 9 percent of the Afghan population today. The increasing ethnic tensions in the country, under extremists and terrorist organizations such as the Taliban and ISIS have added great fear to  Hazara. Currently this underrepresented population face great threat of ethnic and heritage cleansing that must be prevented.

Shia Rights Watch has noted the Constitution of Afghanistan has several clauses which provide protection to minorities, including the Shia Hazara. SRW would like to reiterate that according to article twenty-two,  “any kind of discrimination and distinction between citizens of Afghanistan shall be forbidden. The citizens of Afghanistan, man and woman, have equal rights and duties before the law. Governments are responsible for protection and safety for all, but Hazara dense areas are not protected enough resulting in genocide. Also, Afghan government needs to preserve rich heritage and culture of Hazara by promoting them, and giving them freedom to share and express their belief. Hazara should be recognized under law and their children should have the right to study their own educational materials at their schools.

Hazara are among Afghanistan’s well educated people who have positive impact on the peaceful future of this country.  “The Hazaras are producing the most enthusiastic, educated, forward-looking youth” according to Michael Semple,  the deputy to the special representative of the European Union in Afghanistan.

Besides claims of genocide, there are claims of forced expulsions of ethnic Hazaras and Tajiks from areas controlled or conquered by the Taliban, as well as harassment of these minorities throughout Taliban-controlled areas. Noteable number of Afghan refugees belong to Hazara community who are leaving ancestral homeland to find peace.

Such group are deprived from their rights to dignity, life, security, education, and many more based on International Bill of Human Rights.

Shia Rights Watch believes Hazara are actively and positively contributing to the well being of the Afghan diverse  community and their rights should be recognized and respected. To ensure such, SRW  urges the Afghan government to abide by its constitution in protecting the rights of minorities and encourage its citizens to appreciate its rich diversity.