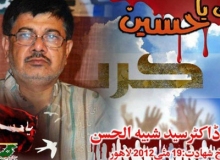 The terrorists riding motorcycles targeted Mr. Rizvi who was standing outside his college. He was seriously injured due to firing on Friday night. He was rushed to services hospital for treatment where he succumbed to his injuries in the wee hours of Saturday.

Police has sent Dr Shabih’s body for post mortem and registered case on request of his brother Sharif ul Hassan.

His murder has evoked condemnation from many eminent figures and parties. Shia scholars and parties also condemned the killing. They said that target killings of Shia Muslim continued in all over Pakistan. They demanded of the government to play an effective role to stop the genocide of Shia Muslims.