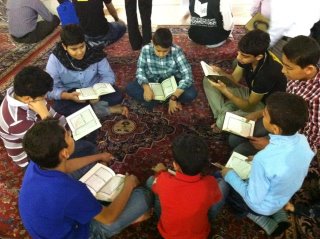 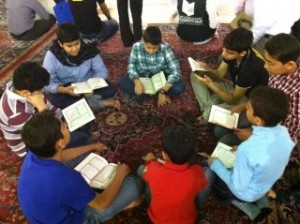 Shia Rights Watch strongly condemns the arrest of the youngest Bahraini Quran reciter, Hassan Abulhassan, 11, by the Saudi religious militia and police at the Prophet Mohammad Mosque in Medina.

The militia arrested Abulhassan while he was giving a lesson to other children on the correct way to recite Quran. The militia attacked the man who was chaperoning the children and filming them at one of the courtyard of the mosque.  The Saudi militia then took Abulhassan and his father to their headquarters for interrogation.

When the father of the Abulhassan inquired about the reason for detention, he was answered that they got the information that Hassan is a Rafidhi, a derogatory term for Shia Muslims widely used by Wahhabi extremists.

The police told the father Abdulah Abulhassan that he should not recite the Quran in the places like Prophet Mohammad Mosque. The incident shocked the witnesses who expressed their outrage to the Saudi religious militia. One of the Egyptian witnesses followed them and refused to leave until they were released.

He testified that Hassan did not make any mistake that would justify  the militia’s attacking and intimidating him during the recitation of the Quran.  Abulhassan and his father were released by Saudi religious militia without apology. Shia visitors for the Prophet Mohamed Mosque are a frequent target for abuse of the Saudi religious militia and security forces.

In December of 2011 a Shia Muslim from Australia was arrested in Medina and sentenced to 500 lashes ad months in prison after been arrested by the religious militia.

Saudi Arabia is one of the most anti-Shia governments in the world. 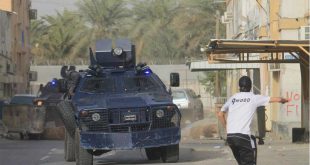