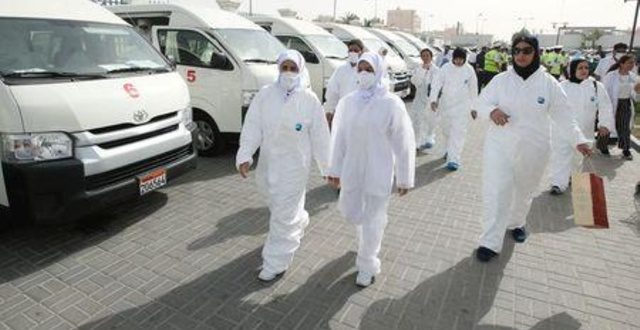 Tension over COVID-19 or the Coronavirus disease looms internationally as nations combat the expansion of the disease. Amidst the chaos, reports of discrimination are also prevalent. Ethnicities native to countries with the highest prevalence of the disease report being the target of violence as well as racial slurs.

In the Gulf region, discrimination against Shia Muslims is a primary concern. Already a marginalized group, Shia in Bahrain and Saudi Arabia fear being scapegoated for the decline in national health and the expansion of the disease in the country.

While they make up a majority, the Shia of Bahrain live with limited rights. Their religious identity is undermined, and expression is criminalized. They are regarded as second-class citizens in their home nations.

Today, sentiments of anti-Shiism are endangering the lives of all Bahrainis regardless of their religious identity.

Shia Rights Watch raises concerns for bias within anti-coronavirus efforts, which may lead to insufficient countering of the disease. The prejudice which places blame for the propagation of the illness on Shia Muslims is unsupported by medical authorities.

Moreover, sentiments of anti-Shiism degrade national morale and undermine a unified national effort against the disease.

Many within the nation continuously ridicule Shia and calling them traitors to their Bahraini nationality, regardless of their health status.

Today, Bahrain is home to 156 confirmed cases of the coronavirus.

In late February, Dr. Manaf al-Qahtani, an infectious disease consultant and member of the team for countering the disease, rejected accusations that placed Shia Muslims as central transmitters in the spread of Coronavirus to Bahrain.

“Neither the virus nor the disease has any relation to a specific race or a particular sect. It is a widespread virus that anyone may catch. We wish no one would nickname the virus by linking it to a specific party or doctrine. The World Health Organization made sure not to name it “China or Wuhan” virus, referring to the city of Wuhan from which the deadly virus originated.”

Within his statement, al-Qahtani pointed to the anti-Shia sentiment that fuels Bahrain’s lacking system for addressing the spread of the disease.

Thus far, Bahrain has instituted remote medical vans that test residents, especially those who traveled abroad and had returned previous to the travel bans, which now limits entry into the country.

While the travel ban serves to limit the spread of the contagion to the island-nation, it also complicates international efforts.

Currently, there are approximately 2100 Bahraini citizens stranded in Iran. The travelers were tourists across the country and visitors of religious shrines in the city of Mashhad. These individuals remain in Iran as all flights out of Iran are canceled. Some note the inability to pay for hotels and even lacking “clean clothes” after unexpected prolonging of their trip via canceled flights. Reports exist which place families with elderly and children in the Mashhad airport for days.

Despite calls for extradition, much like that of Canadian and American citizens from Wuhan, China, the Bahraini government has failed to make any efforts to address the needs of its citizens abroad.

Grievances highlighting a complete lack of regard for Shia Bahraini nationals exist. Not only has Bahrain failed to activate flights for those stranded, but Bahraini authorities have also disregarded foreign interventions and refused to cooperate.

The Bahraini Shia are not the only travelers from the Gulf regions in Iran. Both Saudi Arabia and Kuwait have nationals in Iran. Counter to Bahrain, however, both of these countries extradited their nationals and set up hotels with complete medical resources to reduce possible transmission. Kuwait even expensed hotels in Iran to house travelers that remain in Iran. Yet, Bahraini authorities refuse to make any efforts to protect its citizens from the coronavirus.

On Tuesday, March 10, the Foreign Ministry of Iran announced that with the intervention of the nation of Oman, the first group of Bahraini citizens would be traveling home. Extradition came after efforts were made by Kuwaiti citizens to gather funds for those stranded. Shia Rights Watch notes that the delay in extradition increased the risk of exposure for travelers and counters efforts to reduce the spread of the disease.

Despite recent efforts to bring back Bahraini citizens from Iran, Shia Rights Watch expresses a concern as to how they will be treated within their own nation.

Travelers who returned to Bahrain previous to the closure of the countries borders report being humiliated at the Bahrain International Airport, where some remain to this day. They are reportedly held in designated areas that functionally failed to meet international disease prevention guidelines.

Shia Rights Watch calls on the reframing of the coronavirus epidemic in Bahrain such that prevention is highlighted. Moreover, the organization warns against the implications of naming any single group as propagators of the disease.

Combating the coronavirus is an international effort. All groups must work together to prevent the spread of the disease without the fear of degradation or marginalization.