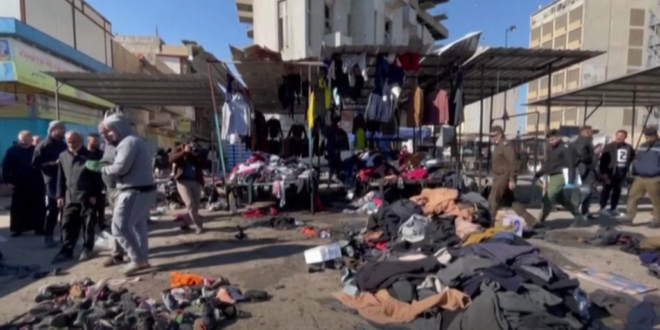 Shia Rights Watch condemns bombing in Baghdad, Iraq on January 21, 2021 and offers its condolences to the nation of Iraq.

In a twin suicide bombing in central Baghdad, 32 people have been killed and 110 others have reportedly been injured on Thursday morning.

Yahya Rasool of the Ministry of Defence said one of the perpetrators feigned illness to lure a crowd around himself in the marketplace of central Tayaran Square. As people gathered, he detonated his explosive. A second perpetrator detonated his device targeting those who gathered to help victims of the initial bomb.

Wreckage and dried blood remain on the streets as onlookers walk by.  Sources within Baghdad report a sense of turmoil as family members and loved ones wander the market-place in search  of bodies affected by the blasts.

The death toll is expected to increase given the gruesome nature of the attack.

The attack has been condemned as a “reprehensible act of cowardice that underscores the dangers of terrorism that millions of Iraqis continue to face” by the United States embassy in Iraq.

While no one has yet to take responsibility for the attack, analysts note the nature of the attack as a hallmark of Daesh.

Tahsin al-Khafaji, spokesman for the Joint Operations Command, said, “This is a terrorist act perpetrated by a sleeper cell of the Islamic State.” Al-Khafaji further stipulated that the attack aims to express the existence of ISIS in the country.

The last double bombing that occurred in Tayaran Square, Baghdad occurred in 2018 with 35 killed and 95 others injured. The 2018 attack occurred shortly after Prime Minister Abadi’s declaration of victory over Daesh.

While the frequency of Daesh attacks across Iraq has decreased since 2017, the extremist organization is still active, and the recent attack is a reminder of that.

Thursday’s attack is a clear display of the continued need for an anti-Daesh offensive in Iraq. Since 2018, ISIS is perceived to be ‘defeated’ as their visible ties have been broken.

Shia Rights Watch calls for a renewed examination of extremism in Iraq. Despite claims of weakened Daesh activity, the casualties in the bombings in Tayaran Square attest that sleeper cells are active danger to the security of the nation.

Holistic anti-extremism measures must be taken and efforts to reduce casualties within response teams must be adopted.