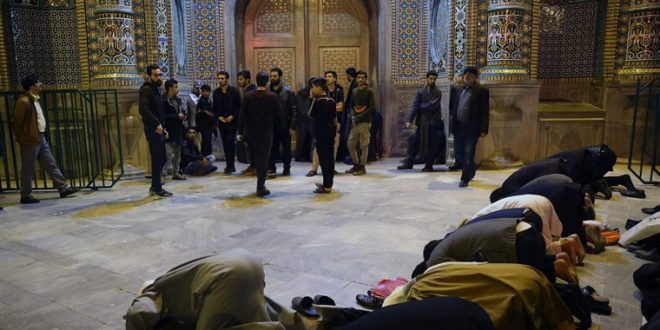 How Methods of Prevention Matter

Amidst developments of the Coronavirus or COVID-19, increased scrutability has been placed on measures taken at the national and local levels.

The most recent and troublesome prevention measures was that of the mismanaged closure of major Shia Shrines in Qum and Mashhad. A topic of great importance to the Shia communities, the sudden and unannounced closure of the Shrines, led to significant protests amidst Iran’s faithful. Critics note that officials did not even announce closure with justification or time of possible opening. They criticized the negligible communication between administration and Shrine-goers. Moreover, the closure of religious spaces and a lack of measures taken to close non-essential markets heightened sentiments.

Shia Rights Watch acknowledges the importance of disease prevention. It expresses support for those who strive to carry out the World Health Organization’s suggestions to limit exposure and death from COVID-19 daily. The organization further notes that the closure of Shrines in Iran, which has thus far thrived on faith, was naive and counterproductive.

The sudden closure has led to the spiral downturn of the relationship between the government and the people. Of the people gathering outside the Shrine, numerous protestors and vocals were met with violence. Men, women, and children were attacked by security forces as they used force to disperse crowds and thwart unrest. Following the attacks, authorities announced protestors were political dissidents and critics they have longed aimed to marginalize. The ill-treatment of protesters has proved to be counterproductive as it has led to a further outcry against policy-makers.

In addition to being mismanaged, Iran’s abrupt closure of religious sites was unreflective of the unique position of these institutions within religious and non-religious sects of society.

The management of Shrines in other countries, such that of Iraq, stands counter to Iran. Iraq is home to numerous major religious Shrines, including but not limited to Ali, the first Shia Imams, Hussain, the grandson of Prophet Mohammad, and his brother Abbas, the al-Askari and Al-Kadhimiya. The Shrines are one of the most influential voices to educate and treat people in addition to medical centers. Shrine management early on made definite conviction that the Shrines are valued refuge-sites and would under no condition be entirely closed. Instead, across social media and news outlets, management communicated active sanitization measurements within 24-hour durations in which a subsect of the Shrine is closed. A clear plan that acknowledged the social perceptions of the Shrines while also addressing disease prevention was announced and carried out.

While it is understood that progress is continual and that the measures in Iraq are far from conclusive, the management of Iraqi shrines is a clear counter to that of Shrines in Mashhad and Qum.

The Position of Shrines in Society

Shrines exist across religious and cultural spectrums. While each Shrine is associated with unique ideological significance, all Shrines serve as central spaces that address socio-psychological needs.

Shrines stand independent of mosques. While mosques are seen as spaces to practice a single method of worship, Shrines allow for individual expression of emotion and spirituality. Mosques are primarily attended by Muslims, while Shrines are visited by Muslims and members of other faiths.

Shrines are a catalyst for integration and harmony. They are spaces in which age, race, ethnicity, and socio-political positions fade. They are stable, trusted, and transcendent public spaces for people of all backgrounds.

Shrines serve as symbols of tranquility and peace of mind. In times of tension, these locations serve as locations of meditation and reflection from those who seek to ‘escape’ daily pressures.

Shrines have served vital social and cultural roles, and the recent closures failed to empower prevention measures using these roles. The sudden closures overlooked the potential of these settings to progress prevention measures and the possible negative social implications, including but not limited to behavioral fatigue, which already threatens Iran’s efforts to limit the spread of disease.

Shia Rights Watch presents ways Shrines could have been used to empower nations against COVID-19 below. Note the below suggestions are interventions that can be taken previous to complete closure of all religious sites, regardless of their location.

Shrines are perceived to be trusted influences. Iran faces allegations of delayed action. Moreover, the continued movement between cities is a display of deteriorated trust in the government. Shrines as institutions could have been used as voices that educated prevention measures to the people. They could have been mediums by which policy-makers could have enlisted volunteers and extended resources.

Moreover, both Shrines in Mashhad and Qum are dedicated to martyred individuals. Thus, their history could have held potential in presenting the disease as a palpable threat.

Shrine-goers are members of a faith community. Research shows that within cohesive identity groups, prosocial action has higher rates of compliance relative to activities that benefit individuals. The residents of the tombs housed in the Shrines are valued for the lives they lived and their devotions to the greater good. The presentation of prevention measures as actions to protect other Shrine-goers could increase the compliance rate to behaviors such as hand-washing and social distancing.

Shrine-goers are prosocial volunteers. Historically, communities in proximity to the Shrines show great respect and devotion to these holy institutions and the people that visit them. Policy-makers could have enlisted devotees in efforts to reduce contamination and limit the spread of disease.

Shia Rights Watch values prevention measures that limit the spread of COVID-19. We further that implications of actions taken can be managed and foreseen with insight into the values of the community in which they are carried out.

Although Iranian authorities claimed the goal of the closure of Shrines in the country to be an act of social distancing, the aftereffect of the measure was counterproductive and even destructive to social wellbeing. Shia Rights Watch expresses its support for efforts that progress the health measure while also emphasizing insight into their long and short term social implications.