This monthly report will analyze the data compiled on Shia deaths, injuries, and arrests that occurred between August 1st and 31st, 2016. This month there were 334 deaths, and 67 wounded in the Shia community. Also 47 to 50 cases of arrest were reported.  Anti-Shia violations were reported in 9 countries during this month, however the reporters are aware that violations are not limited to what is being reported here.

As usual Iraqi Shia face the highest number of casualty and fatality due to bombing and explosions.

Bahrain has highest number of arrest as 31 Shia, including 16 clerics, were arrested.

The data for this report was gathered from a variety of different sources. The most well-known incidents of anti-Shiism were retrieved from stories that are reported to Shia Rights Watch by eyewitnesses, each incident is thoroughly evaluated for both authenticity and relevance. For an incident to be included in this report it has to show clear intent to target Shia Muslims and their communities.

Increasing pressure to Shia clerics in different countries such as Bahrain, Saudi Arabia and Afghanistan worries human right activists as they are the leaders of their communities.

Three Shia killed and One arrested in Afghanistan during August. Beside historically high violation toward Hazarah community, violation to Shia clerics has increased in Afghanistan. A Shia cleric, Yonus Alawi, was shot to death while returning from daily prayer at local mosque in Herat, And according to local Afghan media sources Taliban beheaded a Hazara, Khair Mohammad, student of Faryab College on August 21, 2016. He was travelling by bus when Taliban stopped the bus near Shirin Tagab, and after identifying him as Shia, dragged him out and beheaded him on spot.

In addition, Sheikh Ghorban Gholampour was arrested by Afghan authorities on August 22nd. No detail is available on his case yet.

A mass arrest happened on August 31st, as authorities arrested 12 to 15 activists and journalist from Hazara community during a protest about a major power transmission line during a visit to the area by Afghan President Ashraf Ghani. Witnesses report forces assaulted reports and arbitrarily detained them for 24 hours.

Systematic oppression of the Bahraini Shia continues on in the month of August but mostly in a form of arrest and pressure to Shia clerics. 30 Shia, including 16 Shia clerics, were arrested, one center attacked and 47 clerics summoned during this month.

On August 2nd, a Bahraini court postponed activist Nabeel Rajab’s trial until the 5th of September and denied his request for bail. Rajab’s defense team had requested his release over concerns about his health, but the court denied the petition.

On August 4th, a Bahraini court arrested and sentenced 2 Shia clerics to 15 days for participating in peaceful assembly in the neighborhood of Addar.

Bahraini police have arrested four Shia clerics. Sheikh Issa Momen, the Friday prayers leader of Khayf Mosque in the village of Dair, east of the capital Manama, was taken into custody on Saturday.  According to the report, police forces also detained Sheikh Ali al-Hamli, Seyyed Mohsen Qarifi and Sheikh Fazil Zaki in eastern Manama for questioning.

On August 8th, 12 people have been detained and charged with unlawful assembly over demonstrations near the home of a Shia cleric. They were arrested in Diraz in a sit-in in support of Sheikh Isa Qassim, who lost his citizenship in June.

On August 14th, Hani Basira was detained after being summoned for interrogation as the result of his participation in campaign that advocates for Shia clerics.

On August 15 Bahrain court charged Sheikh Maytham Al-Salman and activist and medic Dr. Taha Al-Derazi with illegal gathering accusation. Al-Salman has been released on bail, while Al-Derazi is remanded in custody. Numbers of other activists were arrested following the sit-in of August 14th, however no detailed information is available on their cases.

In another violation, Ra’as Roman, a Shia center was attacked and the management access to the center was limited  since the locks on the door was changed.

Increased pressure of Shia clerics in Bahrain is threatening the leadership among Bahraini Shia. SRW believe such leaders could be helpful resources to bring peace back to Bahrain only if this kingdom stops violating their rights.

On average 8 Shia were killed in Iraq as this country continues to have highest number of casualty rate among all countries with Shia rights violation.  Explosion and gunfire are mostly used methods of killing Shia civilians.

Iraq suffered 44 attacks in different cities this month alone. Most of the attacks occurred in Baghdad. Besides Baghdad, Mahmudiyah, Yousefye, Karbala, and Madaen were also highly targeted. 251 Shia were killed as the result of explosions and another 12 wounded. As many as 19 bodies also found mainly in Baghdad worrying Shia community even more.

The deadliest suicide bombing killed 23 in Ain al- Tamur, a town 40 kilometers west of the city of Karbala on August 30th. According to sources four suicide bombers had planned to explode their vest in different areas of the city; however officials arrested three of them after one bomb exploded.

Also, thousands of bodies found in more than 72 mass graves throughout Iraq on August 31st. Graves are located in different areas such as isolated mountains. Human rights activists believe ISIS is only group capable of such crime and victims belong to minority groups such as Shia Muslims. In addition to violation toward Iraqi Shia in their country, they are subject to violation elsewhere too. Shia Iraqi pilgrims were subject to verbal abuse, humiliation and unnecessary search in Medina airport, Saudi Arabia.  Saudi authorities also arrested number of group counselors because they found The Rules of The Pilgrimage book in their belongings. In some cases their luggage were ripped to be searched for Shia prayer books.

Reportedly 9 Shia minors that are threatened currently on death row. They are:

On August 31st, two Shia clerics were arrested in Qatif, Saudi Arabia. Mohammad Zain Alhdon and Jaafar Alawi were arrested, no explanation is given yet.

Shia rights violation is expected to increase in Saudi Arabia during Hajj season. In number of cases Saudi Shia were not give permission to participate in Hajj pilgrimage as Saudi authorities denies and limits their right to religion.

79 Pakistani Shia killed and 55 wounded in 4 separate attacks to Shia community in Pakistan.

On August 1st, a targeted attack killed Ghulam Nabi and Mohammad Nabi, two Hazara community members. No group or individual has claimed responsibility as of now.

August 4th, another attack to a bus, in Balochistan, carrying Shia pilgrims to Iran wounded 5 people.

The deadliest attack was on August 8th, as 76 people have been killed and over 50 others injured when a bomb exploded near Civil Hospital in Quetta on Monday. The blast, followed by firing was heard after president of Balochistan Bar Association Advocate Bilal Anwar Kasi was shot dead by unidentified assailants in Quetta

August 13th, Pakistani Shia residence of Dera Ismail Khan reported receiving a threat letter signed by ISIS demanding them to convert to Islam or be killed.

August 22nd, Targeted shooting in Pakistan claimed another Shia life as a 32 year old man was shot and killed on August 22nd.

According to number of news outlets, The Egyptian Initiative for Personal Rights (EIPR) issued a report on July 21 showing that there were 70 incidents of assault against Egyptian Shia during the period from January 2011 to May 2016. However no detailed report is available to activists. SRW contacted EIPR to obtain a copy of the report but received no response yet. Activists believe the agency is not willing to publish the report due to increased anti-Shia activities in Egypt and elsewhere. It is believed such report will endanger Shia population and the agency even more.

Kuwait court has sentenced a Shia Muslim lawmaker, Dashti, to 14 and half years in prison for criticizing the ruling families in Saudi Arabia and Bahrain. He strongly criticized the Bahraini regime’s repression of the opposition and Saudi Arabia’s deployment of troops in 2011 to Bahrain to assist the Al Khalifah regime in its crackdown on the peaceful anti-regime protests.

In May 2015, the Dashti called for the foreign minister to be questioned over Kuwait’s involvement in the Saudi-led air strikes on Yemen, which he said violated the constitution.

Madagascar has reported its first Shia killing as 19 year old was killed on August 9th.  No group has claimed responsibility yet.  Investigations are still underway.

Another Shia man, Eric Daya, was kidnapped on August 30th. There is no update on his case.

Shia community has lost members due to kidnapping previously. Oun Alac, another Shia man, was kidnapped last year and war never found. His family believe he is dead.

Anti-Shia cleric and a member of Kedah Deputy Mufti Sheikh Marwazi Dziyauddin suggested based on the Security Offences Act (Special Measures) 2012 (Sosma) law must be improved in order to stop spread of Shia teachings in the country. “Generally, we know even the police could not take action against individuals involved in the Shia teaching due to the legal constraints, therefore it is more appropriate that Sosma be amended to enable the authorities to do so” he stated in the National Security Dialogue Session at the Home Ministry Hall in Alor Setar. Anti-Shia activities have increased dramatically in Malaysia although freedom of religion is observed for all other minorities in this country. 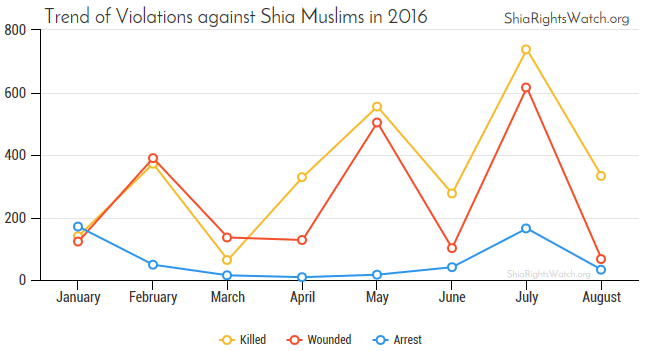 As many as 334 Shia killed, 67 wounded and, 47 to 50 arrested and 47 summoned during the month of August in 9 different countries. Anti-Shia violations also included attack to Shia centers, threat to be killed and call for more pressure on Shia communities.

Anti Shi’ism is on the rise in many countries. Shia Rights Watch condemns these acts of violence and urges the international community to put pressure on these governments who are violating these human rights. We must ensure that minorities are able to live a safe, fair, and just life within the communities they live all over the world.
*Note:

Shia Rights Watch has issued a Hajj 2016 Advisory to help Shia pilgrimage during their visit to Saudi Arabia as Shia rights violation increases during Hajj every year.