Incidents of Anti-Shiism in February 2016

This report will analyze the data compiled on Shia deaths, injuries, and arrests that occurred between February 1st and February 29th, 2016. This month there were 372 deaths within the Shia community. Compared with last month’s analysis, the death rate has greatly increased, which is a negative sign for the future wellbeing of this minority group. In fact, the death toll more than doubled from last month. There were several events which resulted in large death rates. One such event were suicide bombing in several suburbs of Damascus, Syria on February 21st, which killed 140 people. Another was a suicide bombing in Baghdad Iraq on February 28, 2016 which resulted in 78 deaths, 112 injuries, and 5 missing persons. The data for this report was gathered from a variety of different sources. The most well-known incidents of anti-Shiism were retrieved from stories that are reported to Shia Rights Watch by eyewitnesses. Each incident is thoroughly evaluated for both authenticity and relevance. For an incident to be included in this report it has to show clear intent to target Shia Muslims on the basis of religious beliefs. The subsequent sections will present and analyze the data gathered by Shia Rights Watch for February.

In February, Shia Muslims were targeted in six countries; Malaysia, Bahrain, Iraq, Pakistan, Syria and Saudi Arabia, There were a total of 315 deaths, 390 injured, and 55 arrested, as a result of anti-Shia hate crimes.  Although Shia human rights were violated in other countries across the world as well, this report lists those countries in which numerical proof of murders, injuries, and arrests are present.

This month Malaysia fell victim to four unlawful arrests.  Although Malaysia did not make it into January’s monthly report, it has been a source of many Shia rights violations in past months.  Four Malaysian Shia were charged under sections nine and twelve of Syariah Criminal Offences Enactment of 1997 for practicing their religion.

With a grand total of 227 deaths and 190 injuries, Iraq by far has the greatest amount of human rights violations against the Shia minority in the month of February. The amount of casualties in Iraq has increased exponentially since January with death rates being multiplied by four.  The attacks consisted of a combination of gunfire, suicide bombings, and other improvised explosive devices.

The February bombings occurred in various places including mosques, funeral services, markets, and grain silos.  Baghdad has been the main city where anti-Shia attacks have occurred this past month.

This month Malik Iftikhar Ali Haideri, was killed in Pakistan. He was murdered via gun by two unknown men on motorcycles.

This month a total of 143 Syrian Shia were killed and 200 were injured. This makes it the second highest for number of Shia rights violations this month after Iraq. The number of casualties has increased since January with the number of people injured and killed doubling. The most deaths occurred on February 21st, 2016  which two incidents happening,  a series of four bomb blasts which struck a suburb of Damascus called Sayyida Zeinab killing 83 people, and a bomb explosion in another suburb called Homs in which 57 people were killed.  These bombings also resulted in many injuries making February 21st the worst day this month for Syrian Shia Muslims.

This month there was 1 Saudi Shia death and 30 unlawful arrests. The Saudi government was responsible for both of these cases. The arrests were due to  unfounded accusations that thirty-two Saudis were spying for Iran (this number consists of thirty Shia).  These individuals were detained back in 2013 but were just put on trial this year. It should be noted that trial was kept private and lacked due process of law; both of these suggest huge government corruption as both of these practices in court are illegal.  SRW urges international powerhouses such as the UN to make sure that each and every nation uses fair and legal practices in all criminal court cases. 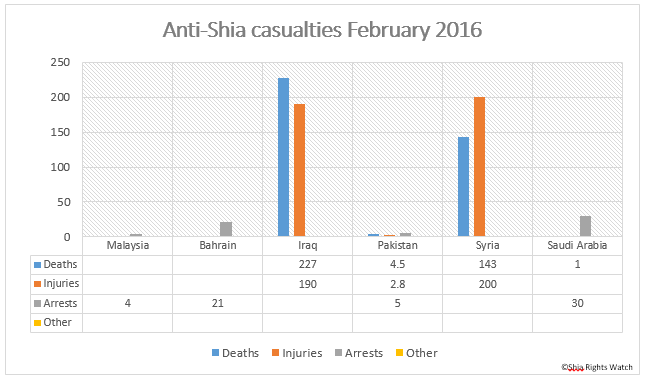 This month anti-Shia casualties have increased exponentially from last month, which means that despite the relatively good start to 2016, the Shia population across the world is still not doing well. Iraq was responsible for the most human rights violations against Shia Muslims, with Syria trailing closely behind. Malaysia, Bahrain, Pakistan, and Saudi Arabia are also mentioned in this report, but there is not nearly as much written about these places.  This could mean that these places had less violations, but it could also mean that their other violations have not been released yet.  The majority of deaths were caused by IED explosions, suicide bombings, and gunfire. Suicide bombings occurred in markets, mosques, funeral services, and more. There were also a large number of people arrested on grounds of “terrorism.” However, there is no proof of any sort of terrorist activities.

Although many of the perpetrators are unknown, ISIS has claimed responsibility for a great deal and the Saudi government was responsible for many within their own kingdom. Increased measures need to be implemented in order to combat ISIS, and the UN needs to be more responsible in making sure that the Saudi government cannot continue making obvious human rights violations.