Incidents of Anti-Shiism in January 2016

This report will analyze the data compiled on Shia deaths, injuries, and arrests that occurred between January 1st and January 31st. This month there were 140 known deaths within the Shia community. Most significant bombing  left seventy-one known deaths. However, news released from the Zaria massacre showed 705 people have been declared missing. The data for this report was gathered from a variety of different sources. The most well-known incidents of anti-Shiism were retrieved from stories that are reported to Shia Rights Watch by eyewitnesses. Each incident is thoroughly evaluated for both authenticity and relevance. For an incident to be included in this report it has to show clear intent to target Shia Muslims on the basis of religious beliefs. The subsequent sections will present and analyze the data gathered by Shia Rights Watch for January.

In January, Shia Muslims were victims in seven countries: Iraq, Bahrain, Nigeria, Pakistan, Azerbaijan, Saudi Arabia, and Syria. There were a total of 140 deaths this month, 123 wounded, 171 arrested, and an estimate of 705 people declared missing. The biggest news this month was the release of the 705 names of people declared missing after the Nigeria massacre last month.

This month saw a huge decrease in Shia deaths in Iraq, with only 55 people being killed, compared with last month which had 221 deaths.  Unlike in past months. The city in Iraq with the most killings was Muqdadiyah with twenty deaths, followed by New Baghdad, Baghdad/ Taji, and finally, South-east Baghdad. Most of the attacks in Iraq were resulted from bombs include suicide bombers, car bombs, and other bombs. The New Baghdad attack also had instances of gunfire attacks. ISIS later claimed responsibility for the attack on South-east Baghdad, but no one has claimed responsibility for the other attacks in Iraq as of now.

This month saw a huge increase on the amount of Shia Muslims arrested in Bahrain, with a total of 163. All of these arrests were sanctioned by the state with the unfair arrests being done by the Bahraini government, the Bahraini Security Forces, and the Bahraini Judicial system. The arrests done by the Bahraini Judicial system was a fifteen year extension for people already arrested following peaceful protests against the current regime. This extension was done on the grounds that prisoners were “disobeying orders” and “destroying furniture” at Jaw Prison. Protests against the currently regime have been common since 2011, making arrests a common occurrence in Bahrain. Also, according to the freedom house report, Bahrain is considered Not Free as they recently stripped many Shia Bahraini peoples of their citizenship. 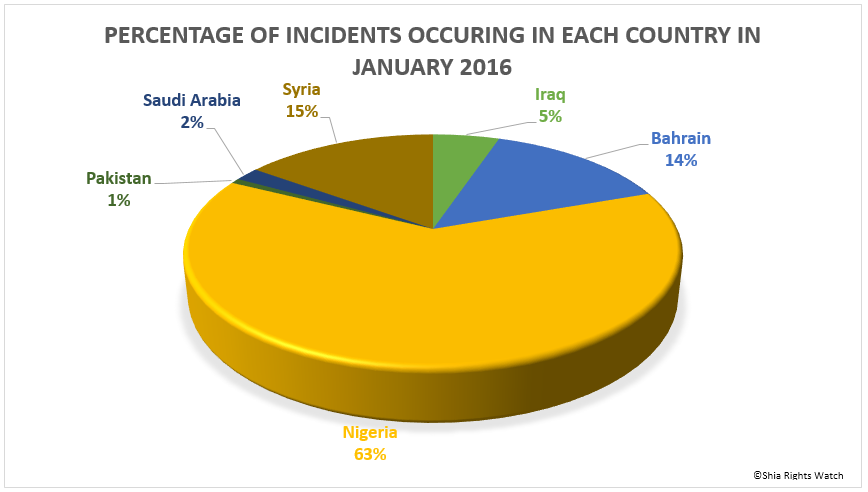 Nigeria also witnessed a huge decrease in deaths this month, with only approximately ten occurring in January. The deaths this month resulted from a suicide bombing attack on a Mosque in Cameroon by Nigerian militant group, Boko Haram. Following the Nigerian massacre that occurred last month, a list of 705 names was just released of all the people declared missing following that massacre. However, all that is known is their names, not which of these missing persons are still alive, nor where they are being held.

This month no Shia deaths occurred in Pakistan, which is great news, but there were eight people arrested by the Pakistani government. Innocent Shia youngsters and trustees of mosques/Imambargahs have been arrested by police in a raid from Mehmoodabad area of Karachi, Pakistan. All of these arrests occurred without any crimes or charges being made, making it a case of police terrorism, as locals have started calling it. Families of the arrested declared the government is demanding 2 Lac for the release of the prisoners, which is equivalent to 100,000 rupees.

Azerbaijan had a total of one injury in January. Shia Muslim theologian and prisoner of conscience Taleh Bagirov was subjected to “severe torture” including a broken nose while being held in detention at the Interior Ministry’s Main Directorate for the Struggle with Organized Crime since December 2015. Since being in jail, Bagirov has complained about severe torture in prison, not being allowed contact with his lawyer, and not being allowed contact with his family.

January saw a total of four deaths and eighteen people wounded in Saudi Arabia. This was an increase from last month in which neither deaths nor injuries occurred. The attack was due to a suicide bomber that targeted the Imam Rida mosque, a Shia Muslim mosque located in the eastern province town of Mahasen. No official claims of responsibility have been made, but this attack mirrors past ones by ISIS, making the Islamic State a strong contender. Security forces prevented the bomber from being allowed inside the mosque, but he blew himself up right outside of it, killing four people with him. 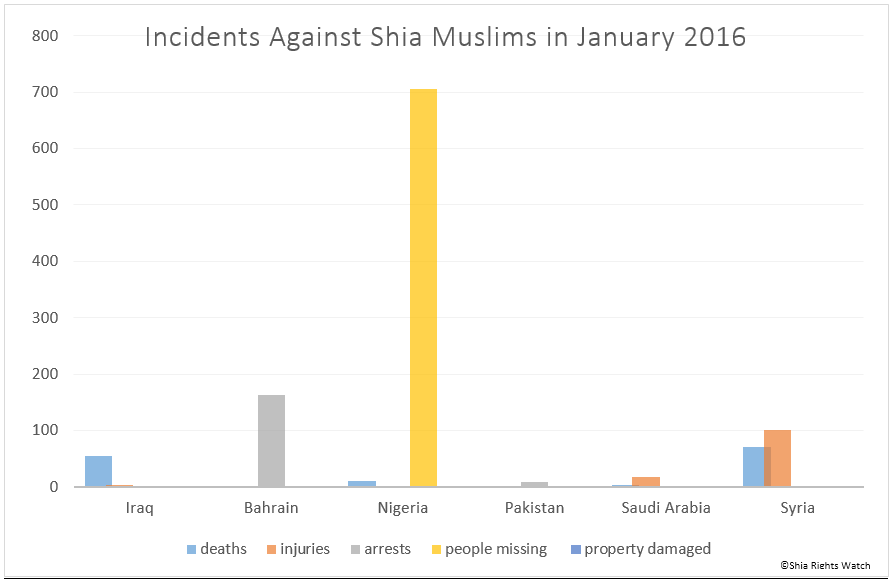 This month a total of seventy-one people were killed, and about 100 were injured following bombings claimed by ISIS near a revered Shia shrine, Sayyida Zeinab, outside the Syrian capital, Damascus. Last month Syria was not listed as a place which targeted Shia Muslims, which is a bad sign for the month of January. According to witness statements, there were either two or three bomb explosions; the first a suicide car bomber, and the following one(s) suicide bombers which released bombs into a huge crowd. These attacks also concluded in an estimate of 100 injuries.

As a whole, the number of Shia Muslims being targeted in January 2016 has exponentially decreased, which is a good sign for Shia Muslims across the globe. However, there is still a lot of work that needs to be done to make sure this group is completely safe as they have still been dealing with murders, unlawful arrests, injuries, and other instances of anti-Shia behavior by both their governments as well as militant/ terrorist groups such as ISIS and Boko Haram. It is upsetting to note that many of the bombs this month were set off during peaceful protests and mosque services. The Shia Rights Watch hopes that attacks against the Shia population will continue in this downward trend. The organization also wishes for the safe release of the 705 people declared missing following the Nigerian massacre.

Shia Rights Watch presents a monthly analysis of the trends of Anti-Shiism, as reported by …