Incidents of Anti-Shiism in January, 2018

Shia Rights watch continues its research and advocacy for the 7th consecutive year. The year 2018 began with the release of the SRW Annual Report, highlighting minority rights violations and the persecution of Shia Muslims. The 18-page report analyzed the state of the Shia Minority in relation to international events and presented a set of recommendations to reduce human rights violations as well as increase dialogue among conflicting parties.

In a single day, Bahrain stood witness to the arrest of 49 people; 290 others had charges filed against them. Two days later, on the 23rd of January, 18 others were arrested in peaceful protests against unlawful detainment of Shia Muslims in the towns of A’ali, Barbar, Maqabah, Samaheej, and Al Daih. The 31st of January marked the largest single event of anti-Shiism as 58 were sentenced; 19 were given life sentences, and the 37 others were handed a total of 400 years in prison.

Throughout the month, Bahrain was home to 106 arrests. Those arrested report incidents of torture and malpractice. In mid-January, 171 detainees were called to court- 141 of which were released on 200BD bail. The 24 remaining detainees were scheduled for a hearing in February. Sources report those who were released were initially held on charges of “illegal congregation” while those still in holding had charges of “attacking security men,” “damaging public property.” Sources furthered that those charges are only allegations and that officers have tried time and time again to obtain confession via coercion of torture.

The alleged charges used to detain Shia Muslims in Bahrain point to a systematic targeting of the group. Shia Islam by nature is a religion with the prominence of rituals that are done in masses. Charges such as “illegal congregation” are displays that any congregation can be deemed illegal given the government’s orders.

Bahrain displays trends of increased prosecution of religious clerics in the region. In 2017, over 300 incidents of anti-Shism against clerics alone were reported- 90 of which were arrests. Targeting of clerics continued into 2018 with the arrest of numerous prominent clerics active in Bahrain.

Overall, there have been 493 cases of anti-Shiism in Bahrain- 120 of which are arrests and 69 are sentencing. Other forms of anti-Shiism include raids, deportation, denial of medical care, revocation of citizenship and police brutality. Attacks have been reported in the towns of Diraz, Sanabis, Sitra, Dumistan, Karzakan, Abu Saiba, Buri, A’ali, and Shakhura.

As a result of direct anti-Shiism, 48 have lost their lives, and 109 others have been wounded. Baghdad remains one of the most unsafe areas of Iraq.

Sources report approximately 70% of Baghdad is of the Shia faith, and in January, Shia populated areas of Baghdad saw an average, the death of 5 people as a result of anti-Shiism. The single most significant attack in Baghdad was a series of suicide bombings in Tayyaran Square where 38 civilians were killed. Attacks in Baghdad are primarily centered in Shia populated commercial areas such as shopping centers and markets.

Detailed reports of Anti-Shiism in other cities of Iraq are limited due to the lack of technological development of said areas. Information in regards to the reduced overall anti-Shiism across Iraq, in consistency with reporting from the United Nations, can be found on ShiaRightsWatch.org.

Following the arrest of Sheikh Ibrahim Zakzaky in Kunduna State, Nigeria, protests have erupted all over the world. Zakzaky was arrested along with his wife, Hajia Zainab Zakzaky,  in 2015 as part of the national government’s efforts to thwart the rise of Shia power in the nation. From the United Kingdom to Turkey, Shia Muslims congregate in protest of prosecution of Shia Muslims in Nigeria.

Zakzaky’s daughter reports her parents have deteriorating health. Until early-January, the Zakzaky couple were denied medical care and media correspondence. On the 13th of January, Sheikh Zakzaky was allowed to speak to the press after two years. In his talk, he confirmed that he was allowed to see a medical doctor and that his ailments were being treated. SRW believes Zakzaky was permitted contact with the media after unrest in the nation in response to his maltreatment while detained.

After the couple’s arrest, a panel of investigators set by Nasir el-Rufei, the state governor, concluded that Zakzaky had been arrested on illegal grounds. Later, the Abuja division of Federal High Courts ordered the release of the Zakzaky’s, awarding them 50 million NGN and temporary accommodations as reparations for crimes against them by the state. However, despite the judge’s order, the couple remain in detainment.

In January 2018 , Femi Falana, the couples lawyer, filed a Contempt of Court proceeding against the Director General of State Security Service, the Nigerian Police Force and Attorney General of the Federation (AGF) for failing to obey the judgement of Justice Kolawole of the Federal High Court Abuja with regards to the continued detention of Sheikh Zakzaky.

Late in the month, a van carrying Shia Muslims from the Afghan border was targeted by an IED. Eight people were killed, three of which were women and one of which was a seven-year-old boy.

Shia Muslims in Pakistan unite in protest of the lack of prosecution of anti-Shia agents in the nation. All over Pakistan, Shia Muslims have organized protests, marking their intolerance towards extremism against religious and ethnic minorities.

As a result of increased protests, Shia Muslims were included in the Apex Court of Pakistan as minority groups targeted by terrorists in the area. This recognition is considered a milestone in the struggles for rights as Pakistan has displayed systemic discrimination against Shia Muslims in the past. SRW hopes that this identification can be a step towards increased security for this group.

Additionally, January stood witness to the appointment of Agha Syed Mohammad Raza as the nation’s first Shia legislator to be appointed as minister in Balochistan, Pakistan.

Despite what seems to be a reduction of violence in the town of Awamiyah in comparison to mid-2017, Shia in the Eastern Province of Saudi Arabia is still subject to brutality. Passer-by vehicles going to and from Awamiya are at risk of being shot or subject to questioning. One such incident was the case of Abdullah al-Qallaf who was shot driving his car in the town. Al-Qallaf has no history of dissent or political involvement. Sources report al-Qallaf may have been a victim of a mis-target on the part of troops who were targeting political activists.

The main Saudi narrative is that the government is at qualms with the political dissent in the nation- regardless of religion or ethnicity. However, the prominence of non-politically active victims points to the targeting of Shia Muslims based on a stereotype of Shia being foreign agents. Shia Rights Watch condemns any and all acts of violence, noting the degree of damage caused by mis-association of Shia Muslims, particularly in Gulf Nations.

Also new in January 2018 is the cessation of arms sales to Saudi Arabia by Germany. Once one of the largest arms dealers in the Kingdom, the German government announced it would no longer export arms to nations waging war in Yemen. Saudi Arabian involvement has created one of the most extensive modern-day war crimes- 5,200 civilians killed and 9000 others injured as direct results of Saudi weapons, not the mention the famine and disease that spreads like wildfire as a result of reduced resources in the nation. 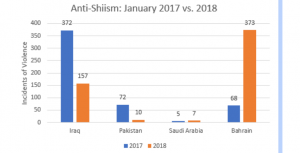 Compared to January of 2017, there has been a  computational 6% increase in violence has been seen against Shia Muslims. The rise in violence can be a result of quintupling of anti-Shiism in Bahrain. Despite international efforts, Shia in Bahrain remains prosecuted for their religious beliefs. Time and time again, peaceful protests are met with violence. Further, an increase in arrest and prosecution of Shia clerics are seen in the nation.

Another significant comparison is in the case of Iraq in which a reduction of anti-Shiism can be seen. The same trend can be observed in United Nations reports. Since the beginning of 2017, a slow but steady decrease in violence against Shia Muslims can be found. SRW believes a reduction in local reports of abuse in minor cities accounts for such a trend. Attacks in Baghdad make up a significant portion of the statistical data of Anti-Shiism in Iraq.