Incidents of Anti-Shiism in July 2015

Incidents of anti-Shiism in July 2015

There was a significant increase in both the number of Shia killed and those that were injured during attacks. There was a decrease in the total amount of Shia arrested or abducted, but there were abductions this month as opposed to last month. There were over 450 deaths and more than 550 injuries this month. These figures result in an average of more than 14 deaths per day, and almost 19 injured Shia every day. Violence against Shia is present in eight countries this month, and all of the countries have been in previous reports at some point.

This report will analyze the data compiled on Shia deaths, injuries, and arrests that occurred between July 1st and July 31st. The data for this report was gathered from a variety of different sources. The most well-known incidents of anti-Shiism were retrieved from stories that are reported to Shia Rights Watch by eyewitnesses. Each incident is thoroughly evaluated for both authenticity and relevance. For an incident to be included in this report it has to show clear intent to target Shia Muslims on the basis of religious beliefs. The subsequent sections will present and analyze the data gathered by Shia Rights Watch for July.

July saw Shia Muslims targeted in 8 different countries: Iraq, Pakistan, Saudi Arabia, Yemen, Nigeria, Bahrain, Syria, and Afghanistan. In total there were 454 deaths, 588 injuries, 11 arrests, and 18 abductions that we are aware of. Although this report will focus primarily on the violent incidents, Shia Rights Watch would like to take this time to congratulate the Bahrain Government for listening to the voice of their people and the international community with the pardoning of Human Rights Activist Nabeel Rajab. This is an important step forward in giving Shias their natural rights, and will hopefully lead to the release and/or pardoning of Sheikh Ali Salman. In the wake of the Kuwait terror attack, Sunni and Shia prayed together during Eid and built unity instead of furthering sectarian tensions. This is a great example of a government taking active steps to defuse tense situations.

Iraq continues to top the charts for violence against Shia Muslims, and this could be a result of the large Shia population so close to the war against the Islamic State of Iraq and the Levant. Baghdad is usually the stage for attacks, because it is right near Anbar province which ISIL uses as a base. The population of Baghdad used to be a more mixed population, but the neighborhoods have become increasingly divided along sectarian lines. This gives ISIL the opportunity for a network of allies within the city to carry out their bombings of markets nearly daily.

The worst attack this month was orchestrated by ISIL, and occurred in the Shia town Khan Bani Saad which is north of Baghdad. On July 17th, the terrorists drove a car into a busy market and detonated it. The attack killed 120 people and injured at least 130. The one bombing accounted for more than a quarter of the Shia deaths in Iraq this month and 23 percent of the Shia injuries. The Iraqi Army, Special Forces, and militias continue to fight ISIL, but the effort to destroy them in Anbar province will be difficult with the mainly Shia forces liberating Sunni neighborhoods. 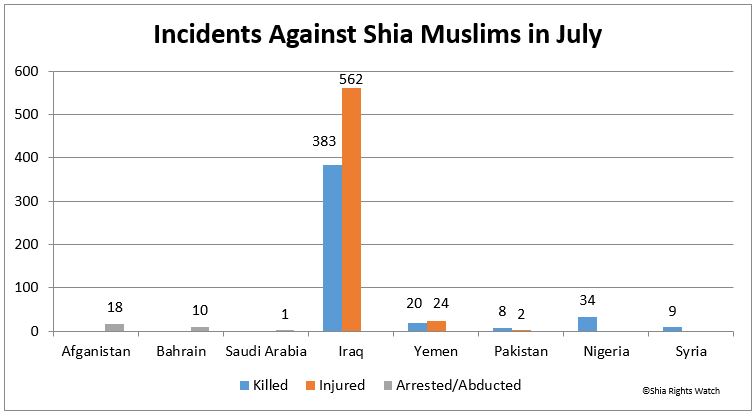 There were five incidents of anti-Shiism in Yemen this month, and four of them were bombings carried out by the Islamic State of Iraq and the Levant on Shia mosques. The final incident was a result of the continued Saudi Arabian led coalition’s air strikes against civilian populations in Yemen. If these air strikes were targeting the Ansarallah movement (the Houthis), then they were extremely far off their mark.

There were five incidents of anti-Shiism in Pakistan this month that we are aware of which killed eight Shia and injured two more. Although they utilized both explosives and guns to attack Shias, the only bomb attack failed to hurt anyone besides the guard who stopped the suicide bomber at the entrance to the neighborhood. The amount of Shia killed and injured in Pakistan is nearly identical to last month’s, and it seems that Pakistan has taken a step in the right direction in protecting the Shia minority from Takfiri terrorists.

There was one incident of anti-Shiism that Shia Rights Watch is aware of in Nigeria this month, but more information is always welcome. There are reports of military personnel killing 34 peaceful Shia protestors during a pro-Palestinian rally on al-Quds Day. The reports were unclear on how the protestors were killed, but the personnel must be held accountable for their actions. One might wonder why the Nigerian military was in Zaria when the President of Nigeria has declared that he would destroy Boko Haram more than 700 kilometers to the East.

The other force trying to take hold of Syria besides ISIL is Al Nusra Front, and they attempted to gain control of one of the few villages in Idlib Province that they do not already control. Al Nusra failed to take the villages of Fuaa and Kafraya with ground troops, and resorted to rocket and mortar attacks. This resulted in the death of at least seven Shia villagers and hundreds more injured from the hundreds of artillery shells. The Syrian Civil War has continued for years, and seems it will continue until one side gains an edge against the other two. In the meantime, civilians are caught in the crossfire and the humanitarian situation becomes worse every day. 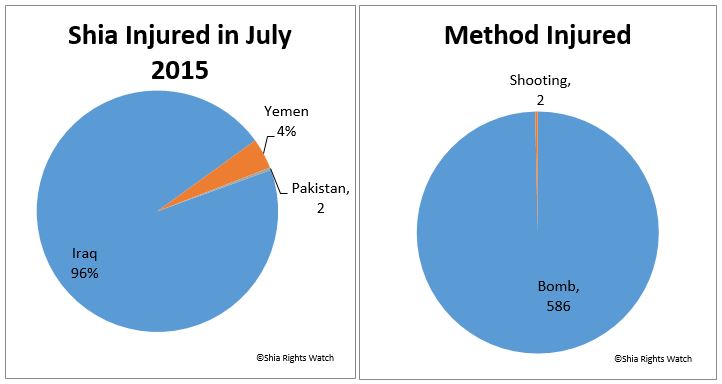 On July 25th, the more Shia Hazaras were abducted at gunpoint when their car was stopped in Baglan province, and all 18 Shias were taken. Five of those kidnapped have been returned to their families, and the Afghan authorities are negotiating for the release of the remaining Shias. This could be the work of the Taliban or the ISIL branch in Afghanistan. ISIL has gained members from the Taliban and Al Qaeda, because the groups were not extreme enough. However, the Taliban leadership is not in control of all of their members and branches so the possibility of this being a Taliban or ISIL kidnapping is likely.

Bahrain regime forces have been otherwise tame this month compared to last month, because there were 10 Shias arrested as opposed to the 58 in June. There were 6 incidents of anti-Shiism this month in Bahrain, and they came in the form of arresting people of the opposition party, breaking up protests with tear gas, as well as arbitrary arrests. One of the cases is that of Mustafa Mohammed who just graduated from high school in Bahrain with a near perfect grade point average. He was stopped by security forces outside of his grandfather’s home, and charged with illegal gathering. He was going to go to school to practice medicine, but then he was sentenced to six months in prison. Thankfully the sentence was reduced to three months, but he should not be in jail to begin with. The Bahraini government must take steps to make peace with its Shia community in order to curb sectarian hatred.

There was one incident of anti-Shiism in Saudi Arabia this month, and it was the arrest of a man for holding weekly prayers in his home. Saudi Arabia claims to protect the right of Muslims to pray in public, but the Salafi sect of Islam declares Shias non-Muslims or apostates. Even if the Saudis were correct, they claim to protect the right of non-Muslims to worship in private. Yet Shia Muslims are forced to pray in private, and treated as criminals for expressing their freedom of religion. Shia Rights Watch condemns this blatant violation of freedom of religion, and urges Saudi Arabian religious officials and police to practice what they tell the international community they do.

The amount of Shia killed by bombs this month has increased by at least 35 percent, and the amount of Shias wounded from bombs has increased 14 percent from last month. Terrorists began using mortars and rockets again, and those have not been used since May (most recent). The deaths from shootings doubled this month compared to June, and this month there were injuries sustained from gunfire. Terrorists began abducting the Shia Hazaras again which hasn’t been seen since April. The utilization of a combination of methods to kill Shia has nearly doubled from 32 to 60. The Saudi Air Force and Gulf Coalition continue their air strikes in Yemen which led to more civilian bloodshed. Although the reported numbers are less than last month’s, it is important to remember that it is difficult to get information in or out of the country in its current state.

It is refreshing to see governments like Kuwait and Bahrain taking positive steps forward, but Bahrain still has work to do. The Saudi Coalition have gained a foothold in Aden which will allow humanitarian aid to flow into Yemen, but it is unclear if the violence against civilians will decrease over time. Turkey has joined the coalition forces to help defeat ISIL in Iraq and Syria, and hopefully this will lead to a swift defeat of ISIL. Only time will tell if the steps being taken now will help or hurt the human rights situation for Shias around the world.