Incidents of Anti-Shiism in March, 2016

This report will analyze the data compiled on Shia deaths, injuries, and arrests that occurred between March 1st and March 31st, 2016. This month there were 466 deaths within the Shia community. Also 15 cases of arrest were reported.  Anti-Shia violations were reported in seven countries during March 2016.

As it was expected Iraq has the highest number of civilian killing due to bombing and explosions. Highest number of arrest took place in Bahrain and most deportations are from Kuwait.

Beside killing, arrest and deportation, attack to religious gathering, and ban of Shia call to prayer was reported.

The data for this report was gathered from a variety of different sources. The most well-known incidents of anti-Shiism were retrieved from stories that are reported to Shia Rights Watch by eyewitnesses. Each incident is thoroughly evaluated for both authenticity and relevance. For an incident to be included in this report it has to show clear intent to target Shia Muslims on the basis of religious beliefs. The subsequent sections will present and analyze the data gathered by Shia Rights Watch for March.

Pressure on pro-democracy advocates continues Bahraini authorities arrest and detain peaceful protestors on daily bases.  In month of March daughter of political activist, Zainab al-Khawaja, and her one year old baby were detained by the Bahraini government.

In addition, Bahraini autoritaires  arrested ten people during a protest in Manama. The arrested individuals were found guilty of being involved in « terrorist plots », and resisting police.  Four of them were given lifetime sentences while the rest of them were given between 3 and 15 years.

Déportions also continues as the government deported several Lebanese on the accusations of them having ties to militant groups. According to reports, so far 7 Lebanese families were deported on grounds of this. Dr. Masood Jahroomi was forced deportation by the government after having his citizenship taken away. He was arrested in 2011 and was detained five months before being given a sentence. Bahrain has been on human rights activits’s radar since the Arab Spring and violations has not decreased nor prevented since.

Tuesday March 15, 2016 Top Shia preacher, Abdur Razzak, aged 48, was hacked to death on his way home from his shop in Kaliganj town in Jhenaidah district. Although the attack was later claimed by ISIS. police say it wasn’t ISIS. He was declared dead later that night at Kaliganj Upazila Health Complex.

According to the head of the Shia School in the district, Abdur Razzak has been a member of the Shia community at least 20 years. Right before the murder, he received threatening calls from drug dealers who believed him to have helped arrest them months previously.

Bangladesh is not known to have large Shia population. Any violation  must be carefully examined in order to prevent future crises.

Iraq continues to top the list for violence against Shia Muslims, and this could be a result of the majority Shia population and present of ISIS in this country.
As many as 377 civilians have been reported killed in Iraq in the month of March. Improvised explosive device (IED), gun fires, execution by ISIS, road bombs, and suicide bombers are responsible for the death toll. Violators use busy markets, funerals and religious gatherings to target civilians.

In 2015 more than 5000 people were killed and another 5000 injured in Iraq and the trend continues this year. The government and anti-ISIS coalitions have failed to protect civilians so far.

This month Pakistan had three murders, one arrest, and one injury according to our reports. The violation in Pakistan mainly occurred by gunfire against Shia activists.  In the most devastating incident, Professor Abid Raza, school principal of ICMS school system was shot by four terrorists of Ahle-E-Sunnat-Wal-Jamaat. He was attacked on his motorcycle by another cyclist. Video of the attack can be accessed by contacting SRW, but won’t be published due to graphic scenes. Another two Shia were killed in Dera Ismail Khan and one was attacked and killed in Charsadah.

Rizwan Haider was arrested under blasphemy laws and sentenced to 13 years in prison.

Shia rights violations have long history in Pakistan. Shia minority have always been attacked and killed on daily bases and the government has not taken steps to prevent the killings.

This month Saudi Arabia had seven deaths, two arrests, and a case of limited religious prayer

Makki Ali was arrested at the checkpoints and then detained in Awwamiyya district police station without any explanation.  Securities denied his detention at first, but released his dead body after four weeks of his death. SRW’s investigation on the body revealed that Makki was subjected to severe tortured before he was killed.

The gouvernement also arrested a Shia cleric , Hussein al-Radhi, shortly after he led prayers in the al-Ahsa oasis region of Eastern Province.  The detention came after the senior cleric wrote an article in which he criticized the authorities for jailing and executing critics and dissidents, including Sheikh Nimr Baqir al-Nimr who was beheaded in January. Saleh Ghanim is another detainee who was arrested becouse he expressed the need to protect SHia mosques in Saudi Arabia.

Saudi Arabia is known for its support to ISIS and anti-Shia ideologies. 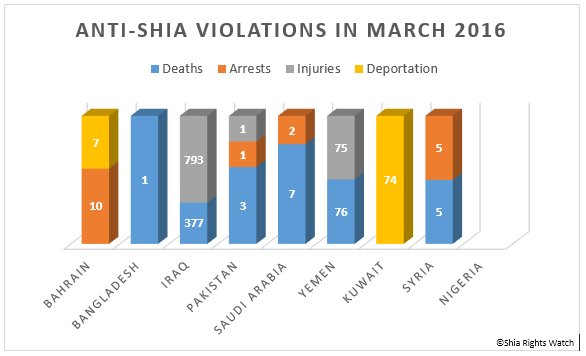 This month, the Kuwait government deported 74 Shia Muslims. All people deported are falsely accused of ties to Hezbollah. Most of those deported had Iraqi and Lebanese nationalities. This country has deported number of Shia Muslims in the past with the same accusation. Such accusations were never investigated and proved.

This month the Nigerian government was guilty of blocking a religious procession in honor of Muhammad’s daughter. The violation occurred Wednesday March 30, 2016. The procession, named the Sayyada Zahara Maulud procession, is an annual event by the movement to commemorate the birth of the prophet’s daughter, Fatima.  According to the movement’s leader, ten armed security guards rolled up to the protest and started taking away their flags, signs, etc., making people very fearful.  The governor stated that he did not mean to deny their religious freedom, but they could not tolerate religious events at public property. The procession began at 8am at the central mosque.

Causality cases against Shia Muslims were increased during March compared to February. Bahrain, Pakistan, Iraq and Saudi Arabia that are covered in this report, have known history of violations against Shia. Thousands of Shia Muslims have lost their lives in mentioned countries combined and hundreds, including minors, are unlawfully detained.