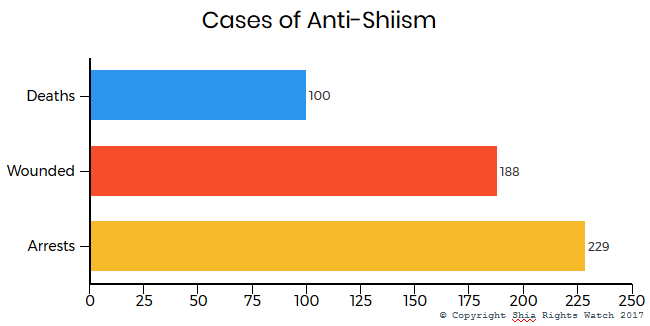 Incidents of Anti-Shiism in September , 2017

Shia Muslims all over the world began their commemoration of the holy month of Muharram late September. Shia religious expression is augmented in the beginning in early Moharram thus making them susceptible to targeting by anti-Shia groups. SRW Muharram safety advisory and more information on Shia and Moharram can be found on ShiaRightsWatch.org.

In Gulf nations such that of Saudi Arabia and Bahrain a fresh wave of arrests and travel bans have been issued. This recent increase in crackdowns correlates with the 2017 United Nations Human Rights Council meeting. The analyst believes restrictions are in an attempt to limit reports of anti-Shiism in the meeting.

Overall, 517 cases of anti-Shiism have been seen in the month of September-100 deaths, 188 injuries, and 229 arrests.Trends of anti-Shiism are nation-specific. Gulf-nations, Saudi Arabia, and Bahrain have had Shia arrests, detainments and travel bans. Iraq and Afghanistan are home to the targeting of Shia dominated routes of travels as well as well-known religious sites.

Trends in anti-Shiism have been perpetrated by ISIS extremists. However, in addition to targeting Shia populated areas, incidents in September display a shift in targets. Twin blasts in Hajaj, Salahedin province, targeted a restaurant frequented by Popular Mobilization Forces (PMF), a prominently Shia anti-ISIS group. A third assailant was shot before the detonation of his suicide belt.

Recent attacks target Popular Mobilization force members and their families. Even when not on duty, members of the PMF are followed and killed. While ISIS killings have been, and continue to be bombs that target a large mass, there exists a recent shift towards individual assassinations by firearm.

The prevalence of restrictions on religious expression and congregation in Bahrain sets this report apart from previous reports. Beginning early September, Bahraini officials called upon religious scholars and centers ordering limitations in visibility and restriction of religious expression to inside religious centers. The ministry of interior furthered that failure to meet the new guidelines will result in detention and torture. Days following the threats, security forces raided numerous Shia villages, namely Shahrakan, Jid Ali, Malkiya, Ekr, Abu Saiba, Shakhura, Sitr, and Karzakan, removing visible banners, posters, and flags that mark the commemoration of Muharram. Also, any and all civil services such that of food and drink donations have been placed under scrutiny. Shia Rights Watch sources report forces ripping down Muharram symbols (flags and banners) in different towns, even arresting people who displayed the symbols. Some of those arrested were released after forced agreements to stop displaying Moharram symbols.

In the town of Diraz, in addition to tearing down commemoration signs, forces stopped commemorators from attending Imam al- Sadiq mosque. It must be mentioned that Shia in Diraz remains banned from holding Friday prayers.

Prominent activist like (but not limited to) Farida Ghulam, Jalila al-Salman, Mohammad Issa Al-Tajer, Fatimah al-Halwaji and Hussain Radhi has been placed on travel limitations and summoned for questioning by the Bahraini public prosecutor. In addition to activists themselves, a family of activists has been used as leverage against activists. On numerous account were family members of human rights activists called upon in local and national police stations.

Despite immense attempts by the Bahraini government to limit Shia presentation at the United Nations Human Rights Council held this month, human rights activists were still able to deliver oral statements, reporting discrimination and systemic targeting of the Shia majority in this nation.

Despite the prevalence of arrests and torture, morale remains high among inmates and activist. In mid-September, over 1500 detainees announced hunger-strikes in protests to the ongoing torture and ill-conditions of detainment centers and prisons in Bahrain. The current hunger strike in Bahrain is the biggest mass hunger-strike in recent history. 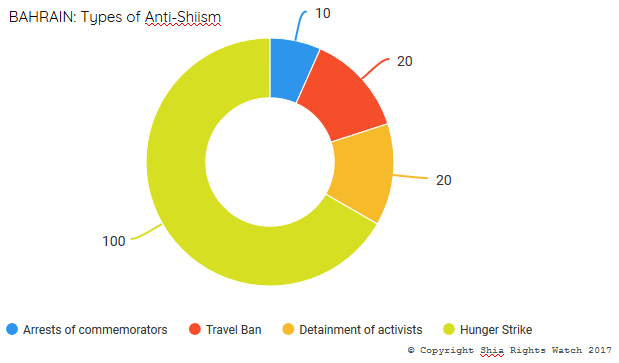 September in Saudi Arabia has been especially dangerous as fresh waves of arrests have taken place. On the one hand, Shia in this nation continues to be prosecuted based on their religious expression. Government forces restrict religious practices by prohibiting congregation.

In correlation to the United Nations Human Rights Council dates, activists have been detained and imprisoned. Members of the Civil and Political Rights Association (ACPRA), Abdulaziz al-Shubaily and Issa al-Hamid were arrested late September. Sources report their arrest linked to convictions as recently as early 2016, suggesting the recent arrests as a means of restricting the activists from engaging with activists presenting in the United Nations Human Rights Council in aims to shed light on anti-Shiism in the kingdom.

A 62-page report by Human Rights Watch (HRW) sheds light on the propagation of hate-crime of Saudi clerics. The report notes the labeling of Shia as “rejectionists” and “brothers of Satan,” as well as denouncing of systemic discrimination of this population. Lastly, HRW traces hate-crime by terror organization such that of al-Qaeda to the kingdoms propagation of hate.

Sources report negligence on the part of regional governments to meet a need for the seasonal increase in activity. Shia Muslims feel their operations have been “impeded” by lack of procedural security measures and basic access to electricity and local management.

Cases of prosecution due to allegedly “blasphemous”  social media posts continue in this nation. The US Commission on International Religious Freedom reports that 40 people are on life-sentences, some on death row, on charges of “blasphemy.” Trends of increased religious and ethnic minorities charged on the grounds of this law show that this law is used as a means of limiting expression and speech in the nation.

Targeting of minority groups by extremist groups continues to rise. Shia Rights Watch demands a re-evaluation of Pakistan’s anti-terror efforts as they are misdirected and ineffective.

Government forces arrested 200 Iraqi Shia residents for attending Muharram commemoration. All arrestees are university students in Kuala Lumpur. They were released after Iraqi government pressured and criticized Malaysian authorities.  Historically Shia in Malaysia has been under pressure by the government as all Shia practices, publications and educational materials are banned in this country.

An explosion in Kandahar kills six civilians on September 18. The nature of the crime point to Taliban insurgency.  Another explosion killed 10 and wounded 16 on September 29th as Shia prepared for Ashura commemoration in Kabul.

Shia in Afghanistan continue to be treated as second-class citizens as prosecution for anti-Shia groups are yet to take place. Shia frequently reports a systemic discrimination in hate-crime cases.

Shia Rights Watch demands a report on Afghan government’s efforts to reduce anti-Shiism and targeting of religious minorities as they remain ineffective.

Shia in India report feeling limited as government resources promised to them has been delayed. SRW sources report feelings of anger as people feel cheated for state services, particularly as they have kept will meet all government requirements and have respected local laws.

Moharram processions are a multicultural and multi-religious activities in India.

The Religious Endowment Ministry closed the tomb of Imam Hussein on Saturday, to prevent any Shia Muharram commemorations. This center has been subject to closure before by the authorities in the past. Information on Shia in Egypt and the nation’s history of anti-Shiism can be found on ShiaRightsWatch.org

The month of September stood witness to at least 517 cases of anti-Shiism. Shia Muslims continue to live in fear as they are ostracized in their home nations, and arrests of Shia activists and scholars proceed in the Gulf states and the surrounding countries.

Violations are expected to increase in October and November as Shia Muslims participate in Muharram commemorations. Activists and humanitarians who are standing up to the injustice are facing the backlash from governments and other principal actors. Shia Rights Watch calls for governments across the region to increase protections for Shia and other religious minorities and to reverse and stop all ill-treatment of these populations.