Home / On the Press / Editorial / Rationality Behind the Formula?

Rationality Behind the Formula?

Last week I posted an article about my journey to finding a formula to Shia targeted killings. Since the formula is created by humans, then I would expect some sort of rationality behind it… so I began examining the history and also recent world activities.

The rationalities I found are very funny. Here goes the list:

1)Rationality: The world should be cleaned from Shia Muslims …..so anti-Shia think they can kill ALL Shia Muslims in the world?

My Question: Really? All of them? So they are willing and ready to kill about half of all Muslims?

2)Rationality: Shia Muslims are infidels so they deserve being killed.

My Question: 1st that is not a true statement and 2nd are there no other infidels left in the world, and Shia are the only group left to be killed?

3)Rationality: Shia are minorities and the world is a better place if we are all one big alike group.

My Question: Are Shia only minorities and by killing them the world would be made up all majorities? What will happen to all the other minorities? Can anti-Shia terrorists even imagine a world in which everyone is alike?

4)Rationality: Shia Muslims are trying to take away kingdoms and governments?

My Question: Did Shia ever asked or demanded power? Beside even in Shia governed countries violate Shia rights are being violated.

My Question: HHMMM, I wonder why?

Maybe because they do not even know Shia, after all, humans are scared of what they don’t know.

I tried to put my foot into ant-Shia groups shows and all the rationalities I figured are irrational a …..

I know Shia Muslims’ only demand is freedom to be who they are and practice what they believe in peacefully, away from violence and killings.

Is that too much to ask??

By Hawraa, Human Rights Activist and Specialist   on August 6, 2013 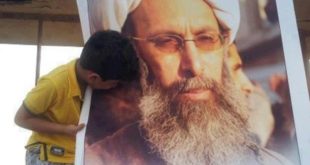 January 2 marks the anniversary of the execution of Sheikh al-Nimr, a prominent leader in …