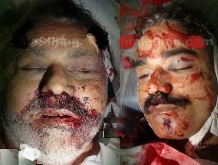 Former president of the Malir Bar, Salahuddin Haider Jafri and his son Ali Raza were killed in an ambush on Saturday.

According to police, Salahuddin left home for work with his son when Wahhabi terrorist gunmen opened fire on his vehicle near Azadi Chowk in Landhi, leaving them injured. Both succumbed to their wounds on way to the hospital. Their bodies were shifted to Jinnah Hospital for medical formalities. A large number of lawyers rushed to the hospital. It was learned that Mr. Salahuddin belonged to Sindh Shia Organization.

Allama Hassan Zafar Naqvi said that the government has failed to protect the lives of Shia Muslim Pakistanis. He said that the murders of father and son and firing on a trustee of Masjid were proofs of government’s failures.