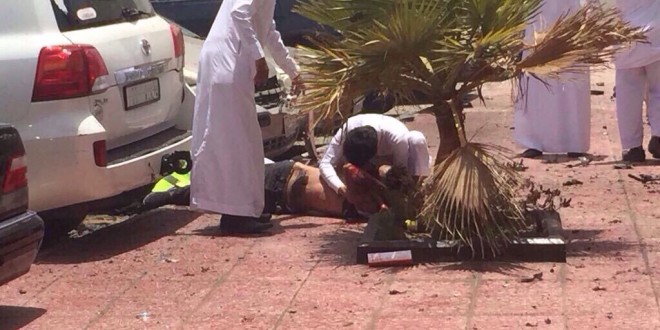 One week after the deadly suicide bombing in Qatif that left 21 people dead, including two children, an alleged suicide attack has struck outside a Shia mosque in Dammam, eastern Saudi Arabia, during Friday prayers on 29 May.

According to Saudi interior ministry four people were killed and many injured after a car exploded in a parking lot near the Imam al-Hussein mosque in Dammam. The bomber detonated his explosives after being stopped by security guards. The alleged suicide bomber was disguised as a woman and attempted to blow himself up inside the women’s section of the mosque.

In March 2011, Qatif was the center of demonstrations against what minority including Shia Muslim perceived as decades of discrimination and religious and political repression from the Wahabbi kingdom. Since then, many have been killed and couple hundreds imprisoned including leaders such as Shikh Nimr who is expecting excursion any day.

There are more than 2.7 million Shia in Saudi Arabia, most living in al-Ahsa and al-Qatif districts in the country’s eastern province, which also contains the bulk of the kingdom’s oil.

Bahraini kingdom sentenced Khalid Abdul Aal, former MP, to one year in jail after criticizing tweet back in April 2014. The former lawmaker said that the sentence proves lack of freedom of speech in the country.

Bahrain’s anti Shia strategies has resulted in many death, imprisonments and unrest in this monarchy.

Shootings in Quetta resulted in four deaths and eight injuries. A gunman opened fire at a coffee shop killing one and injuring one. Another incident involved two motorcyclers opening fire to line of doctor patience’s killing two and injuring four.  Later on, unidentified armed men opened fire at two separate buildings on Jinnah Road in minutes apart, leaving three people dead and nine others injured. Shia of Hazara community have always been target of hatred killings and attacks.

Gunman Killed one in Pakistan

A gunman attacked traveling family in their car killing one and wounding two in Pakistan’s Khyber Pakhtunkhwa province. Police confirmed that the targeted victims belonged to the minority Shia community who have been under attack in this country. No group has claimed the responsibility yet and most of such cases are not investigated by the government.