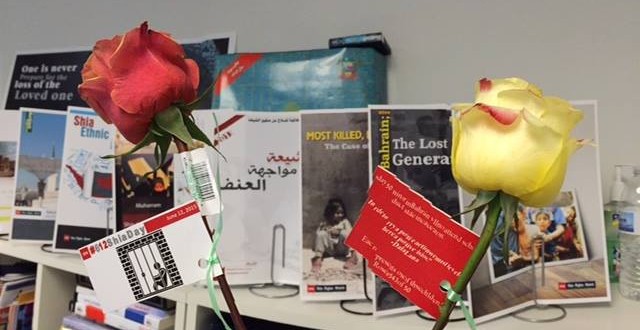 Shia Rights Watch staff, volunteers and interns        commemorated Shia International Day in the heart of  Washington DC, Farragut Square and Dupont Circle. 1200  roses were distributed along with a messages of carrying for  Shia children victims in Bahrain.

In memory of the June 12, 2014 attack on Camp Speicher in  Iraq, Shia Rights Watch has declared June 12th the  International Day of Shia Rights. The International Day of  Shia Rights was created in hopes of generating greater awareness of the struggles Shia Muslims around the world currently face. The focus of the 2015 campaign is ending the illegal detainment of the 550 Bahraini minors who were arrested due to involvement in peaceful protests.

Despite Bahrain being a signatory of both the Universal Declaration of Human Rights (UDHR) and the International Covenant on Civil and Political Rights (ICCPR), they have consistently violated numerous articles in both documents. Bahrain has incarcerated, tortured, and even killed numerous underage minors in attempts of subduing peaceful protests and anti-regime gatherings.

At least three Shia Muslims from the Shia Hazara community were shot by anti-Shia terrorists in two separate incidents in the Pakistani city of Quetta Also District Superintendent Police (DSP) Majeed Abbasi was killed when a gunman opened fire at his vehicle in Karachi’s Shah Latif Town. According to witnesses he was shot several times by assailants on motorbikes and died on spotSectarian violence — in particular against Shia Muslims, who make up roughly 25 per cent of Pakistan’s 200 million people — has claimed thousands of lives in the country over the past decade. The worst such attack on the Shia Hazaras took place on January 10, 2013, saw a suicide bomber blow himself up in a small snooker hall, with the overall toll close to 100.

Iraqi forces seized sever bombs placed in cars intending to enter the city of Karbala in Iraq. Cars belonged to individuals pretending to seek shelter and asylum in Karbala due to unrest in the rest of the cities in Iraq.

Officers searched and found bombs inside cars. Karbala and Najaf are two safest cities in Iraq where millions of pilgrims visit every year. Anti-Shia terrorists attempted to exploded number of bombs in these cities but failed.