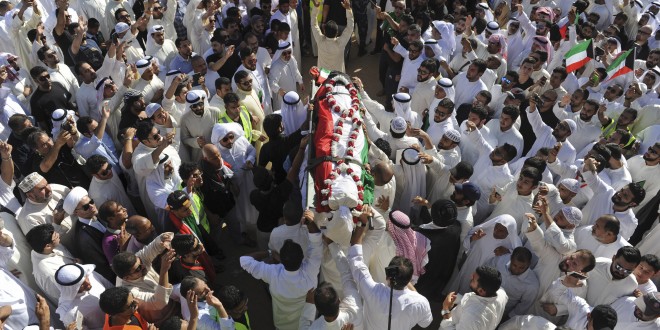 Thousands of Sunnis and Shiites from across the country take part in a mass funeral procession for 27 people killed in a suicide bombing that targeted the Shiite Imam Sadiq Mosque a day earlier, at the Grand Mosque in Kuwait City, Kuwait, Saturday, June 27, 2015. Police in Kuwait said they are interrogating a number of suspects with possible links to the bombing, which was claimed by an affiliate of the Islamic State group. (AP Photo)

Responding to the ISIS Attack in Kuwait

The June 26th bombing at the Imam Sadiq mosque in Kuwait was a horrifying event that devastated the Shia community in the country. Following this attack Shia Rights Watch has worked to contact the Kuwaiti government to request that they work to ensure the protection of religious minorities in their country. Shia Rights Watch sent a letter to the Kuwaiti embassy this week to urge them to both take steps to secure the free worship of Shia Muslims in their country and to speak out against the hate speech in their country and in the region at large that fuels many of the attacks we have seen.

To the same end, Shia Rights Watch sent a letter to the Embassy of Bahrain in the United States. After the attack in Kuwait, ISIS members and suporters said Bahrain was next. This letter urged Bahrain to take proper security measures and to condemn hate speech.

On Saturday June 27th a series of bombs were detonated in Shia areas in Baghdad. These attacks around Iraq’s capital city left 12 dead and dozens more wounded. The first attack was a car bomb that detonated around noon. This attack occurred at a shotp that sells car parts in southeastern Baghdad. Five people were killed and 13 were wounded.

The second attack was a bomb that wad detonated near a vegetable and fruit market in southern Baghdad. In this attack two people were killed and three injured.

On June 30th an Improvised Explosive Device (IED) exploded in the Maidan area of Southern Baghdad. This attack killed one civilian and wounded three others. This attack is part of a chain of attacks by militant groups in Iraq on Shia areas of Baghdad. Shia Rights Watch condemns these attacks as senseless acts of violence that are working to contribute to the intimidation of innocent Shia Muslims around the world.

On Tuesday ISIS militants launching an attack on Shia pilgrims on the Kirkuk-Tuz Khurmatu road in Iraq hit a bus carrying schoolgirls with a rocket. This attack killed a schoolgirl and wounded two others. The Shia pilgrims traveling along this road were heading to the shrine of Imam Hussein for an important anniversary at the time of the attack. This anniversary known as arbayeen marks the end of the 40 day mourning period for the death of the Imam. Shia mark this anniversary by traveling to Najaf, the Kirkuk-Tuz Khurmatu road is a popular route for Shia pilgrims.

On July 1st two militants on a motorcycle gunned down three unarmed Shia men in the Pakistani town of Quetta. The names of the three men  are Nadir Hussain, Asad Ali, and Ali Waris and it is knowm that they are welders from Punjab. It was outside of a shop where they were killed. The assaliants have not yet been identified, but the details about the motive behind the killings has been revealse. When asked about the motivation for the attacks a senior police stated that this attack had been a deliberate targeting of Shia settlers.

On July 6th gunmen from Ahl-e-Sunnat Wal-Jamaat killed three Hazara Shia in Quetta. Like previous attacks, the assailants drove up to the victims on Motorcycles and began to open fire. Three people were killed and two more injured. Pakistani militant groups such as ASWJ have been facilitating a campaign of Shia genocide through targeted killings. Many of Pakistan’s Shia intellectual community have been targets of this violence. Doctors, Lawyers, and Businessmen are routinely the focus of such violence in Pakistan. Shia Rights Watch condemns this violence and calls on the Pakistani government to investigate these crimes so that these gunmen do not remain anonymous but are captured by security forces and brought to trial.

This week the United States has decided to resume security aid to the Kingdom of Bahrain. The aid that is being restored has been suspended since 2011 after brutal crackdowns on peaceful protestors. This decision by the U.S. government is problematic because Bahrain has shown little to no improvment in its treatment of the Shia majority. A video retrieved by Shia Rights Watch at the end of last year shows the aftermath of an attack on a Shia mosque by Bahraini security forces which involved the usage of teargas in enslosed areas. The video shows mosque visitors coughing and crying as they try to exit the mosque. Shia Rights Watch has written a letter to Secretary of State John Kerry to urge him to reconsider this decision in light of the continuing human righhts violations that the security forces commit.

This week, Baqer Darwish who is with the Bahrain Forum form Human Rights (BFHR) revealed widespread employment discrimination in Bahrain’s legal system. Darwish noted that most of the judicial hires are people from the royal family. Members of the Shia majority only hold about 3% of the jobs in the judicial system.

Shia Rights Watch realizes that this statistic is emblematic of a larger system of oppression that is currently present in Bahrain. The non-inclusive government of Bahrain has used its status to oppress its citizens. Bahraini Shia, who have stood up to protest this government have been met with repeated crackdowns in the form of arbitrary arrests, beatings, and torture. Currently over 550 children are being detained in Bahraini prisons. To put a halt to the mistreatment of Shia Muslims in Bahrain, Shia Rights Watch has continued to hold international campaigns in support of the protection of the rights of Shia. It is of vital importance that the Bahraini government work to restore trust between Shia civilians and their government, especially their security forces.