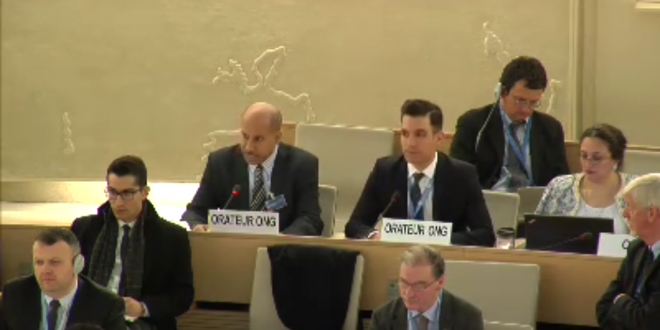 The Shia Predicament in the GCC.

On March 9, 2015 Shia Rights Watch’s Saudi Arabia expert participated in an item 3 Interactive Dialogue on Freedom of Religion or Belief, addressing the GCC discrimination toward Shia Muslims at 31st session of the United Nation Human Rights Council in Geneva.

Shia Muslims in the GCC states of Saudi Arabia, Kuwait, Bahrain, UAE & Qatar are facing a crisis that threatens their existence. Gulf Shia’s have been the main target of GCC governments and ISIS terrorists alike. Over 350 Shia’s have been killed in mosque bombings in Saudi and Kuwait, and by Saudi and Bahraini police,  death squads, and executions.

Gulf governments have marginalized Shia’s for generations, and built economic, educational, cultural and political barriers before them. Shia majority in Bahrain is treated in similar fashion, to how South African Apartheid treated the black majority.

The Saudi government bans the building of Shia mosques in Riyadh, and seeks to execute 30 Shia professionals for planning a Shia gathering in Makkah. GCC governments restricts Shia access to senior government positions, such as diplomats, ministers, judges, security officers, and religious officials. There is no Shia mayor in Saudi Arabia. Shia women suffer even more.

As if they were invisible, Gulf governments ban Shia from expressing their faith and culture on state and private media, and bans the teaching of Shia Islam at any educational institution. Saudi school textbooks cast Shia’s as enemies of Islam, as polytheists, and Jewish manifestations. Anti-Shia xenophobia and sectarian incitements –precursors of violence– are often repeated by Gulf officials without repercussions.

Saud Bin Naif, governor of the Eastern Province said this about Shia Arabs, “the offspring of Abdullah Ibn Sabba, the Jew, the Safavids who come out with their ugly faces.” The Saudi government runs the sectarian TV network Wesal, which operates from Riyadh and incite violence and hatred against Shia.

Dubai police Chief Dhahi Khalfan called for the forced conversion of Gulf Shia’s to Sunnism. Qatari government-backed Sheikh Yousef AlQardawi, frequently incite hatred and xenophobia against Shia. The same is true for AlJazeera Arabic. We hope your council appoint a special rapporteur to address the conditions of the Shia Muslim communities in the Gulf, as part of religious freedom and xenophobia; and to ensure an end to incitement, violence, and marginalization.