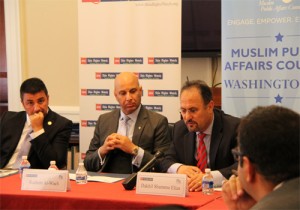 Shia Rights Watch and Muslim Public Affairs Council successfully had their briefing on ISIS and its threat on the Capitol Hill on Monday the 29th.

The briefing focused on U.S policy to degrade and defeat ISIS including the recent airstrikes in Syria. Also the panelist addressed the issue of Americans and Europeans traveling aboard to join ISIS. The second panel focused on the testimonials from three different targeted populations in Iraq. Representatives from Shia Muslims, Iraqi Ezidis and Christians had an opportunity to share their experience and pain with audience.

Jomana Qaddour addressed the improvements of ISIS in Syria, 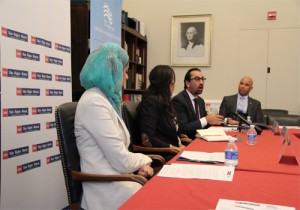 Martin Manna, representative of Iraqi Chaldean community talked about displacement of Christian population in Iraq, and

Kadhim Al-Waeli, the representative of Iraqi Shia explained Shia targeted killings and human rights violations by ISIS in this country.

For both Christian and Ezidi leaders it was the first time that two Muslim NGOs have invited them to express their pain along with others. SRW believes all minorities and impacted communities must come together in order to defeat extremists. This organization is thank full to MPAC for their co-sponsorship and hopes to see more NGOs join the coalitions against terrorists.