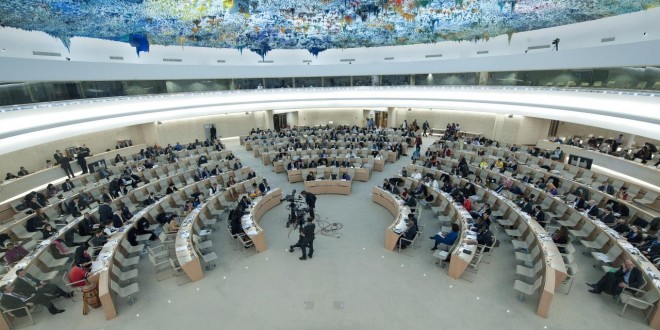 A wide view of the Human Rights Council. Photo by Jean-Marc Ferré

Following is a summary of the report:

Mosques, Shrines, and various other sites of religious, historic, and cultural importance in Saudi Arabia have been allegedly destroyed in order to promote a Wahhabi interpretation of Islam in which visitation of the holy sites is prohibited. Saudi Arabia is home to Islam’s two holiest sites; Mecca and Medina.

In fact, it is estimated that over 90% of Saudi Arabia’s historical and archeological heritage has already been destroyed, and that more is planned by the government. The mosques being destroyed includes ones visited by the prophet Muhammad himself and, since 2014, there have been talks to destroy the mosque where the prophet’s body is buried and to move him to an anonymous location at Al-Baqi cemetery. The government has also destroyed the remains of his close friends and family in order to prevent people from seeking out these holy sites.

The government has destroyed many buildings of religious and historical significance under the guise of expansion of the grand mosque; this included tearing down an ancient library in order to add toilets for visitors.

In 2012, the government even demolished the first place the prophet ever taught Islam.

Thousands of years of history have been covered up by hotels, parking lots, and other modern amenities. By January 2015 the Ministry of Islamic Affairs and Endowments set 10,000 pieces of property up for demolition.

In order to trivialize their historic or religious significance, many signs were posted stating the places may not have been actually important and that certain prayer was banned in these locations.  The government claimed that destroying such religious things actually helps religiously because it prevents idol worship; a religious sin in their eyes.

A response has been requested within 60 days in which the full threat is laid out, how if effects certain Islamic religious groups and targets them, how potential people affected have been consulted concerning these demolitions, etc.