Terrorists are back in Karbala 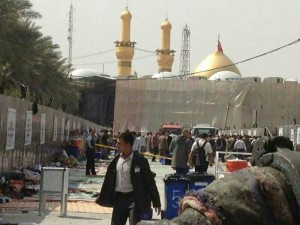 On March 3 a suicide bomber killed and wounded pilgrims commuting between two most important Shia shrines in Karbala. According to the authorities, an engineer working on the expansion project of the shrines blew himself out on Sunday march the 3rd.

The shrines for the two grandsons of the Prophet Muhammad are among the holiest sites in Shia-Islam, and they are visited by hundreds of thousands of pilgrims from Iraq and abroad each year. Anti-Shia militants frequently target Iraq’s Shia majority in a bid to increase sectarian tension and undermine the country’s Shia-led government.
Meanwhile, three separate attacks in Shia-dominated areas on Sunday in central Iraq have killed at least four people and wounded 14, officials said.
The deadliest was in the Husseiniya area northeast of Baghdad, where three roadside bombs went off simultaneously, killing three civilians and wounding 11 others.