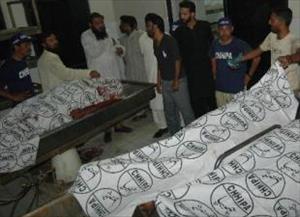 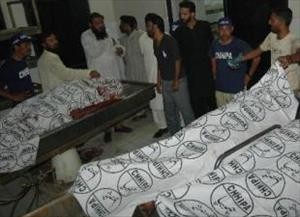 Two Shia Muslims were martyred in Karachi in the separate incidents of target killing on Saturday by the terrorists of Nasabi-Wahabi outfits.

A member of Pak Hyderi Scouts Open Group, Aoun Mohammad was gunned down by the armed terrorists of Nasabi-Wahabi terrorists organization of Sipah-e-Sahaba and Laskhar-e-Jhangvi in Organi Town area Karachi.

Member of the largest Shiite Scout group of Karachi, Aoun Mohammad has received three bullets on his body and was shifted at the local hospital in Karachi but later he got martyred. His body was shifted at Rizvia Mosque Nazimabad for his funeral.

However, In another incident President of PIA Peoples Unity, a sister organization of Pakistan Peoples Party, Aamir Shah son of Safdar Shah, was gunned down by the terrorists at Gulistan-e-Johar area, when he was along with his companion on their way when their car was targeted by unknown gunmen in the area of Gulistan-e-Jauhar.

Aamir Shah was also a chairman of PIA’s People’s Unity.

The target killing of Shia Muslims have been continued in Karachi from the last three decades but the Government and law enforcement agencies have failed to arrest the terrorists and their masterminds involved in the genocide of Shia Muslims in Karachi and Pakistan.

The district west of Karachi consisting on Orangi Town, Qasba Colony, Raees Amrohi Colony, Mangopir and others areas were becomes the safe haven of the Al-Qaeeda linked Taliban terrorists and they were involved in the killing of Shia and Beralvi Muslims and attacked on National installations.

This is the need of hour that the Government of Pakistan and Law Enforcement Agencies of the Country should take stern action against the anti-state elements to restore the peace of the country.