Home / Publications / Monthly Analysis / When It Will End February 2015 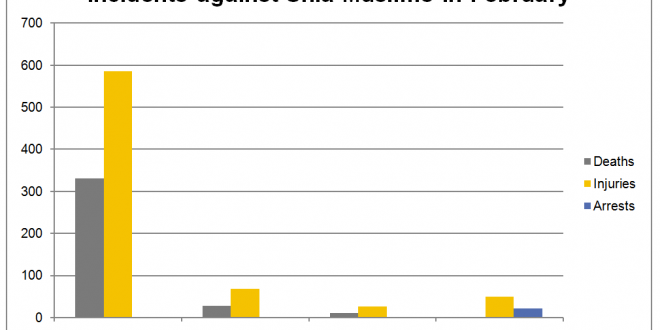 When It Will End February 2015

The second monthly anti-Shi’ism report by Shia Rights Watch continues where the previous report left off. There were more than 350 deaths and over 700 injuries this month. This month has also witnessed the first incident of violence against Shia in Central Asia this year with the kidnapping of 30 Afghan Shia. Anti-Shiism remains an urgent issue that needs to be addressed by the international community.

This report will analyze the data compiled on Shia deaths, injuries, and arrests that occurred between February 1st and February 28th. The data for this report was gathered from a variety of different sources. The most well-known incidents of anti-Shiism were retrieved from US News and ABC but lesser known incident were retrieved from the Iraq body count in addition to stories that are reported to Shia Rights Watch by eyewitnesses. Each incident is thoroughly evaluated for both authenticity and relevance. For an incident to be included in this report it has to show a clear intent to target Shia Muslims on the basis of their religious beliefs. The subsequent sections will present and analyze the data gathered by Shia Rights Watch for February.

February saw Shia Muslims targeted in five countries: Bahrain, Pakistan, Iraq, Syria, and Afghanistan. The incidents included in this report are murders, injuries, and arrests. In total there have been 370 deaths, 731 injuries, and 21 arrests. Although this data primarily focuses on the aforementioned categories, incidents such as the revocation of citizenship in Bahrain and the kidnapping of Shia in Afghanistan will be mentioned in this report.

The bulk of violent incidents have occurred in Iraq, which has witnessed dozens of bombings in Shia populated areas. Along with the deaths, the bulk of the injuries during February occurred in Iraq. All of the arrests that have occurred were in Bahrain. This section is roughly similar to this portion of last month’s report which shows that there has not been much change in the situation of Shia around the world. The next section of this report will present and analyze the data compiled on anti-Shiism. 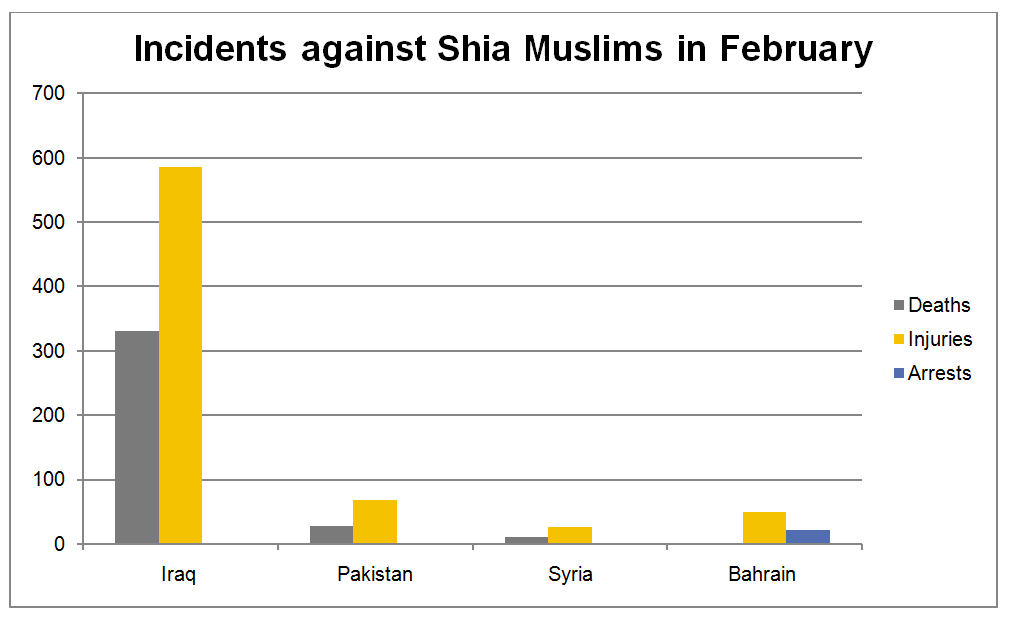 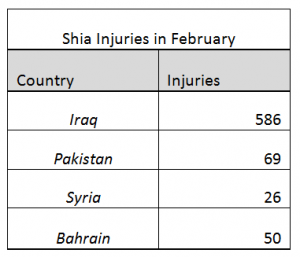 Violence against Shia Muslims in Iraq in February largely came at the hands of non-state actors such as ISIS. The violence against Shia have largely come in the form of bombings and mortar fire that has targeted Shia neighborhoods. A total of 331 Shia Muslims were killed in Iraq this month and an additional 586 injured. The number of deaths is a significant decrease from the 438 deaths that occurred last year, but injuries have increased from 235 to 586. While the decrease in deaths is a step in the right direction, the number of injured in Iraq shows that Shia in the country are being targeted at a similar, if not higher rate.

Violence against Shia in Pakistan has declined in both the deaths and injuries columns. The number of deaths in Pakistan declined from 91 in January to 28 in February, and the number of injuries declined from 66 in January to 49 in February. This can be attributed in part to heightened security at mosques. Suicide bombers were subdued before detonating their vests in at least three incidents this month.

One of the more violent incidents occurred when four militants connected with the Pakistani Taliban (TTP) attacked a Shia Mosque in Peshawar. The militants, strapped with suicide vests, scaled the walls surrounding the mosque and began shooting at worshippers and lobbing grenades before detonating themselves. Three of the four worshippers detonated their suicide vests and the fourth militant was stopped by worshippers in the mosque before he could detonate.

In the wake of the terrorist attacks in January, the international and local communities have denounced the violence against Shias in Pakistan. There have been many reports of human chains made up of Sunni, Shia, Hindi, and more guarding Shia mosques and condemning the violence. We feel that the international and community support has had a large effect on the decrease in anti-Shia violence in Pakistan this month. 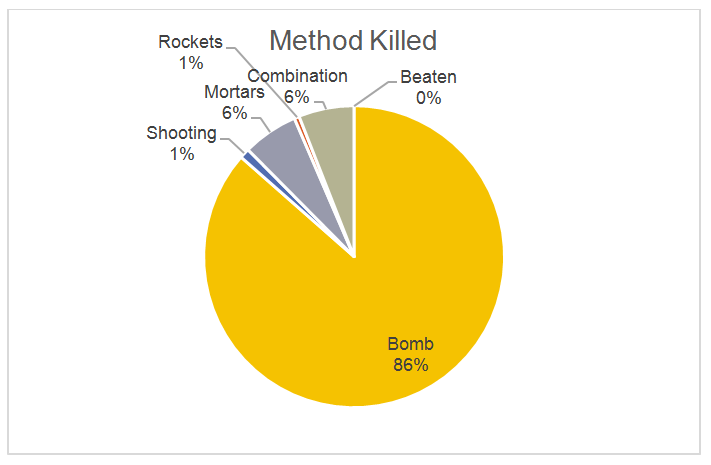 February 14th was the fourth anniversary of the uprisings in Bahrain. To commemorate the events of 2011, Bahraini Shia staged a three-day protest. The protests occurred in the largely Shia neighborhoods on the outskirts of Manama. The Bahraini security forces cracked down on these protest through tear gas, pellet guns, and arrests. Over the three day protest period, roughly 48 Shia were wounded and 20 arrested. Bahrain accounts for all of the arrests of Shia in February and most of the arrests come from that period. Violence against Shia in Bahrain comes largely from the government while the violence in other countries comes at the hands of militant groups. In addition to the events surrounding February 14th, the Bahraini government continues to imprison renowned opposition leaders and revoke the citizenship of scores of Bahraini Shia.

Although Afghanistan is not included on any of the charts it did witness a horrific event when 30 Hazara Shia were abducted while on a pilgrimage in the Zabul province. The bus was travelling on a road between Herat and Kabul when gunmen stopped the bus and ordered everyone off. The gunmen made the passengers produce documents showing that they belonged to the Hazara minority and then proceeded to release the women and children while taking the men. The fate of the Hazara men remains unknown upon the release of this report. Hazaras have been the victims of intense violence in Pakistan, especially in the town of Quetta, but this abduction reveals the possibility of an increase of anti-Shiism in Central Asia. 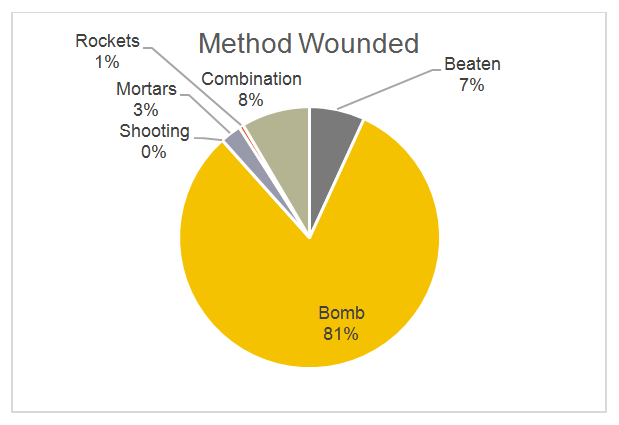 It would appear that the amount of deaths from bombings increased dramatically by glancing at the pie charts comparing the method of death from January to February. In reality the amount of deaths caused by other methods has decreased dramatically for February. The total amount of deaths from bombings remained about the same (294 Jan vs. 320 Feb), but the amount of people wounded from bombings increased more than twice what it was in the previous month (257 Jan vs. 596 Feb). Attacks that utilize a combination of weapons and mortars are still the second and third most killers as well as wounded. However, the injuries caused by these methods pale in comparison to the damage inflicted by bombs.

The violence faced by Shia in the month of February shows that anti-Shiism is not receding as the year progresses. Iraq and Pakistan remain the deadliest places for Shia in the world as they account for the vast majority of the deaths. Bahrain is where the majority of government based violations occur, with their large number of arrests and citizenship revocations. Lastly, the kidnappings in Afghanistan may signal a rise in anti-Shiism in Central Asia. The protection of Shia populations needs to be a priority for each of these countries. The murder of hundreds of innocent civilians should not be become so commonplace that it receives scant attention in the news.