Since the beginning of 2015, Shia Rights Watch has collected data on incidences of anti-shi’ism around the world. By our records and reports there have been a total of 2,959 Shia killed and 3,662 wounded in various bombings, attacks, and shootings in the seven months beginning January 1st and going until the end of July. Additional incidences of mosques being vandalized or demolished, citizenships being revoked, hate speeches, employment discriminati
on, and abductions have also been reported.

Of these events, various parties have declared responsibility for attacks that have claimed a total of 1,209 lives and left 1,281 wounded. Governments, as well as terror groups, have been responsible for many attacks and were named as responsible parties in instances of citizenship removal, illegal incarcerations, and violent suppression of peaceful attacks.

The Islamic State of Iraq and Syria (ISIS) has claimed thirty of the attacks that have occurred this year and are responsible for over  1,016 of the deaths recorded to date.

The group has claimed two of the largest attacks of 2015: the March 20th mosque attacks in Sana’a Yemen which resulted in 142 deaths with 350 wounded, and the July 18 bombing of Ramadan celebrations in Diyala, Iraq which resulted in the death of 120 men, women, and children, leaving 130 more wounded. The terrorist group also claimed responsibility for the Kuwait suicide bombings that took place at a Shia mosque as worshippers were gathered for prayer. This attack left 27 dead and 227 wounded. Moreover, on May 28th a mass grave was discovered in territory former controlled by ISIS. Over 470, mostly Shia, bodies were discovered.

More recently, there have been five bombings in late July that many officials are attributing to ISIS, although nobody from the organization has released a statement confirming their involvement yet. Between July 10 and July 25 there were 4 bombing attacks in Shia neighborhoods in Iraq, as well as a suicide bombing at a crowded swimming pool in Northern Iraq that targeted the Shia Turkmen minority. Combined these attacks left 81 dead and 180 wounded. The method and location of attacks is consistent with previous ISIS attacks and due to the recentness of the events it is too early to rule out ISIS involvement.

In recent months it has become clear that ISIS is one of the primary sources of chaos in the region. However, the Taliban is still very active in Pakistan and Afghanistan. Since January 1st the terrorist group has claimed six attacks. The January 9th attack on a mosque in Rawalpindi resulted in 7 deaths followed by the February 13th attack in Peshwar that left 19 dead and 60 wounded. On June 10th the group abducted nine Shia in Damarda Afghanistan and forty-five days later on July 25th they kidnapped eighteen more Hazara Shia from Baghlan Afghanistan. Since the second abduction five victims have been released and negotiators are still working to get the rest home safely. While these attacks are heinous in nature the worst of the Taliban attacks occurred on June 20th as they beheaded six Shia Hazaras in Ajristan, Afghanistan. The New York Times suggests that in light of the growing media attention on ISIS’s attacks, the Taliban is plotting equally shocking attacks in order to gain recognition and media coverage as well.

While incidences of hate speech, discrimination, and forced denouncement of faith have been reported against the Egyptian, Indonesian, Nigerian, Saudi Arabian, and Pakistani governments, the Kingdom of Bahrain is by far the government currently carrying out the most attacks against Shia. 153 Shia protestors have been arrests including Sheikh Ali Salman who was arrested June 16 for tweeting about regime change, opposition leader Majeed Milad who was arrested July 2, and prominent opposition member Ibrahim Sharif who was arrested July 12. By March 11th there had been 155 recorded instances of mistreated Shia detainees in government custody – a number we expect to have increased since. These arrests all come after the 15 October 2014 death sentence of Shia Sheikh Nimr in Saudi Arabia, whose appeal was denied by Saudi Arabia authorities on March of 2015.

Moreover, The Bahraini government has stripped 72 people of their right to citizenship, 50 of which were confirmed members of the opposition.  Security forces have used violence to suppress at least three large protests resulting in one child being injured due to tear gas exposure as well as a thirteen year old boy being shot in the face by regime forces. Numerous home raids have occurred without cause and upwards of 46 Shia have been beaten. Prominent Bahraini Cleric Jalal al-Sharqi made a public statement on May 12th that denounced Shi’ism by accusing Shias of not believing in Allah and calling them Jewish and underserving of mercy. 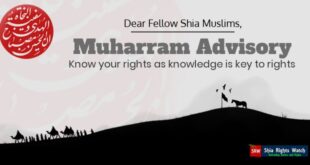