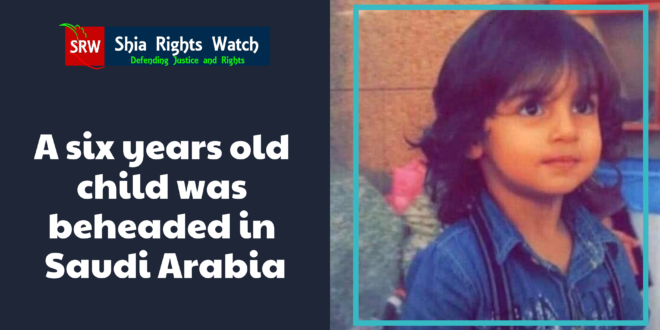 A six years old child was beheaded in Saudi Arabia

In an unprecedented incident, a six year old boy, now recognized as Zakaria al-Jaber was beheaded in front of his mother after he was confirmed to be Shia.

The mother and son took a cab to visit the shrine of Prophet Muhammad in Medina. While on the Sultan Abdel Aziz highway, mother of six-year-old invoked blessings {salawat} on Muhammad (S), by stating {“O Allah! Bless Muhammad and the progeny of Muhammad”}. The blessing was stated in a syntax specifically used by Shia Muslims.

The driver asked the mother if they are Shia Muslims. She responded yes.

Sources within the family report the child had asked for something to eat. The mother asked the driver to stop by a store to purchase some snack for the child.

Upon stopping the car, the driver pulled the child away from his mother and attacked him with a broken piece of glass.  Witnesses report the child was beheaded from the back of his head as his mother watched and screamed.

There was no intervention by viewers at the time of the incident.  No response from authorities has been announced thus far.

The Saudi Shia community came together today in mourning and to show solidarity with the parents of Zakaria. The community reported this incident is a result of ongoing violations and lack of protection by the Saudi authority for its Shia population.

Saudi Shia have been under a military crackdown by their government and many Shia activists are in prisons and on death roll.

Shia Rights Watch, among other NGO’s have long advocated for the rights of this minority through national and international campaigns at the United Nations. However, the population still suffers because of the lack of international commitment to end such violations.

Beheading of a young child in such manner must be addressed immediately, says Director of Shia Rights Watch, Mustafa Akhwand.