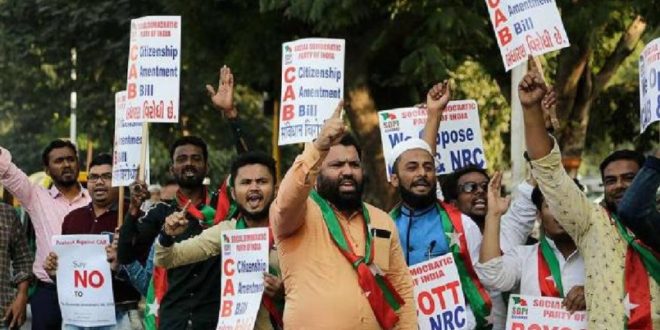 On Wednesday, December 11, 2019, Indian lawmakers approved an amendment to the nation’s Citizenship Law which, as claimed by proponents, grants dignity and equal opportunity for those facing religious prosecutions in neighboring nations. Through the new legislation, illegal migrants who have lived in India for five years can apply for citizenship. The adopted changes ease immigration for thousands of migrants and for the first time in Indian history, create a provision for religious identity to serve as a basis for granting citizenship.

While the bill sounds hopeful, its contents are far from inclusive. Opponents note that using religious identity undermines Article 14 of the National Constitution which highlights the Right to Equality regardless of identity. India has a long history of secularism, but the bill along with recent State-sponsored speech signal a bleak future for India.

The new law endangers religious tolerance and can promote violence against minority groups within the nation.

Despite the bills aim to establish India as a refuge against religious prosecution, the bill raises concerns about discrimination within the nation against Muslim residents. The bill specifically eases naturalization for Hindu, Sikh, Buddhist, Jain, Parsi, and Christian individuals from Pakistan, Bangladesh, and Afghanistan, while ignoring the multitude of other minority religions and identities.

The contents of the amendment counter its aims through the direct exclusion of certain religious groups, namely Muslims, and indirectly by signaling intolerance towards Islam and its followers.

India is home to 200 million native Muslims and millions of Muslim migrants who have thus far played an active role in promoting diversity in the nation. However, in recent years, anti-Muslim rhetoric sponsored by the State has flooded the nation. Moreover, the lack of justice and anti-violence enforcement by the government encourages targeted attacks.

In 2016 alone, 86 individuals were killed and 2321 people were killed as a result of 700 incidents of communal violence.

The bill advances allegations of demographic shifts enforced by the government. In November of this year, Amit Shah, the Minister of Home Affairs called for the expansion of the National Register of Citizens, an initiative to identify citizens and migrants, across India. The program serves as a part of Shah’s endeavor of removing what he calls, “termites” and “infiltrators,” from the country. In Assam, the initial cite of the program, sources report the exclusion of over 2 million citizens from the list- a large proportion of which were Muslim nationals. Many fear that exclusion from the census makes it harder for Muslims to prove their citizenship under the threat of deportation. The targeted displacement of Muslims paired with increased nationalization of non-Muslim migrants signals the architecture of India with a decreased Muslim population.

As it pertains to Shia Muslims, the bill has dangerous implications. Already a targeted group, the new bill excludes Shia groups such as the Hazara from Pakistan, Bangladesh, and Afghanistan- all countries included in the bill. Exclusions of the Shia from the bill is a vehement display of biased policy as these groups have been established as endangered minorities in their native nations. As for Shia native to India, many may be expelled to nations in which their lives are targeted by active anti-Shiism. The bill further limits Shia Muslims fleeing prosecution, especially as it sets precedents in the region to explicitly limit migration based on religious identity.

The 2019 Amendment to the Citizenship Law is a violation of the Indian Constitution, a document that has protected secularism in the nation for decades. Not only is the bill itself discriminatory against individuals outside of Hinduism, Sikhism, Buddhism, Jainism, Parsism, and Christianity, but it signals the acceptability of intolerance and prejudice.

Shia Rights Watch calls for reconsideration in the content of the bill such that it is inclusive to any group that is at risk in the region as defined by the international community. Moreover, India is a multi-cultural and multi-religious nation and it must be noted that there exist minority religious groups under attack within the country. Efforts at the legislative level of society must be made to promote peaceful coexistence and justice for those who are violently targeted based on their religious identity within India.