Shia Rights Watch continues to monitor human rights violations against Shia Muslims in the month of April. In total, an approximate 40 incidents of violence took the lives of 77 Shia Muslims and injured 41 others in the nations of Afghanistan, Bahrain, Saudi Arabia, and Iraq.

It is important to note the reported incidents provided limited but necessary insight into conditions of this religious minority.

Ten incidents of violence left more than 70 Shia Muslims dead and 25 others wounded across Afghanistan. Attacks took the forms of roadside bombs targeting travelers, explosions in areas dense with Shia Individuals, and armed attacks by assailants. In a heinous incident of violence on April 26, armed assailants led a  mass execution, killing seven members of a family, one of whom was a child. 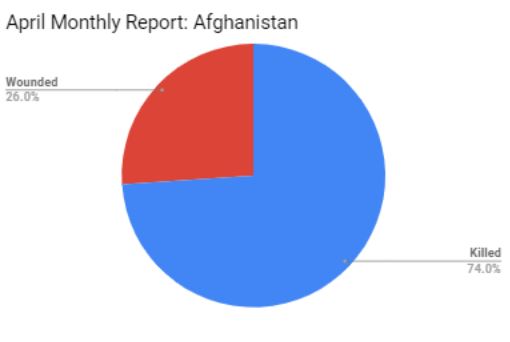 Shia Muslims in Afghanistan are disproportionately targeted by extremist groups. As the largest minority group in the nation, Shia Muslims live in the nation with the awareness that their beliefs and practices put them at increased risks of terrorist attacks.

In the month of April, Shia in Bahrain were subject to human rights violations in the forms of baseless detainment, torture, and denial of treatment.

On April 6th, detainee Sheikh Zuhair Ashour was denied treatment for deteriorating health in Jaws Prison. Later on the 15th, sources report the denial of treatment to Ahmed Issa Ghanem – prison authorities refused to provide him with medication he was prescribed.

In addition to denial of treatment, prisoners report heinous torture. Late in the month, the family of Ali al-Ghanmi, a military detainee, reported al-Ghanmi being tortured by a Bahraini officer and a Pakistani mercenary.

In total, six arrests were reported to Shia Rights Watch.  One of those was Ahmed Yousef Abdel Aziz, after being summoned in al-Malikiyah.

In the month of April, two Bahraini citizens, hajj Abdul Aziz Muhammad Ali Sahwan and Hajj Abdul Nabi Abdullah Abdul Nabi,  died as the result of their prolonged stay in Iran, enforced by the government’s refusal to extradite Shia pilgrims.

While other nations provide services to citizens to combat COVID-19, military forces in Saudi Arabia raid Shia towns. On the 11th of April, military forces raided the town of Awamiya, firing live ammunition in the air and towards the infrastructure. While no injuries or deaths were reported, the raid achieved its goal of intimidating the residents of Awamiya.

The town of Awamiya is one of the most Shia populated areas of the country and home to the most violent reproaches in the hands of the Saudi military.

Violence does not end with the loss of life. On the 17th of April, authorities bulldozed the graves in Awamiya, damaging historical infrastructure and monuments to those deceased.

In the month of April, approximately 20 incidents, resulting in the death and injury of over 25 individuals across Iraq. It must be noted that the incidents noted here are those reported to Shia Rights Watch by citizens and residents. Many cases of violence are not reported due to fear of retaliation and in some cases lack of communication resources.

Diyala was a hot spot for violence in the month of April. Explosive devices, car bombs, mortar shells, and gunfire were predominant forms of violence. In a number of incidents, ISIS assailants claimed responsibility for lives lost exemplifying the organization’s activeness in the country despite efforts of the government.