Shia Rights Watch presents a monthly analysis of the trends of Anti-Shiism, as reported by activists and survivors. Anti-Shiism, direct and indirect, crosses international borders. Shia Muslims all over the world face unique hardships based on their religious identity.

In June, Shia Muslims in the countries of Azerbaijan, Bahrain, Iraq, Nigeria, and Pakistan reported Anti-Shiism. The nature of violence is unique to each state and chronicled below.

Moreover, this report highlights several happenings in the pursuit of justice, including but not limited to the release of Nabeel Rajab in Bahrain, reparations for wrongful brutality in Nigeria, and the discovery of a mass grave in Iraq. 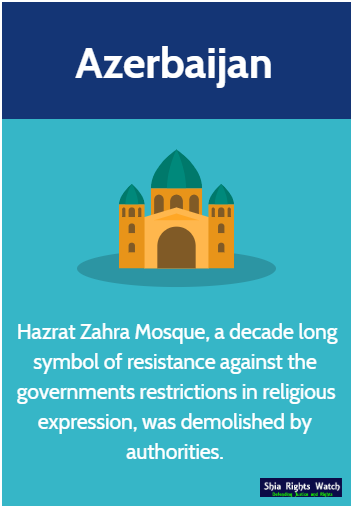 attempt was made in 2008. However, with the steadfast demonstration of activists, the demolition was postponed. Since then, many of the activists have been detained by the Republic.

Natives report that the mosque was a symbol of resistance against anti-religion policies. With the recent successful demolition, the government signaled an ongoing country-wide offensive against religious expression.

Early in June, activist Nabeel Rajab was released under the Alternative Penal Code. In a statement, his family announced, “God blessed us today with the release of our dear brother Nabeel Rajab from prison, under the umbrella of the alternative penal code, where he will serve the remaining three years of his sentence in an alternative sentence defined by legal controls.”

A prominent human rights activist and an active influencer of the 2011 protests, Nabeel was arrested and sentenced to a five-year term in 2018. 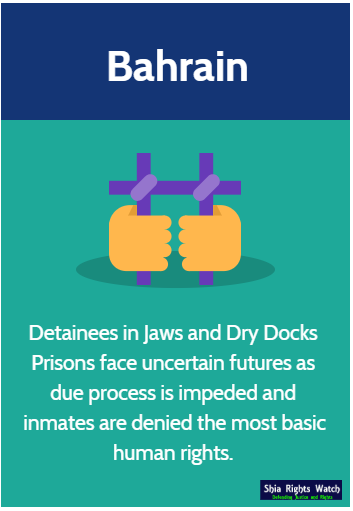 In June, 22 incidents of Anti-Shiism were reported to Shia Rights Watch. Violations against detainees and deprivation of fundamental rights made up a significant portion of reported cases of anti-Shiism.

Much of the limitations were in correspondence with days of religious significance. Prison officials tried to prevent religious expression and thwarted proclamations of faith.

Shia detainees in Jaws Prison and Dry Docks Prison face uncertain futures. Many are left with debilitating conditions and no medical attention. The family of 17-year-old Sayed Ahmed Sayed Majeed Mahdi Fadhl report denial of treatment. His mother stated, “How can we bear this and be reassured about our children’s [conditions], as they have been deprived of living among their families, of freedom and education?! Is there someone that understands their suffering and our suffering due to separation from our children?'”

Fadhl was arrested three years ago and sentenced to 10 years and six months. He is currently serving time in the juvenile section of Dry Dock Prison.

Late in the month,  a mass grave was unearthed in the village of Humeydat, west of Mosul. While the exact number of bodies remains to be identified, officials suspect victims to be that of the 600 Shia individuals taken from the local Badoush Prison in 2014. According to witnesses, Daesh assailants rounded up 1,500 inmates and separated the Shia Muslims, killing and burying them, while setting the non-Shia free. 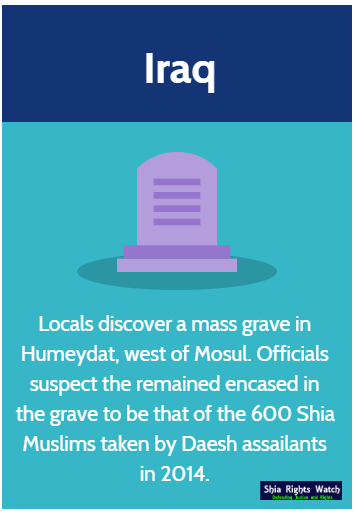 The investigation into the mass grave has been slow and limited by the plague of Coronavirus in the country.

Apart from the mass grave, 24 incidents of anti-Shiism have been reported to Shia Rights Watch.

Violence is prominent in northern cities of the country and takes the form of explosive devices, mortar shells, and targeted shootings. Local authorities have expressed concern that the reduction of available forces due to Coronavirus containment efforts across the country may allow for increased violence by Daesh assailants. None-the-less attempts to identify and disassemble terror organization cells across the country continue. 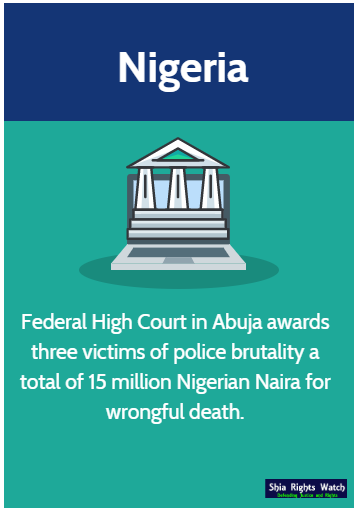 The Federal High Court in Abuja awarded a total of 15 million Nigerian Naira to three members of the Islamic Movement of Nigeria over wrongful death. Justice Taiwo Taiwo ordered the National Hospital to release the bodies of Suleiman Shehu, Mahdi Musa, and Bilyaminu Abubakar Faska and their families to be paid 5 million Nigerian Naira each. Shehu, Musa, and Faska were among four killed by police on July 22, 2019. The body of Askari Hassan, the fourth in the case, is kept in Asokoro District Hospital.

The case brought forth also asked for an official and formal public apology in the media; the judge did not grant the request.

Intolerance against religious minorities, specifically those who follow the Shia faith, stood as a barrier to public health efforts. 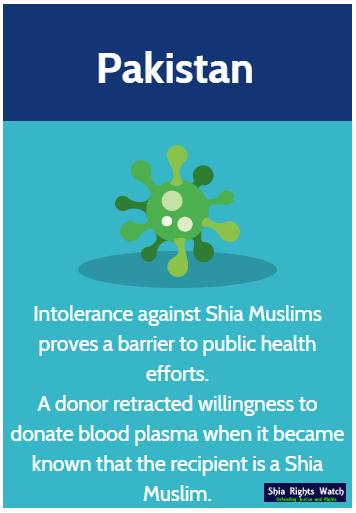 Anzala Zahra Kazmi reported first-hand that a donor sought to give blood plasma for a COVID-19 positive individual, retracted willingness to give plasma once he became aware the recipient was a Shia Muslim.

Early in the month, a minor was killed after his identity as a Shia Muslim was revealed. The assailant is yet to be apprehended.