Massacres and Maltreatment: Incidents of AntiShiism in May 2015

Incidents of Anti-Shiism in May 2015 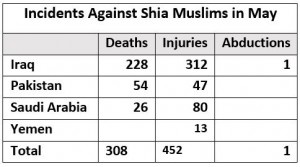 There has been a decrease in both the number of Shia killed during attacks and those that were arrested or abducted. The amount of Shia injured as a result of incidents has increased from last month, but still continues on a downward trend. There were over 300 deaths and more than 450 injuries this month. These figures result in an average of almost 11 deaths per day, and nearly 16 injured Shia every day. Violence against Shia is more focused on a handful of countries this month, and is now confirmed as present in Somalia in 2015. Anti-Shiism is a growing trend that will continue to gain notoriety until the international community addresses the issue.

This report will analyze the data compiled on Shia deaths, injuries, and arrests that occurred between May 1st and May 29th. The data for this report was gathered from a variety of different sources. The most well-known incidents of anti-Shiism were retrieved from stories that are reported to Shia Rights Watch by eyewitnesses. Each incident is thoroughly evaluated for both authenticity and relevance. For an incident to be included in this report it has to show clear intent to target Shia Muslims on the basis of religious beliefs. The subsequent sections will present and analyze the data gathered by Shia Rights Watch for March.

April saw Shia Muslims targeted in 7 different countries: Iraq, Pakistan, Saudi Arabia, Yemen, Nigeria, Bahrain, and Somalia. It is possible that Shias from other countries were targeted when they went to Iraq to visit the holy shrine of Musa Kadhim, but there has been no explicit reporting of such. In total there were 308 deaths, 452 injuries, and one abduction that we are aware of.

The violence against Shia Muslims in Iraq continues to be the actions of non-state actors persecuting Shia for their beliefs. This month there were Shia pilgrims from around the world visiting the shrine of Imam Musa Kadhim, and this shrine is located in the Northwestern part of Baghdad. In previous reports, Baghdad was the center of violence in an effort from Daesh to distract the security and coalition forces so they could maintain their control of the Anbar Province. However, this month the Shia pilgrims were the targets, and Iraq deployed a massive force to protect the pilgrims. It is unclear whether the increased security forces or the defeat of Daesh around Iraq is responsible for this having the lowest violence figures so far this year.

The deaths and injuries against Shia in Iraq result from bombings, shootings, mortar shells, and a combination of the three. There were at least 228 deaths and 312 injuries in Iraq this month as a direct product of the Shia Genocide. The number of deaths in Iraq is a decrease from 298 of the previous month, and the injuries decreased negligibly from 307 to 305. More mass graves were uncovered in Tikrit, and the number of deceased was around 470 people. Most of those executed were Shia, but all were killed by Daesh when they held the city. There was also one kidnapping in Iraq, and unfortunately the Shia person from Basra was subsequently killed.

There were seven incidents of anti-Shiism in Pakistan this month that we are aware of, and they both occurred throughout the month. The attackers continue to use either bombs or guns to carry out their plots, and bombs lead both the casualty figures. There were at least 54 Shia deaths and 47 injuries in Pakistan this month. As was foreseeable from the last report, it appears that the shock of the deadly attacks on school children may have worn off as anti-Shiism seems to be making a resurgence in Pakistan. However, the government has taken a stand on hate speech by sentencing a man to five years in jail for referring to Shia as infidels when he was leading prayer.

All eyes were on Saudi Arabia this month as a Daesh suicide bomber detonated in a Shia mosques in Qatif and Dammam. 25 Shias were killed from this incident, and anywhere from 80 to 100 more were injured. There were protests from the Shia community around the world that claim this attack happened because the Saudi government does not want to protect Shias. It could have been a deliberate failure of intelligence or just an accidental lapse in it. However, the King of Saudi Arabia has declared that those who carried out the attack and their sympathizers will be destroyed. Whether the claim is substantive or not will have to be seen. Saudi Arabia plans to execute political prisoner Sheikh Nimr al-Nimr, but there are global appeals to prevent the execution. Shia Rights Watch urges the Saudi Arabian government to halt the execution, and release political prisoners who merely ask for democracy. 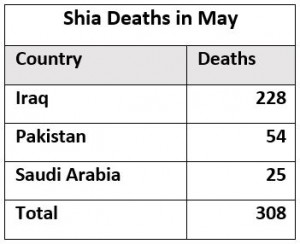 On the same day that all were distracted in Saudi Arabia, Daesh launched another bombing on a Shia mosque in Yemen. It could have ended more like the incident in Saudi Arabia, or even like the previous mosque bombings in Yemen. Luckily only 13 Shias were injured in the blast, but the violence needs to end.

There were two incidents of anti-Shiism that Shia Rights Watch is aware of in Nigeria this month, but more information is always welcome. One was a letter the soon-to-be President of Nigeria in which the author warned of keeping Shias close or in the government in general. The author claims to not align with Boko Haram, but concludes his letter with, “If your promise is to tackle insecurity is real you must cut down the Shia.” The other incident was an attempt on the life of the Sheikh Zakzaky who is the leader of the Shia Islamic Movement of Nigeria. A mob of people with weapons approached his home twice within a 24 hour period, but were repelled by guards. Zakzaky has resided at that home for 20 years, and has never had trouble with the neighborhood before, and claims this was orchestrated by the security forces. 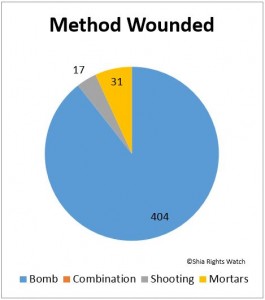 Bahrain regime forces have been otherwise tame this month as we do not have any recorded arrests against Shias. However, they did confiscate speakers, banners, and flags that the protesters use in front of the Al-Sadeq Mosque West of Manama. On May 11, a court in Bahrain extended Nabeel Rajab’s arbitrary detention by 15 days, and his six month sentence was upheld by an appeals court on May 14. Nabeel Rajab’s crime was peacefully protesting and using social media to call for a more representative government. A Shia man, Khalid Abdul Aal, was sentenced to one year in prison for insulting the government using Twitter. Bahrain Cleric, Jalal al-Sharqi denounced Shias claiming that they do not believe in Allah, are Jewish, and deserve no mercy. The Bahraini government has done nothing to dissuade these anti-Shia messages, and must do so in order to curb sectarian hatred.

The Mayor of Mogadishu, Mohamed Hussein, has vowed to shut down any humanitarian Non-Governmental Organization that is spreading Shia Islam. He said that, “Somalia is a Sunni nation, and don’t need false Shia ideology. As a Mogadishu Mayor, I will not allow Shia ideology to spread and will fight at every cost.” This is the first instance of anti-Shiism that Shia Rights Watch has recorded for Somalia in 2015.

In February, 31 Shia Hazaras were abducted from a bus in Afghanistan, and last month Shia Rights Watch reported that three of them were found dead. Just as hope was looking dim, 19 Hazaras from the kidnapping were released on May 11. There were rumors that this was in exchange for 22 detainees, but the Afghan government denies these claims. 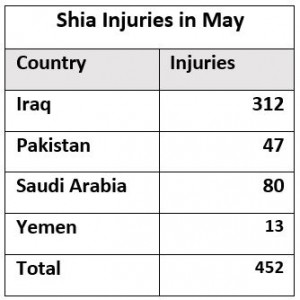 The amount of Shia killed by bombs this month is about the same, but the amount of Shias wounded from bombs has increased 23 percent from last month. Terrorists began using mortars again, and those have not been used since March (most recent). The deaths from shootings decreased this month, and this month there were injuries sustained from gunfire. There have been no beheadings or stabbings of Shia this month. The utilization of a combination of methods to kill Shia has increased slightly from 60 to 78.

More governments and government officials are taking anti-Shia stances, and it is a worrying trend. Citizens look to the government for leadership, and these attitudes can have a significant impact on the populace. The events in Pakistan and Saudi Arabia could be demonstrating that incidents in those countries will increase. Thankfully, some of those who were abducted in Afghanistan are being returned to their families, and there were no reported beheadings this month. Hopefully we will continue to see trends of decreased arbitrary arrests, sentences, and violence against Shia as time continues.