A Week Full of Sorrow for Iraqis 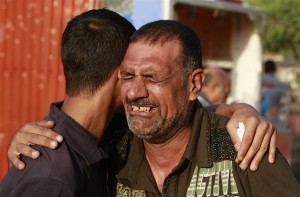 Pain and sorrow increases as many Iraqis lose their loved ones every day.

First week of October turned to a bloody week in Iraqi Shia Muslim populated areas. At least 202 people have been killed in six apparently coordinated bomb attacks in different cities.

Another explosion happened inside a cafe north of the capital and killed at least 66 people.

On the same day a suicide bomber killed 27 in the Shia Turkomen village of Qabak, just outside the town of Tal Afar.

One car bomb in the Tal Afar village targeted an elementary school while children ages 6 to 12 were in class. The dead included 12 children, the school principal and two policemen. Another 90 people were wounded, according to sources. The village is home to only about 200 residents, and part of the single-story school collapsed as a result of the blast. At least 12 people were killed and 23 wounded in that attack, according to police and hospital officials.

For the second time in less than 24 hours a suicide bomber managed to pass security checkpoints and target Shia pilgrims making their way to a golden-domed shrine in northern Baghdad where two revered Shia Imams are buried.

There was no immediate claim of responsibility, but suicide bombers and car bombs are frequently used by al-Qaida’s Iraq branch. It often targets Shia civilians.

Almost 1,000 were killed in Iraq in September alone according to the UN and the violence against Shia Muslim continues with no prevention strategies from Iraq government.

ongoing violence in Iraq is shame for humankind, says SRW.