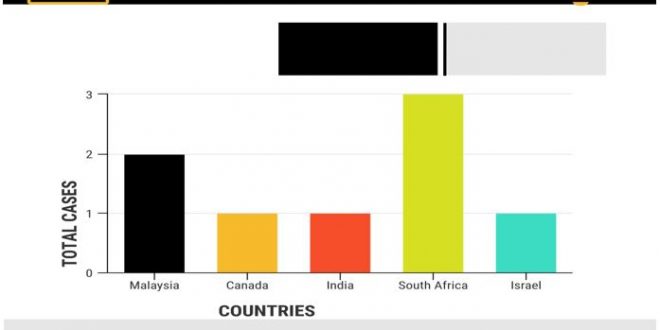 Anti-Shiism is prevalent and spreading in 2018. Already halfway through the year, the number of countries where Shia Muslim violations have occurred increased from 6 in January to 16 by the end of June. Countries examined in this report for their anti-Shiism include Nigeria, Bahrain, Malaysia, Pakistan, Saudi Arabia, South Africa, Iraq, Canada, India, Afghanistan, and Israel. Some of the worst months for Shia Muslims thus far are January and April, each having 673 total incidents of Anti-Shiism. Already at half of the year, there have been a total of 356 Shia killed, 812 Shia wounded, 352 Shia sentenced, and 666 Shia arrested. Some standard methods of anti-Shia attacks include shootings, bombings, torture, home raids, abductions, deportation, denial of medical care, institutionalized anti-Shia laws, stabbings and more. Currently, the most dangerous country for Shia civic and human rights violations is Bahrain, leading with a total of 1,287 anti-Shia incidents. From January to June 2018 there was an average of 468 cases of Anti-Shiism per month worldwide.

April is one of the months with the highest cases of Anti-Shiism, and because April coincides with the month of Shaban in which Shia Muslims celebrate a number of occasions. The spike of violations during this month is aimed at limiting the Shia communities participation in Shia related activities or gatherings.

It is important to note that Shia rights abuses listed in this report are a summary of incidents that have been reported to Shia Rights Watch. Violations are not limited to those in this report. More information can be found on ShiaRightsWatch.org.

Bahrain started 2018 with a total of 497 incidents of anti-Shiism in January, the majority of which were arrests and sentences. Now, halfway through the year, Bahrain is at a total of 1,287 cases of anti-Shiism. Although Bahrain is a Shia majority nation, it is governed by a non-Shia monarchy that systematically tyrannizes Shia Muslims due to their ideological beliefs, and continuously violate the fundamental Human Rights of the Shia Community. While the reported number of physically wounded only totals seven during the first six months of 2018, it is estimated that the exact number is likely higher due to abuses sustained during detention. The usage of torture is prevalent in Bahraini prisons, and physical abuse is widely underreported or ignored in any official capacity. Many detainees suffer serious health issues and are repeatedly denied access to medical attention while imprisoned, and those with pre-existing conditions suffer severe deteriorations in their health.

The total number of arrest made was 678, and many of those arrested continue to be detained without proper due process procedures. Article 9 of the International Covenant on Civil and Political Rights states: “Anyone arrested or detained on a criminal charge shall be brought promptly before a judge or other officer authorized by law to exercise judicial power and shall be entitled to trial within a reasonable time or to release. It shall not be the general rule that persons awaiting trial shall be detained in custody, but release may be subject to guarantees to appear for trial.” Article 9 also addresses the right to legal representation with consent, with adequate time allowed to prepare for a defense strategy. These rights have been stripped away from countless citizens of Bahrain, and Shia Muslims, in particular, are targeted. The most significant number of Shia arrests occurred in March 2018 with 178 incidents, proving March to be the most dangerous month for Bahrain so far this year.

The total number of other cases of Anti-Shiism include home raids, deportation, abductions, denial of medical care, and destruction of Shia Mosques, totaling an additional 602 incidents. The highest number of Shia arrests occurred in March 2018 with 178 events, proving March to be the most dangerous month for Bahrain so far this year. March was full of Bahraini officials cracking down on alleged acts of “terrorism,” even relating terrorism to accusations of affiliation with Iran.

Compared to other countries, Bahrain has the most systematically oppressive laws explicitly designed to target Shia Muslims. For example, King Hamad banned members from Shia opposition parties from running in upcoming elections. Limitations in civic activity is a ban that strips Shia of their political rights. Bahrain continues to imprison Shia Muslims that disagree with the regime for reasons of “treason,” unjustly and systematically oppressing them.

Ultimately, the majority of incidents against Shia Muslims result in them becoming prisoners of conscience with the entire legal system revolving around the repression of Shia Muslims.

Nigeria started the year with only two cases of Anti-Shiism in January and spiked up to a total of 329 by the end of June. Arrests make up 89% of all incidents of anti-Shiism in Nigeria, with a total of 293 so far this year. Most of these arrests occurred in April.

In April, a week after the daughter of Sheikh Zakzaky declared that Nigerian officials continued to deny her father necessary medical treatment for his deteriorating glaucoma. About 230 reported peaceful protesters were arrested as they gathered to demand the release of Sheikh Ibraheem Zakzaky, an Islamic Movement leader, unjustly held in prison by the Nigerian Federal Government since December of 2015. In an attempt to disperse the crowd, Nigerian police officers opened fire on the group and employed the use of tear gas, killing one person and injuring two. Although there was a 2016 court order authorizing the release of Zakzaky, the authorities have failed to enact the order. Shia protestors say they are being specifically targeted and are unjust victims of police brutality. Systematic targeting of Shia Muslims is a violation of Article Eighteen of the Universal Declaration of Human Rights which recognizes the universal right to freedom of belief and religion. Although 89% of Nigeria’s cases were arrests, Shia Muslims are still being killed and wounded in Nigeria. So far in 2018, five people have been killed and another 25 injured for being Shia. Most attacks have been carried out by police forces. 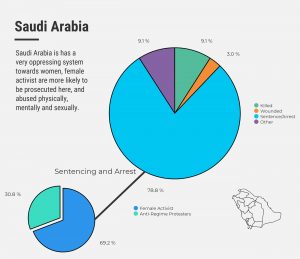 These female activists were arrested for advocating for a progressive reform for women’s rights. These arrests, as well as reports of intimidating phone calls warning activists to remain silent, are being viewed as a reiteration that only the government has the power to enact change and that protests against the traditional modus operandi will not be tolerated, leading to activist arrest by charges that are anti-establishment activities. SRW notes that in Saudi Arabia female activist are more likely to be arrested, with the more than half of the cases of arrest and sentencing explicitly being female activists.

As the dominance of ISIS has diminished in Iraq, we have seen the overall level of violence in the country come down. However, there are still clear incidents of anti-Shiism being enacted all across the countryside. Iraq has had a spike in terror activity and strategic attacks in Shia-majority regions this year as the efforts to minimize the influence and prevalence of this population increases. Shia neighborhoods in Baghdad continue to be one of the most affected areas of sectarian violence, and Iraq overall is one of the most turbulent locations for Shia Muslims. Iraqi Shia were victims of roadside bombings, suicide bombings, mosque bombings, targeted poisoning, snipers, shootings, and beheadings. The most deadly day came in January when twin suicide bombings in a public square killed 38 people, wounding another 105. Overall, 186 people were killed and 524 injured for their faith during the first six months of 2018. With a total of 710 physically violent incidents of anti-Shiism, Iraq is one of the most dangerous places for Shia Muslims in the world.

2018 started off relatively quietly for Afghanistan but progressing into March and April; there was a sharp spike in anti-Shia incidents. Suicide bombings during these two months alone took the lives of 118 Afghan Shias, wounding 228 others in the process. The most significant day came on April 22nd in Kabul with multiple attacks. Bombers targeted Hazara Shias at voter registration locations, killing 63 and wounding over 100 others as they waited in line to get their voter cards. ISIS claimed responsibility and said they were intentionally targeting Shia. Later that afternoon, a roadside bomb took the lives of 6 others, making it the deadliest day of 2018 so far. Lack of institutional protection for minorities like Shia Muslims has left this population vulnerable to targeted attacks from extremist groups like ISIS and the Taliban, two groups who consider Shia to be infidels because of their faith. In the first six months of 2018, the total number of Afghan Shia killed rose to 122, and the number wounded in attacks grew to 233.

Reports and analysis detailing vulnerability of ethnic Shia populations such that of the Hazara can be found on ShiaRightsWatch.org.

Like Afghanistan, Shia Muslims in Pakistan live with the constant threat of targeted terrorism due to a lack of substantial government interventionist measures. Radical anti-Shia sentiment is allowed to flourish, making Pakistan a hotbed for violent incidents of anti-Shiism. 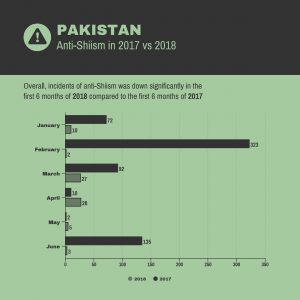 The fear for Pakistan’s future is that extremist groups like Ahlu Sunna Wal Jama (ASWJ) will continue to assert their influence on the government in a systematic fashion, normalizing violence against the Shia population until anti-Shiism becomes institutionalized. For example, in March, a member of the ASWJ used his connections at the JUI political party to bring charges of blasphemy against 20 Shia Muslims in the Sindh province. This case was a blatant attempt to normalize blasphemy as punishable by law to make religious discrimination in Pakistan systematic, rather than just an extremist sentiment.

Other countries around the world are contributing to the spread of anti-Shiism in a variety of ways. In a recent video published by the head of the Arab media division for the Israel Defense Forces (IDF), Avichay Adraee commented that the Shia are a threat to the stability of the region, inviting “Arabs and Muslims” to take his advice and resist Iran. Adraee references sources in Islamic literature to warn about the Shia faith, and then talks about the danger of Iran’s influence on the region. Although it is expected for an Israeli officer to have negative comments on Iran and reaction to its political movements, it is not acceptable to degrade a faith or religion and associate them with a specific country. SRW believes such action and comments from the Arab media division of the IDF Spokesperson’s Unit is a certain false association. Limiting Shia to one nation and identifying them as a threat by Adraee is clear evidence that there must be more education and advocacy for Shia rights. Shia Muslims must not be associated with any particular country, political or ethnic group.

There was a similar thread of Anti-Shia rhetoric in South Africa in May with postings such as “If you kill a Shia you go straight to heaven,” and “When walking in the street, or in public places, it’s becoming increasingly important to become vigilant as to who may be a Shi’ah, and who may be not. Here are some general guidelines…” These remarks were posted on Facebook accounts and aired on local radio talk shows. Shia Muslims have been proven to be positive and peaceful contributors to their communities and are loyal to their homelands no matter what country they belong to. However, with the spread of anti-Shia speech, the anti-Shia sentiment is prevailing.

Elsewhere, Shia Muslims are experiencing forced disappearances for their beliefs. In Malaysia, a foreign exchange trader went missing after it was discovered he followed the Shia Muslim tradition.

In February, a prominent Shia leader and activist were shot dead in Kashmir region of India by ISIS terrorists as he was traveling.

Furthermore, lest it is thought that anti-Shiism doesn’t affect Shia communities in the West, in February prayer stones in University of Toronto prayer room were vandalized, and a letter was left stating: “To the Shia: No such thing as following Imam Ali. And no such thing as using a stone for praying. – Kind Regards.”  This is further proof that anti-Shiism sentiment knows no boundaries and can be used against Shia Muslims anywhere, anytime, for any reason.