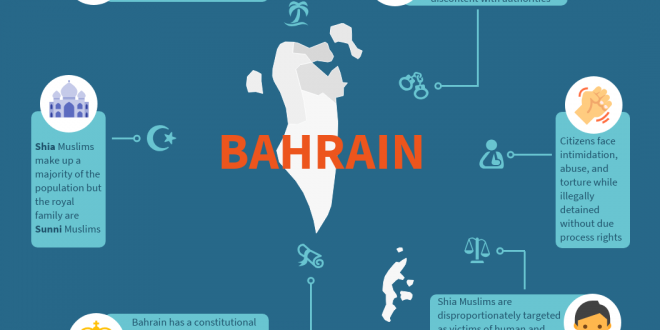 Expansion of Anti-Shia Laws in Bahrain

After 9/11, the US adopted an ideology of “war on terror,” a systematic campaign using a variety of legislative and judicial methods designed to target extremist groups bent on the destruction of civil society. Some have suggested that in the years following many authoritarian regimes have adopted similar “war on terror” policies with the purpose of gaining international recognition for positive cooperation in the global fight against terrorism. More to the point, critics say that in reality, these laws are just a thinly veiled method of systematically discriminating against political dissidents, peaceful protestors and activists, and civil society organizations.

In Bahrain, the passage of these types of “anti-terrorist” laws have opened the doors to legalizing criminalization of basic rights and freedoms of society such as political dissent and the freedoms of speech and assembly. After a series of popular anti-government protests began in 2011, the Bahraini government began a systematic crackdown on protesters and Shia clerics who had organized calls to abolish the monarchy and reform the government. Now, a group of organized citizens gathering together to raise their concerns about abuses of power can be targeted by the law as “terrorists” for threatening the authorities. By keeping the definition of “terrorism,” broad, authorities can apply punishments to any number of legitimate civil activities in which they can allege are harmful against the kingdom or which damage national unity.

Bahrain has 1.57 million people, the majority of which are Shia Muslims. The remaining population demographics are split, but Sunni Muslims are the second largest group, which includes the royal family who follows in the hardline Wahhabi fundamentalist movement.

The Bahraini authorities have spent years creating laws with the sole intent of targeting citizens of the Shia faith. According to Bahrain Center for Human Rights (BCHR), the king has abused his authority by invoking these new provisions and amendments without referring to parliament’s legislative authority, giving him “unrestricted discretionary authority over pre-trial detention, investigative authority, the formation of the advocacy and offense characterization.” Article 160 of the Penal code states that a person can be imprisoned for promoting “in any manner the overthrow or changing the political, social or economic system of the State where the use of force, threat, or any other illegitimate method is noticed.” Likewise, possession or distribution of documents or recordings that can be perceived as anti-State can also be punished.  This is a clear threat to freedom of the press and a free media, protections which are championed in Article 19 of the Universal Declaration of Human Rights. These violations also go against Article 9 of the International Covenant on Civil and Political Rights, which states: “Anyone arrested or detained on a criminal charge shall be brought promptly before a judge or other officer authorized by law to exercise judicial power and shall be entitled to trial within a reasonable time or to release. It shall not be the general rule that persons awaiting trial shall be detained in custody, but release may be subject to guarantees to appear for trial.” It also addresses the right to legal representation with consent, with adequate time to prepare for a defense strategy. These rights have been stripped away from countless citizens of Bahrain, and Shia Muslims, in particular, are being targeted.

Evidence suggests that enforcement of these laws have risen exponentially in number and severity as a direct reaction to the popular uprisings which began in February of 2011. As a result, there have been thousands of prosecutions — both judicial and extra-judicial — against “terrorists,” which, in reality, are political trials against the exercise of fundamental civil and human rights. Using an example from a mass trial in May of 2018, a Bahraini court used terrorism-related charges to sentence 115 Shias to imprisonment in addition to revoking their citizenship. Not only did this trial violate international fair trial standards, but there is a reason to believe many alleged confessions were coerced or were obtained under violent conditions of torture. Additionally, since the constitution was amended in 2017, Bahrain has instituted the use of military courts to adjudicate civilian cases, a direct violation of the International Covenant on Civil and Political Rights which states that trying civilians in military courts should be prohibited unless all other legal provisions have been exhausted. As the authorities have consolidated their powers over the entire judicial process, the need to show proof of due process has become obsolete.

Article 29 of the Arab Charter on Human Rights, which has been ratified by Bahrain, states that “Every person has the right to a nationality, and no citizen shall be deprived of his nationality without a legally valid reason.” The revocation of citizenship has been a prominent method for punishing Shia dissidents in Bahrain. Since 2012, well over 700 people, mostly Shias have had their citizenship revoked. The government often claims the accused are acting as agents of a foreign government as the reason for this punishment. The addition of the aforementioned “anti-terrorism” laws have given Bahraini authorities alleged justification for this type of cruel punishment which is in clear violation of international standards for basic human and civil rights. The government has also engaged in intimidation tactics, bringing trumped-up charges against family members of dissenters, protestors, journalists, and lawyers as another form of systematic oppression. As Shia Rights Watch has previously reported, these so-called “anti-terror” efforts became even more questionable when a royal decree amended juvenile delinquency to include participation in public gatherings and sit-ins, justifying the arrest of minors. Shia Rights Watch approximates over 450 minors were detained calling into question Bahrain’s ratification of the Convention of Rights of a child in 1992.

In June of 2018, the King of Bahrain approved an amendment to the current election law. Dubbed “The Exercise of Political Rights,” the law prohibits “leaders and members of political associations dissolved for violating the kingdom’s constitution or its laws” from running as a candidate for election. Additionally, anyone “convicted of a felony, even if they have been granted amnesty” are officially barred from running for office. With parliamentary elections on the horizon this fall, the kingdom is seeking to solidify its hold on power by systematically eliminating virtually all formal opposition These new amendments have been condemned by the Al-Wefaq National Islamic Society, a Shia opposition group that was disbanded in 2016 by the Al Khalifah regime. According to Americans for Democracy and Human Rights in Bahrain, Bahraini officials “shut down [al-Wefaq’s] website, closed its headquarters, and seized its assets.” Al-Wefaq released a statement condemning the amendments, saying that “the legislation deprives more than 50,000 Bahraini nationals of their civil and political right to run in elections.” They have previously stated that the government’s insistence on crushing political dissent is “irrational and irresponsible” and is done with the intent to “destroy political and social life by blocking the people out.” Also, authorities have blatantly gerrymandered districts to ensure that the Shia population is underrepresented, that government supporters are favored, and to prevent opposition groups from being able to gain more significant influence in politics.

Ultimately, all of these heinous actions taken by the Bahraini government has radically altered the political, cultural, and socioeconomic landscape of Bahrain. By silencing opposition and explicitly targeting Muslims of the Shia faith, the government of Bahrain has devolved into one of the gravest enemies of human rights and freedom of conscience. Shia Rights Watch calls on the Bahraini authorities to uphold their international obligations to respect human rights and protect the freedoms the international community holds as fundamental as enumerated in the Universal Declaration of Human Rights. Governments by design are charged with the responsibility to ensure the safety and security of all of their citizens, regardless of race, color, or creed, and must create a national dialogue that allows for political participation, activism, and dissent. Authorities must end military trials for civilians, illegal detention of dissenters, the use of torture and coercion on detainees, and the implementation of mass stripping of citizenship as punishment. In line with the European Parliament’s joint resolution on the human rights situation in Bahrain, SRW “encourages the Government of Bahrain to aim for stability through reforms and inclusive reconciliation in an environment in which legitimate and peaceful political grievances can be expressed freely.”