A side event co-hosted by

Since early 2011, the Bahraini government has engaged in an unprecedented campaign to criminalize freedom of speech and expression, association and assembly.
In September 2012 the UPR report on Bahrain was welcomed and the International Community urged the government to implement fully the accepted recommendations of the Bahrain Independent Commission of Inquiry (BICI). Nevertheless, the government has continued the suppression and harassment and there are now more people in the prison system than ever before, causing overcrowding, unsanitary conditions, and furthering inhumane treatment.
Of greatest concern are the children who share the same fate as adults, accused and imprisoned on trumped up charges, to the extent that they are not dealt with in a manner that respects the United Nations Convention on the Rights of the Child (UNCRC) in any way. They are forcibly taken from their homes, schools or while at play, are physically brutalised and forced to become informants, and incarcerated in adult prisons as hostages to quell dissent in the broader family. The number of children currently detained in Bahraini adult prison facilities, and without access to medical care or education, has risen to more than 500.
Elsewhere police dogs are lead around inside classrooms, and tear gas has been used outside the schools at home-time which has caused panic and has an adverse health impact. Children have been shot at with tear gas canisters and peppered with shotgun pellets (bird shot) while at play in the street or when accompanying their parents on market stalls or elsewhere. Each of these abuses displays total violation of the United Nations Convention on the Rights of the Child, ratified by Bahrain in 1992.
In an effort to encourage positive, productive engagement, and appealing for international attention and pressure to address the situation in Bahrain, we aim to discuss strategies to hold the government of Bahrain accountable for denying the rights of children, demand to take practical steps to address the concerns reflected in the UPR debate, and most urgently to immediately release all children and youths held in custody under false allegations. Youths charged of criminal offences should be provided legal and other appropriate assistance as prescribed by the UNCRC.
This event lends us the exceptional challenge to examine the destructive effect of the criminalisation of children in Bahrain and will tackle crucial matters of international concern around the Bahraini Governments attitude towards the children of families whose allegiance is under suspicion. 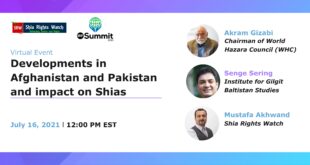