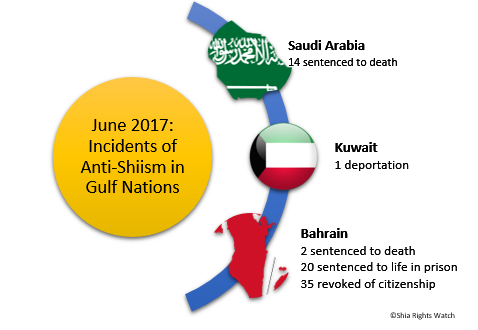 Incidents of Anti-Shiism in JUNE, 2017

June 2017
Anti-Shiism Across the Middle East

As anti-Shiism runs high, over 133 were killed in the month of June. New this month are attacks on Iranian soil and a death sentence given by social media posting in Pakistan. A compilation of news from on the grounds sources and major news agencies point to the prevalence of anti-Shiism at the heart of recent terror attacks. All cases reported in this report were proven authentic via research and corroboration with Shia rights activists in each country. This report will examine cases of Shia deaths, injuries, and arrests. 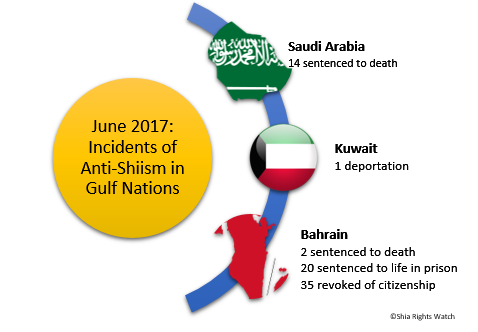 Anti-Shiism in June occurred in but were not limited to Iraq, Iran, Pakistan, Afghanistan, Bahrain, and Saudi Arabia. It is important to note that Shia rights violations listed in this report are a summary of incidents that have reached Shia Rights Watch (SRW). A lack of reporting by victims is mainly due to the systemic, cultural and direct violence within the non-Shia States. Thus Shia Muslims fear to report crimes as it may lead to loss of life and social isolation. More information can be found on ShiaRightsWatch.org.

While all nations listed in this report are areas of concern for Shia Rights Watch, the following countries displayed a shift in anti-Shiism dynamics. In 2016, Pakistan announced a “Prevention of Electronic Crimes Act of 2016,” making online postings grounds for charges. This law has been deemed highly controversial as its punishments are “harsh” and its lack of-of concise language leaves room for misuse by authority figures. Now, this law has been the grounds for execution charges for a Shia individual. More information regarding this case can be seen later in the report or online at ShiaRightsWatch.org.

The second nation of concern in the month of June is Iran as this country has witnessed its first ISIS attack its soil. Iran is one of the most Shia populated nations in the world, and it has numerously announced patronage for the international Shia community. Attacks in Iran increase fear and tension within the region, making this nation a second point of concern for Shia Muslims. Saudi Arabia continues to be monitored for human rights violations as the conflict in Awamiya continues.

June stood witness to the death of over 43 Shia civilians. A-bomb detonation in the east of Karbala, in the town of Musayyib, killed  30 and left 35 injured. The detonation was one of four explosions set to go off on that day. Hours after the first bomb, another explosion went off in the city center, wounding 34 others. Sources report that those wounded are in critical condition- the death toll is likely to rise. The third of the bombs was foiled previous to detonation at the shrine of Imam Hussain, a historical landmark central to the Shia faith. Explosions were focused on areas populated with civilians- Marketplace, a religious shrine, city center, and lastly the city’s central bus station.

Despite claims of increased security measures in for the occasion of Ramadan, the city remains alerted. All attacks were claimed by ISIS jihadists. Some sources believe increased attacks on civilian life is in retaliation of lost battlegrounds in other regions of Iraq.

While ISIS claims responsibility, Iranian authorities view Saudi Arabia suspiciously. The idea of Saudi Arabian support for the terrorist group is a reality on the ground in the Shia-dominated state, and indirect hostilities between the two have been at an all-time high.

For years, Iran has claimed leadership of the global Shia population. The recent attack on Iranian soil points to an advancement of ISIS powers in the region and furthers claims of anti-Shiism by terror organizations. Shia Rights Watch anticipates further anti-ISIS developments in Iran. 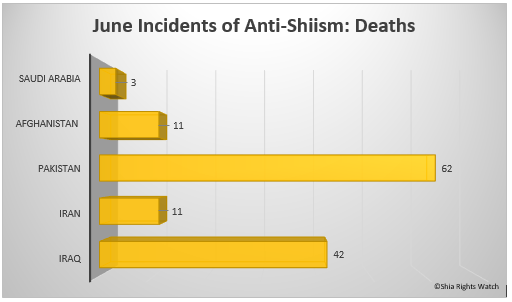 Late June stood witness to the targeting of Shia Muslims preparing for Eid celebrations. Three separate explosions in Parachinar and Quetta left over 62 dead and 100 other injured. The incidents were claimed by Jamaat-ul-Ahrar, a splinter of the TeT terror organization. The blasts were coordinated and timed as they occurred on the same day and planned to target the most people. Anti-Shia sentiment is apparent in attacks in Pakistan as they took place in Shia majority locations of the main cities. The incidents stand in support of anti-Shia beliefs that Shia individuals are not Muslims and are seen as unworthy of basic human rights.

Two explosions occurred in Afghanistan during the month of June in 2017. Both explosions caused multiple casualties and amassed a total of eleven deaths. These attacks took place in the holy month of Ramadan and followed an insurgence of assaults aimed at the Shia minority population within Afghanistan.

The first bomb detonated in Kabul near the Great Mosque of Herat on the 6th of June. The bomb killed seven people and wounded 17. No group has taken credit for the bombing. Although the Taliban denies involvement, Afghan intelligence believes a Pakistani group aligned with the Taliban, called the Haqqani Network.

The second attack occurred on June 15th in Kabul. Four individuals were killed in the blast caused by a suicide bomber outside the al-Zahra mosque in the southwestern area of the city, Dashte Barche. One of the people killed was the leader of the Hazaras in Afghanistan, Hajji Ramazan Hussainzada. The Hazaras are an ethnic group within the Shia population. The attack wounded seven other people. The source of the blast has yet to be confirmed, though the spokesman for Afghanistan’s Interior Ministry reported that the two attackers tried to enter the mosque before having a shoot-out with the police. One of the attackers made it to the kitchen, where the bomb was detonated. These two attacks continue the series of deadly attacks that have been targeting the minority Shia population in Afghanistan.

Since 2011, Bahraini authorities have been cracking down on protesters that the government fears undermine its position. The protesters are the Shia majority of Bahrain which is often excluded from power. Inspired by the Arab Spring, Bahrainis have taken to the streets. The banning of the Shia political group Al-Wefaq led to further uprisings, and the government responded. This month, Shia Rights Watch has monitored multiple arrests, life sentences, death sentences, and violence institutionalized by the government.

On June 6, Bahrain’s 4th High Criminal Court delivered death sentences to both Sayed Ahmed Fouad al-Abar and Hussein Ali Mahdi after they were arrested during a pro-democracy protest. Two others received life sentences, and eight more received sentences for three to ten years. When appearing in court, the accused seemed physically exhausted which may hint at torture.

On June 15, in a large terrorist trial, 26 Shia Bahrainis were stripped of citizenship, 18 received life sentences, and eight received fifteen years in prison. The group arrested are all members of Diraz Youth, a Shia group based out of the neighborhood of Diraz that protest the monarchy as a community.

Leaders of the Shia community are not exempt from the crackdown. On June 16, Sheikh Hussein al-Sitri was arrested after interrogation even though no charges were announced. On the 19th, Sheikh Salman was sentenced to four years for promoting disobedience and insulting public institutions.

On the 20th, pro-democracy protester Nabeel Al-Samie was found dead after being kidnapped from his farm. Witness reports say that there were signs of extreme torture, and that may be the cause of death. Members of the Ministry of Interior are reported to have been involved, but when investigated, Bahraini authorities stated that the cause of death was by bombing.

Since the demand for democracy and equal rights for the Shia majority, the Bahraini monarchy has stifled any sign of resistance by force. The liberal handing out of life and death sentences proves that the al-Khalif monarchy has little interest in granting equal privileges to all its citizens. 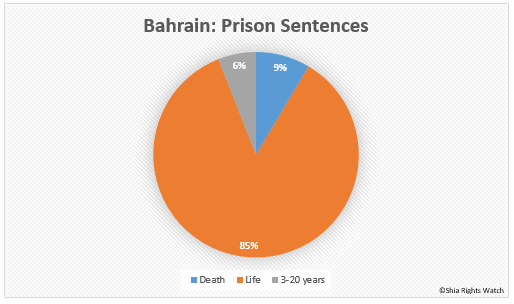 Saudi Arabia has laid siege to a village called Awamiyah located in the eastern province in the Al-Qatif region. Last month, the Saudi government surrounded the city and attempted to evict the Shia community, stating that the eviction was necessary for renovations. According to residents, cars, fire engines and ambulances are still not being allowed in or out of the area. The Saudi government is using excessive tactics and provoking violence throughout the neighborhood.

On June 7, 14 from the Qatif region were sentenced to death for protesting. They had been detained for two years previously, some in solitary confinement. Lynn Maalouf from Amnesty International stated that the death sentences were based on confessions that were extracted out of coercion. Those sentenced later rescinded their confession.

On June 12, the Saudi military targeted houses of the Shia residents in al-Deira, a neighborhood of Awamiyah. The attack was an uncoordinated lobbying of mortar rockets, adding to the destruction of the community.

On June 14, the carnage continued as Saudi forces deployed snipers onto the rooftops. They commenced firing at civilians, wounding 31, many of whom were women and children. The next day, Saudi troops launched an offensive, to send forces with heavy weapons. Abdullah al-Faraj was shot and died of his wounds. Forty more were wounded.

On June 27, Saudi forces shot Amin Al Hani, head of the Quranic Council of Qatif near a military checkpoint. His vehicle caught fire and incinerated his body.

In the past two months, the Saudi regime has tightened its grip in the Al-Qatif region. The government is bulldozing houses and using conventional weapons to eliminate those trying to preserve their homes. Though a minority, the Shia are still Saudis, and the government has a responsibility to protect its citizens.

A large number of attacks against Shia majority areas took place in the month of June. These attacks occurred in the holy month of Ramadan, which began May 27 and ended on June 24. During this time, Muslims fast from sunrise to sunset, making the marketplaces and mosques an easy target at night. From the ISIS claimed bombing in Iran to the government led blockade in the Al-Awamiyah region of Saudi Arabia, the Shia population is facing extreme systematic discrimination and persecution.

These incidents demonstrate the continuing persecution of Shia populations around the world. Shia Rights Watch urges further protections for Shia majority areas and implores the countries where these incidences occur to add prevention measures to thwart future human rights infractions against Shia Muslims.