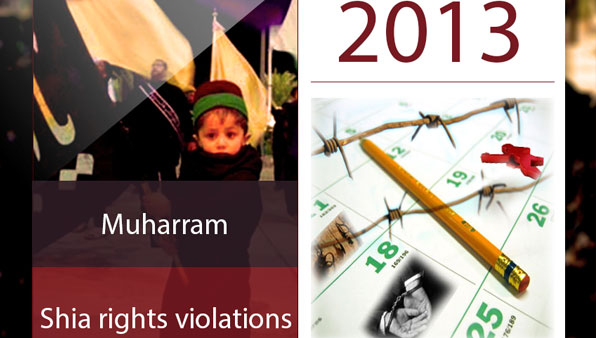 Every year hundreds of Shia Muslims are killed, their centers are closed and their active members are arrested by anti-Shia governments or extremists. Muharram of 2013 was another campaign full of fear and bloodshed.

As Shia Rights Watch predicted this Muharram Campaign was another unfortunate opportunity to pressure and limit Shia Muslims in different countries. In some cases such as Saudi Arabia, Kuwait, Iran and Bahrain the oppressor and violator is the government and in other countries such as Egypt, Pakistan and Morocco the government is not the obvious violator but supports the violators by covering up their actions.

This article intends to summarize violations that Shia Muslims faced during their peaceful participation in Muharram Campaign of 2013.

Traditionally Egyptian Shia Muslims carry their campaign at Al-Hussein Mosque in Cairo. Last year and this year Salafis and anti- Shia groups threatened to kill whomever attend the Al-Hussein Mosque. As activists complained many Salafis gathered and blocked the Shia Muslims to enter the Mosque to participate in Muharram Campaign. The government has not taken any action to protect Shia Muslims or provide safe environment for them to participate in their humanitarian campaign.

Wahhabi and anti-Shia clerics carried motivational speeches and called Shia infidel starting the month of Muharram. They urged people to prevent Muharram Campaign. According to SRW representative in Rawalpindi, about 600 people stopped Shia from entering their center by throwing stones at them. Numbers of gunmen were present among the attackers and shot and killed as many as 10 Shia Muslims, and wounded 30 others. Also numbers of Shia Islamic Centers were burned down.

Also Syed Shabir Hussain Shah, director of student affairs at a university in the eastern city of Gujrat city in Punjab province, was attacked while on his way to the campus by unidentified gunmen riding a motorcycle. Pakistani government has failed to protect Shia Muslims in all their peaceful rituals.

Forces of one of the local government attacked and destroyed a tent designated to Muharram campaign. As activists report Shia Muslims have obtained permission to set up the tent, yet the authorities destroyed it. They also damaged flags and banners and personal properties of Shia.

Authorities attacked and injured Shia Muslims at their gatherings. Indian Shia who were participating in Muharram campaign were attacked by tear gas and arrested for no legal reasons. The government was directly involved in the violation toward Shia Muslims.

As Muharram campaign is honored by many Iranians, some social media outlets and web sites with domain name .IR insulted some Shia rituals in Muharram and even disrespected Shia scholars who advocate strongly for Muharram campaign. There is no evidence that government stopped or investigated this violation as they should have.

Iraq is the most important country for Shia in which Muharram campaign is carried by millions of people. Many Shia Muslims travel to this country in the month of Muharram. As many as 6000 Shia were killed in the year 2013 so far and 44 were killed for their participation in Muharram campaign. Terrorist have repeatedly aimed to destroy Shia historical sites and kill people who visit this country as part of Shia rituals.

Unknown terrorist targeted Shia Husseinia ( Islamic Center) in the city of Lausanne burning down the place. There were many damages to the property and the attackers are not identified yet. This is the first time such incident happens in Geneva.

Many Shia Muslims activist reported Bahraini authorities raided Shia gatherings and took down their banners and advocacy signs. Also government collected all the flags and flyers from private properties. The authorities threatened Shia Muslims to prevent them from participating in Muharram campaign. The Bahraini government is directly responsible for Shia violations especially during Muharram campaign.

The violations are not limited to those summarized in this paper but these are some evidences that show Shia Muslims are being oppressed and violated against in many parts of the world. One of the reasons that Shia honor Muharram campaign is to show their opposition to oppression and violence against humanity. It is expected to see oppressor governments fight and prevent Muharram campaign because this campaign threatens their powers, although Muharram campaign is not a politically motivated movement, says Shia Rights Watch.

By the start of month of Muharram SRW sent letters to all the embassies of the countries above urging them to honor Muharram campaign and protect Shia Muslims yet many Shia Muslims lost their lives and safety due to their governments’ ignorance.