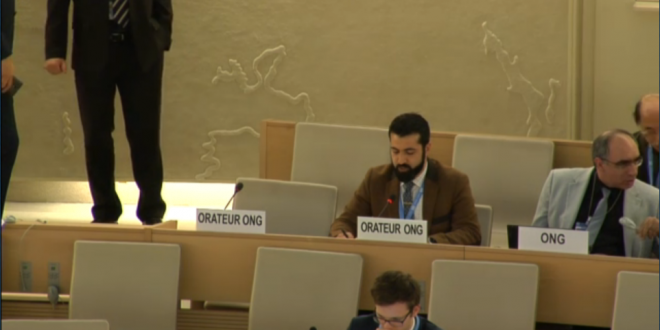 Recognition of Minorities in Malaysia the case of Shia Muslims

On March 15, 2016 Shia Rights Watch’s UN representative Mujtaba Akhwand  with cooperation with Freemuslim association participated in an item 3 Interactive Dialogue on Minority Issue regarding discrimination against Shia Muslims in Malaysia at 31st session of the United Nations Human Rights Council in Geneva.

Shia Rights Watch and Freemuslim Association would like to thank you and UN bodies for their work. We admire the endless effort of Human Rights advocates around the globe, and like to bring your attention towards Malaysia.  Malaysia’s violation of its own constitution in regards to minorities, and in particular Shia Muslim is alarming to us. According to articles 3(a) and 11 of Malaysian Constitution, shia muslims are not recognized as a religious entity, nor their rights are protected  when terror attacks happen.

Like many other countries, Malaysia is enriched by minorities, culturally and religiously, but unfortunately since they are not included in the country’s constitution,  Shia Muslims have no legal way to address the human rights violations terrorizing their family members, and loved ones. As citizens of Malaysia, they are contributors to Malaysia’s social, cultural, and economical betterment, but their faith is not recognized and are banned to practice their faith.

Since 1996, National Fatwa Committee (CFC) refrained it’s previously recognition of Shia Muslims as Muslims. Furthermore all educational materials that is different from the doctrine of the Ahl al-Sunnah wa al-Jama’ah, such as Shia doctrine, are recognized as unlawful.  This fatwa was a turning point, lead to increasing amount of discrimination, hate speech, and denial of rights regarding freedom of religion. Currently, four Shia Muslims face trials in court under Shariah Criminal Offences Enactment of 1997 in the state of Johore  based on Malaysia’s constitution, Section 9 and 12.During a court trial in this regard, on January 21st, 2016 the judge orders no public, nor media allowance to the court.   The lack of legal recognition leads to discrimination in all levels of legal system

Fatwas based on Sharia Law address followers of that religious sect, and faith of other citizens in  Malaysia are not considered in the implementation of law. All-inclusiveness in many other countries has led to their stability and ability to coexist, the Fatwa by National Fatwa Committee of Malaysia, decreases the ability of Malaysians to  peacefully pursue their daily lives, without fear of random attacks empowered by Fatwas or  hate speeches by extremists.