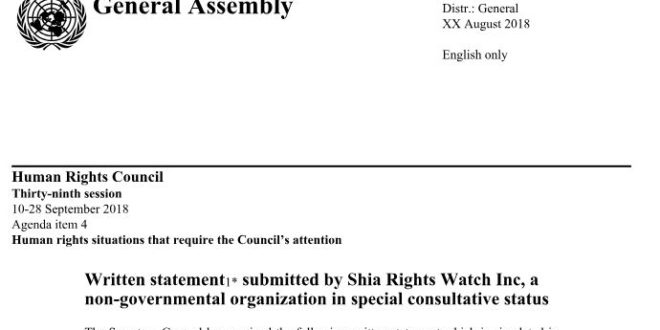 Shia Rights Watch invites the Human Rights Councils immediate attention to the escalation of human rights violations towards Shia Muslims in the Kingdom of Saudi Arabia.

As the representation of the worlds humanitarian voice, the Human Rights Council holds a responsibility to demand justice for violations against of all those quenching for civil liberties and fundamental human rights.

Within the Kingdom of Saudi Arabia, religious minorities are not recognized as official entities. In his rise to power, King Mohammad bin Salman claimed reformations that would reduce intolerance in the nation, yet the issue of systemic discrimination against religious minorities has not been met.

Given King Mohammed bin Salman’s call for reformation, now is the opportunity to support religious minorities within the country. Shia Muslims comprise approximately between 15% to 20% of the Saudi population. Mainly occupying the Eastern Province, Shia Muslims live in the nation’s most mineral-rich areas, yet they are granted the least public resources. Local activists report the Eastern Province as being the least developed region of the country.
Moreover, Shia Muslims report being discriminated against in education and occupation. Shia individuals working with the aim of empowering Saudi ideals are met with a glass ceiling to which their opportunities and growth are limited.

Due to the lack of recognition of Shia Islam as an officially recognized religion, human rights violation against religious minorities is justified. By identifying followers of Shia Islam as “apostates” or deviants from Saudi Arabian norms, Saudi officials legitimize violence and discrimination against this population.

Since 2015, Shia Rights Watch can account for 918 cases of violence in the form of home raids, arrests, arbitrary sentencing and killings in the hands of government officers, in addition to the demolition of Awamiya, a historical Shia residential town with 400-years of heritage.

The Case of Israa al-Ghamgham: The first female sentenced to execution

Within Saudi Arabia, not only are the Shia deemed infiltrates of foreign powers and treated as “vermin,” advocacy against discrimination by identity is criminalized. All avenues of civic engagement are cut off, and Shia Muslims advocating for equal rights in their homelands are penalized harshly on the most basic human freedoms, including but not limited to the freedom of religion, freedom of congregation, freedom of expression and freedom of speech.

In a recent trend, Saudi officials have intensified anti-Shiism by sentencing the first Shia female to death. Israa al-Ghamgham, a Shia Rights activist was arrested with her husband Musa Jafar al-Hashim. Al-Ghamgham has been detained in the General Intelligence Prison in Dammam, where she has been charged with recruitment in Qatif.

The Saudi regime has arrested several women from the Eastern Province with political involvement accusations, including but not limited to Naima Al-Moustoud, Fatimah Nassif, and Nasima Al-Sada.

While Al-Ghamgham is not the first female arrested, her death sentence raises immediate concerns for women of religious minorities in the Kingdom of Saudi Arabia as the harsh sentence is a sign of heightened anti-Shiism across genders.

Extreme anti-Shia propaganda by the Saudi government is a detriment to not only Shia Muslims native to the Kingdom, but also Shia Muslims who are active citizens of other nations. Saudi Arabia is home to two of Islam’s most sacred religious sites, and every year, millions of Muslims flock to the Kingdom to make their Hajj pilgrimage. Contrary to Hajj rituals that are meant to cultivate unity amongst Muslims, Shia Hajj participants report physical and psychological abuse. They face targeted discrimination by Saudi law enforcement agents, such as incidents of sexual harassment, unreasonable stop and search tactics, unwarranted searches, summons, imprisonment, and general harassment.

Shia Rights Watch calls for immediate action by the Human Rights Council in response to escalating incidents of anti-Shiism in the Kingdom of Saudi Arabia.

Recognition of Shia Muslims as lawful citizens would be a definite step towards reducing human rights violations, not just in the nation but throughout the Gulf region. Furthermore, systemic recognition of Shia Islam within the area would reduce existing social tensions, increase the nation’s economic prosperity and promote civility in the Middle East.