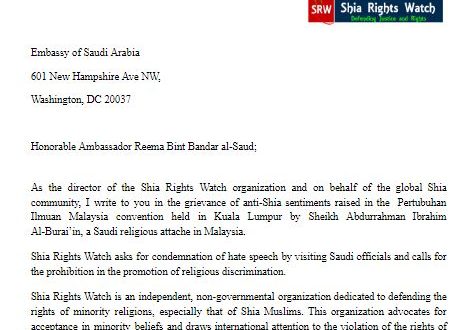 As the director of the Shia Rights Watch organization and on behalf of the global Shia community, I write to you in the grievance of anti-Shia sentiments raised in the  Pertubuhan Ilmuan Malaysia convention held in Kuala Lumpur by Sheikh Abdurrahman Ibrahim Al-Burai’in, a Saudi religious attache in Malaysia.

Shia Rights Watch asks for condemnation of hate speech by visiting Saudi officials and calls for the prohibition in the promotion of religious discrimination.

Hateful speech by Sheikh Abdurrahman Ibrahim Al-Burai’in against Shia Muslims threatens the peaceful existence of religious groups in the country of Malaysia. Within his speech, Al-Burai’in excluded the Shia from the religion of Islam and presented false information in regards to the beliefs in the Shia doctrine.

The words of Sheikh Abdurrahman Ibrahim Al-Burai’in promotes a negative image of the nation of Saudi Arabia and extends images of the country as a discriminatory, hate-promoting, foreign influence. Such influence counters efforts of King Mohammad bin Salman’s in the creation of a new and improved Saudi Arabia.

Shia Rights Watch asks for a condemnation of any speech that marginalizes any religious group, both in the nation of Saudi Arabia and in countries with Saudi presence.

With hopes of an inclusive world,

In response to the hate-inciting speech by Sheikh Abdurrahman Ibrahim Al-Rubai’in, a Saudi religious attache …