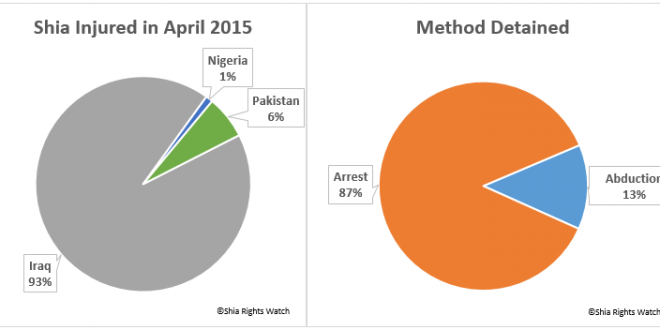 Incidents of Anti-Shiism in April 2015

There has been a decrease in both the number of Shia killed and those that were injured during attacks. However, there has been an increase in the amount of Shia arrested around the world. There were more than 300 deaths and over 250 injuries this month. There were also 19 abductions and 126 arrests in April. These figures result in an average of nearly 11 deaths per day, more than 8 injured Shia per day, and almost 9 people arrested every two days. Anti-Shiism has spread to more countries this month compared to earlier months this year, and is now confirmed as present in Nigeria and Madagascar in 2015. Anti-Shiism is a growing trend that will continue to gain notoriety until the international community addresses the issue.

This report will analyze the data compiled on Shia deaths, injuries, and arrests that occurred between April 1st and April 30th. The data for this report was gathered from a variety of different sources. Each incident is thoroughly evaluated for both authenticity and relevance. For an incident to be included in this report it has to show clear intent to target Shia Muslims on the basis of religious beliefs. The subsequent sections will present and analyze the data gathered by Shia Rights Watch for March.

April saw Shia Muslims targeted in 8 different countries: Iraq, Afghanistan, Pakistan, Saudi Arabia, Nigeria, Bahrain, Syria, and Madagascar. In total there were 306 deaths, 279 injuries, and 126 arrests. Although this data focuses primarily on the aforementioned categories, incidents such as the abductions of Shia in Afghanistan and Syria will be mentioned in this report. An overwhelming majority of the Shia deaths and injuries in April occurred in Iraq, whereas the bulk of the arrests took place in Bahrain. 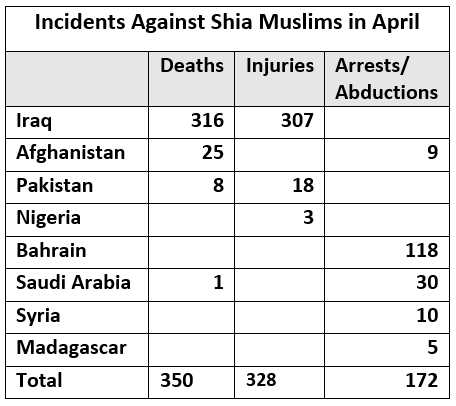 The violence against Shia Muslims in Iraq continues to be the actions of non-state actors persecuting Shia for their beliefs. The deaths and injuries against Shia in Iraq result from bombings, shooting, and a combination of the two. There were at least 302 deaths and 258 injuries in Iraq this month as a direct product of the Shia Genocide. The number of deaths in Iraq is a decrease from 376 of the previous month, but the injuries increased from 165 to 258. The violence variables have fluctuated over the course of the year, and will mostly likely continue to do so. Many of these bombings take place in the various areas of Baghdad by terrorists hoping to remove the security forces’ focus from the outer regions of Iraq.

Last month there were 67 Shia abducted, and this month there were only 9 abductions. However, the bodies of some of the previous hostages have been turning up around Afghanistan. The abductors are confirmed to be Taliban (or allied to the Taliban) in some circumstances, and suspected to be Taliban in the other instances. Five of the Shia killed this month were beheaded by the Islamic State that is attempting to take root in Afghanistan. According to the New York Times, the Taliban is determined to not be outshined in brutality by the Islamic State, and has begun beheading the Shia Hazaras they kidnap. Three of the 30 Hazaras that were kidnapped in February were found dead, and one of them was beheaded in a video. There was also one instance of Taliban militants forcing Hazaras off a bus, and stabbing all seven of them to death. This illustrates the dedication these people have to the extermination of Shia, because stabbing is a very intimate, purposeful type of murder. The Afghanistan Security Forces need to make a more concerted effort to protect the Shia minority from the likes of Takfiri terrorists who seek to wipe them out. 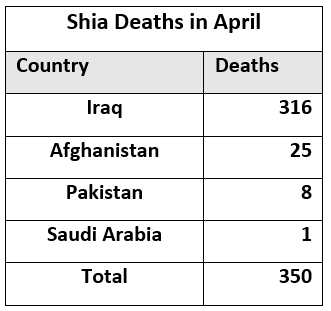 There were only two incidents of anti-Shiism in Pakistan this month that we are aware of, and they both occurred at the end of the month. The first one was a roadside bomb in Balochistan which killed four people and injured 18 more. The other incident happened in Peshawar where a Shia shopkeeper was shot at least three times that led to his death. Pakistan was in a cooling off period the past month or two, but these two events so close together could hint at a resurgence in anti-Shiism in Pakistan.

Saudi Arabia continued its oppression of Shia in their Eastern Province by conducting home raids which resulted in the arrest of 30 people. Saudi Prince Saud bin Nayyef bin Abdul Aziz is the governor of the Eastern Province, and made openly anti-Shia statements. He remarked that, “There are good men [in the Eastern Province], and there is also evil filth.” He went on to affiliate the evil filth with an old Shia dynasty, and accused them of trying to divide Saudi Arabia. Saudi Arabia is known for its extremely conservative form of Sunni Islam known as Wahhabism which does not see Shia as true Muslims, and this is the first anti-Shia statement made by a Saudi prince.

Nigeria is well known for the infamous work of Takfiri terrorist group Boko Haram targeting anyone who is against their radical interpretation of Islam. On April 20th there was a failed suicide bombing of an open air Shia mosque in Potiskum, Nigeria. Three Shia were injured by shrapnel from the explosion while the terrorist lost the lower half of his body. Boko Haram has attacked Shia in the past, but this is the first news media report of an anti-Shia attack in Nigeria in 2015. 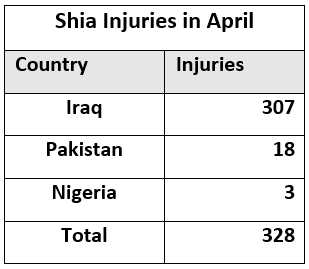 The conditions in Bahrain continue from the abuse of prisoners in Jaw Prison to the use of tear gas, rubber bullets, and concussive grenades on peaceful protesters. Prisoners in Jaw face beatings, torture, a lack of medical care and basic hygiene which is evident from the recent outbreak of scabies and the conditions of prisoners when they are allowed to see their families. There have been 91 arrests of activists in Bahrain since the beginning of April, and Nabeel Rajab is among those detained. His sentence has been extended by two weeks twice. There were just under 200 arrests for this year which means the arrests in Bahrain in April account for nearly half of the arrests for 2015. On April 28, the Bahraini government arrested 28 people on terrorism charges, but did not release any names or targets of the attacks. The suspicious nature of the arrests combined with the Bahraini government’s history of oppressing Shia leads us to believe that some, if not all, of those arrested were Shia. Shia Rights Watch will monitor the situation for more details.

The Islamic State of Iraq and Syria kidnapped around 50 people on March 31st, and ten of those hostages were Ismaili Shia. The news of the abductions was not released, because the families were negotiating with the terrorists. However, the

dialogue has broken down recently. The other hostages were taken for their perceived loyalty to the Ismailis even though they are Sunni. Six of the Ismailis are women, and there were 15 other women taken. Head of the Syrian Observatory for Human Rights believes that the women are sure to become slaves as this is one of the ways that the Islamic State funds itself and gains followers.

On April 20th, Shia Rights Watch was notified by one of our sources that the head of a Shia Mosque was arrested for an unknown reason. This a troubling development, because this would be the first time in 2015 that anti-Shiism has appeared in Madagascar. Shia Rights Watch will be following up on this case to monitor for religious persecution and human rights violations.

The amount of Shia killed or wounded by bombs this month is down significantly from last month, and mirrors the yearly trend of decreased deaths and injuries. Bombs were also the only method that caused injuries to Shia this month. The deaths from shootings remain about the same while the amount of Shia killed by beheadings has double since last month. The utilization of a combination of methods to kill Shia has decreased significantly from 161 to 35. New to the report is the addition of stabbings which is a worrying trend if it continues to be a method selected by religiously motivated murderers.

Anti-Shiism seems to be taking more of a hold in police forces and governments, because the amount of Shia arrested this month increased substantially from 28 to 126. Some governments may be realizing how to commit sectarian discrimination more inconspicuously, and this is something to watch out for. Thankfully, the amount of Shia being abducted has decreased from 67 to 19, but the fate of those kidnapped last month appears to be grim as more bodies are turning up. Iraq still remains the deadliest place to be a Shia Muslim, and anti-Shiism has been reported in two more countries. Hopefully the mainstream media picks up on the violence that occurs against Shia in Nigeria. Bahrain continues to have the most arrests among the countries with anti-Shiism, but Saudi Arabia may be increasing their unabashed anti-Shia efforts. Share this report to increase awareness about the Shia genocide being committed around the world so that we may put an end to the suffering.