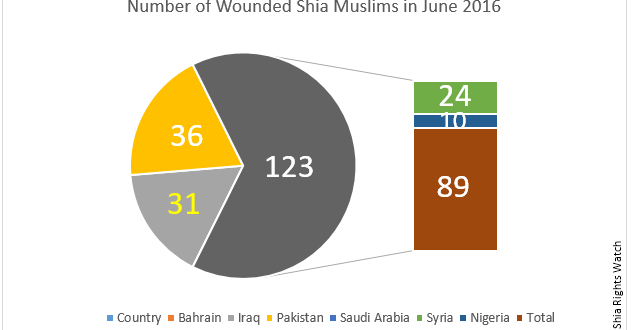 Incidents of Anti-Shiism in June, 2016

In the month of June, over 278 Shia lives were lost as a result of Shia targeted killings in countries such as Iraq, Saudi Arabia, Pakistan, Syria and Nigeria.  Revocation of citizenship and detainment on basis of pro-democracy efforts not only has been continued, but also increased in Gulf nations such as Saudi Arabia, Kuwait and Bahrain.

In the month of June, attacks in the nations of Bahrain, Iraq, Pakistan, Saudi Arabia, Syria and Nigeria have resulted in the death count of 277, wounded count of 102 and arrest count of 41.

Arrests in Bahrain top the charts. In comparison the month of May, the number of arrests have doubled. Further, the number of citizenship revocations have increased extensively.

The month of June coincided with the Muslim Holy month of Ramadhan. However, there was no sign of peace in Bahrain. In fact, tensions rose as Bahraini officials aimed to control affairs of Shia communities.

Despite his pardoning, Nabeel Rajab was detained. Sources state Rajabs deteriorating health as a result of unethical conditions under which he is held in.

On the 19th of June, the al- Khalifa regime announced a statement to religious authorities in the country that khoms, a Shia religious taxation, must be announced to the government. Shia leaders and scholars have strongly denounced said statement by the government and condemned the official’s involvement with the group’s religious affairs. Khoms consists of 20% of Shia individuals savings and is donated to leading Shia scholars to be used for public use (ie. reduce poverty, increase education availability, etc).

The congregation of Shia mosque Imams ceased Friday prayers at their mosques, citing a lack of safety and security for members of their service.

In order to quell pro-democracy efforts, Bahraini officials have increased their pressure on the Shia Muslim community by arrested and revoking citizenship of senior members of this community.  Which has failed in its efforts, and has increased tension among masses.

Over 84% of Shia casualties were results of targeted attacks occurring in Iraq- the majority in Baghdad, the capital of Iraq. As a result of regional turmoil, and Iraq’s lack of strong central government authority, there is little security.

The largest and most alarming attack occurred on June 7th, on which a car bomb detonated five kilometers away from the two holy shrines central to the city of Karbala, 80 kilometers southwest of Baghdad. Eight people were killed and 24 others were wounded. While not the largest in magnitude, this attack caused unparalleled fear as the two shrines are held central to the Shia faith.

As anti-Shia sentiment continues to thrive in Pakistan, four are killed and 36 others are left wounded. The largest of attacks occurred in Quetta by an explosive device left on a bicycle in the Almo Chowk marketplace. The explosion caused extensive damage to nearby stores and homes. This bomb was strategically placed in the marketplace as it targeted civilians who would be preparing for eid al-fitr festivities as the month of Ramadhan comes to an end.

It must be mentioned that one other bomb was found before its detonation in a separate event. In comparison to previous months, attacks targeting Shia population of Pakistan continues steadily with little signs of reduction.

Structural violence in Saudi Arabia becomes direct as a Shia individual lost his life as a result of raids in the Eastern province. The Eastern Province is home to the largest Shia density in Saudi Arabia.

Abdul-Rahim al-Faraj was shot by Saudi forces raided his home in late June. The al-Faraj family have been prominent pro-democracy activists- Abdul-Rahim was the fifth of his extended family to be killed by forces since the initiation of the Arab Spring in 2011.

In addition, Shiakh Jafar Sweileh, a prominent cleric in Qatif was arrested and detained for his pro-freedom of speech and religion writings.

Since April 2016, Shia death in Syria have increased by at least 25%. The environment of entropy in this nation as a result of revolution the war against ISIS has led to the death of millions of civilians. This environment of chaos has allowed for less accountability for crimes against religious minority, and thus has led to an increase in targeted killing of populations such that of the Shia minority.

Since the beginning of the Syrian crisis, the town of Zainabiya, located outside of Damascus has been the target of attack as it is the central- most Shia dense area of Syria. Further, this location is the destination of many religious pilgrims as they visit the shrine of Sayida Zainab, Prophet Muhammad’s granddaughter.

June’s largest casualty incidents was on the 11th, when two suicide bombers and one car bomber detonated their explosives in a busy street in Zainabiya. This incident lead to the death of 20 and the wounding of over 24 others. 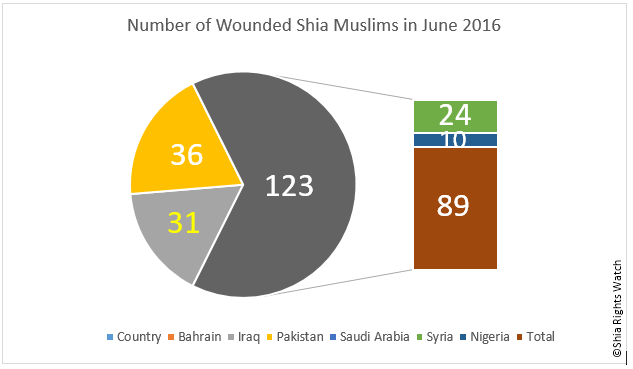 Nigeria is home to one of the largest and fastest growing Shia populations in the African region of the world. Along with expansion, however, has been an increase in targeting of this religious minority. Anti-Shia sentiment fueled by the Wahhabist ideology has spread throughout the nation and its officials.

In 2015, Shaikh Zakzaky was ruthlessly detained and hundreds of his followers were killed and disposed of in a shallow unmarked grave. Since then, the targeting of Shia pockets in Nigeria has continued and in some cases has escalated. While extremist groups do exist, many of the acts against Shia have been carried out by government forces.

Over six months into the year 2016, Shia targeting does not seem to slow down. All over the world, Shia Muslims are sought out, and targeted on the basis of their religious belief systems. Shia Rights Watch (SRW) condemns any and all attacks against Shia Muslims as well as any acts against humanity.