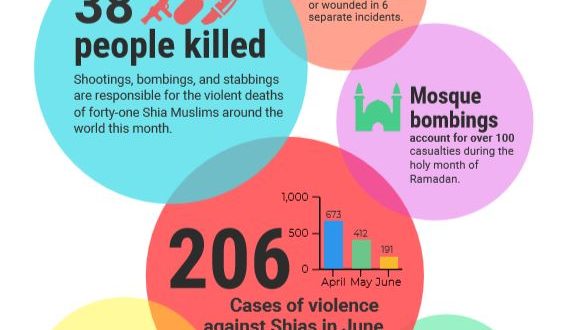 Incidents of Anti-Shiism in June 2018

Anti-Shiism is extended to June, and compared to May, the number of people killed and wounded has almost tripled. With 206 cases of anti-Shiism, Shia Muslims continue to be under attack in countries like Bahrain, Iraq, Nigeria, Pakistan, Saudi Arabia and Syria. Shia Muslims have faced inhuman outcomes of discrimination with sentencing, arrests, anti-Shia speech, stabbings, shootings, and bombings. Freedom of expression, freedom from arbitrary arrest and exile, and freedom of bel 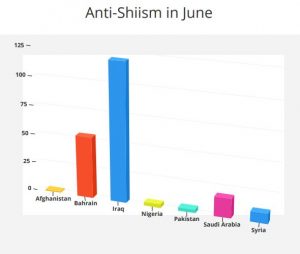 ief and religion are relentlessly deprived from Shia Muslims just because of their religious identity.

Highlighted cases in countries around the world spread awareness of the prevalence of anti-Shiism, and the attacks the religious community faces. Shia Rights Watch notes that there have been 2,186 reported cases of Anti-Shiism so far in 2018.

An unusual new wave of anti-Shiism was observed during June, concerning the rights of Shia Muslims. In a recent video published by Avichay Adraee, a major and the head of the Arab media division of the in the Israel Defense Forces (IDF) Spokesperson’s Unit, Adraee commented that Shia are a threat to the stability of the region, inviting “Arabs and Muslims” to take his advice and resist Iran. Adraee references sources in Islamic literature to warn about Shia, and then talks about the danger of Iran’s influence on the region. Although it is expected from an Israeli officer to have negative comments on Iran and reaction its political movements, it is not acceptable to degrade a faith or religion and associate them with a specific country. 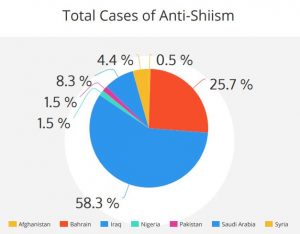 SRW believes such action and comments from the Arab media division of the IDF Spokesperson’s Unit is a definite false association.  Shia Muslims must not be associated with any particular country or political group. Shia Muslims have been proven to be positive and peaceful contributors to their communities and are loyal to their homelands no matter what country they belong to. Limiting Shia to one nation and identifying them as a threat based by Adraee is clear evidence that there must be more education and advocacy for Shia rights.

Peaceful protesters and opposition leaders are persistently incriminated in Bahrain. June marks 100 weeks since the ban on Friday prayers at major Shia mosques. This ban was the result of a silent sit-in protest, as deterrence for the congregation. King Hamad banned members from Shia opposition parties from running in an upcoming election, stripping them of their political rights. Bahrain continues to imprison Shia Muslims that disagree with the regime for reasons of “treason,” unjustly oppressing them. Additionally, Shia Muslims who have been convicted of a felony for expressing their religious identity or critiquing the oppression of the Bahraini government cannot run for parliament, which includes many activist or clerics that have been sentenced for dissenting or opposing the opinions of the government. Shia Muslims are continuously deprived of freedom of expression and are increasingly becoming prisoners of conscience. Bahrain adds to its already lengthy list of citizenship revocations by stripping five Shia Muslims of their citizenship. Shia Rights Watch notes that there has been increased ratification of new laws that target Shia Muslims. Details into increased systemic anti-Shiism in Bahrain can be found on ShiaRightsWatch.org.

After being in prison for a year over charges that violate Nabeel Rajab’s freedom of expression, Rajab got the chance to see his son Adam for the first time since his imprisonment. Although Rajab’s visit marked a step forward for just laws, his appeal was rejected by The Bahraini Court of Appeal. Rajab was unjustly sentenced to five years in prison in February for tweeting about his disappointments in the Saudi-led war in Yemen and condemning Manama’s treatment of prisoners.

The Manama regime arrested Rajab because he was “harming the interest” of the country, but in reality the Manama regime is violating several recognized universal human rights of Rajab such as Article Seven: the right to equality before the law; Article Eighteen:  freedom of belief and religion; Article Nineteen: freedom of opinion and information; concluding with Article Thirty:  freedom from state or personal interference in the above Rights.

With a similar case, Activist Najah Al-Sheikh was sentenced to three years in prison over a social media post, for trying to “overthrow” the Bahraini regime. While imprisoned, Al-Sheikh has reported many acts of torture including sexual assault and beatings.

While on house arrest for over 300 days, Sheikh Isa Qasim is denied healthcare. While Sheikh Isa Qasim was being transferred to the hospital, two of his sons were arbitrarily arrested. Not only did the Bahraini government risk Sheikh Qasim’s life by delaying medical aid despite his critical health, officials Qasim as an instrument to arrest other members of the Shia community.

There have been an additional 14 life sentences given to activists and clerics this month. Three other clerics were sentenced to death. Clerics and activist are targeted because of their religious practices and because they question the regime’s human rights violations.  Bahrain continues to violate human rights and impose cruel sentences on the Shia Muslim community. By handing down brutal punishments, Bahrain aims to silence activist. 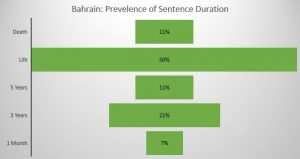 Zakih Issa al-Barboury, 28, and Fatima Dawood Hassan, 19, are activists arrested during raids on their homes in Nuwaidrat for alleged charges due to their anti-regime activism.

Fatima Dawood Hassan was released from prison, after being arbitrarily detained, while her aunt Zakiya Issa Al-Barboury remains behind bars.

Minor, Haidar Al-Mulla goes on hunger strike after spending two years of his 23-year sentence in prison. Al-Mulla has already been stripped of his citizenship, and the Bahraini government wants to press further charges against him, pushing him into signing a false confession with threats of increased time in solitary confinement. Mohamed Al-Mulla has also reportedly been placed in solitary as a result of his brother’s hunger strike and has also had his citizenship revoked. Activists say that they have endured torture while in detention and have been denied medical attention for injuries sustained during their imprisonment.

In June, there was a total of four arrests and 46 inhuman sentences given to Shia Muslims in Bahrain. Shia Muslims are systematically oppressed, and they have a higher chance of becoming prisoners of conscience in Bahrain with more than 100 cases of arrest being due to ideological views expressed.

Police opened fire on a group of people peacefully protesting the arrest of illegally detained Sheikh Ibrahim el-Zakzaky, a Shia community leader in Nigeria. The riot police employed tear gases and live bullets to fire into the crowd as they marched. At least three people have been injured, one critical, say, witnesses. 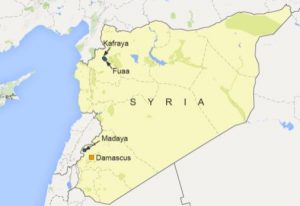 Two Shia-majority Syrian towns, al-Fouaa and Kefraya, have become the center of an escalation in fighting and unrest. The villages have been referred to by the UN as the last besieged population remaining in Syria, and the most recent air strikes in June have killed dozens including civilians, women, and children. On June 10th, at least 7 Shia were confirmed killed in the clashes, and two other civilians were injured, as a result of sniper fire. On June 27th, fighting broke out again, but there is no word on potential casualties.

In Syria, lack of security and stability in the region has limited media access to locations where fighting is heaviest. Since the most recent outbreaks of violence have been concentrated in Shia-majority areas, it is believed that the actual number of victims is much higher than is currently being reported.

On June 2nd, 12 civilians were killed by ISIS in a terrorist attack in the Salahuddin region of northern Iraq. All 12 victims, which included women and children, were from the same family. Although an investigation into this attack has been launched, no motive for targeting this specific family were evident early on.

Just a few days later, a deadly twin blast on June 6th targeting a neighborhood Mosque in Sadr City, a predominantly Shia district in Baghdad, has resulted in the deaths of at least 18 people with the list of wounded now up to 90.

In Iraq, like Syria, a severe lack of consistent, reliable reporting leads many to believe the number of casualties in the Shia communities is grossly underrepresented.

In a sweeping crackdown spanning the months of May and June, the Saudi government has arrested 17 people for engaging in what was dubbed “anti-establishment activities.” As of June 19th, 9 of the 17 remain in custody, but the authorities have stated that the release of the others may only be temporary. In response, the UN has acknowledged that the whereabouts of those still detained are unknown and warned that their condition could be very serious, leading to “draconian sentences” being handed down. The UN has urged the authorities to respect the rights of due process for the detainees. Many of the number of arrested include high-profile female activists who have fought for progressive reform for women’s rights.

These arrests, as well as reports of intimidating phone calls warning activists to remain silent, are being viewed as a reiteration that only the government has the power to enact change and that protests against the traditional modus operandi will not be tolerated. Although reforms like lifting the driving ban for women is part of Mohammad Bin Salman’s 2030 strategy to modernize Saudi Arabia, these reforms do not justify ongoing violations on human rights activism and minorities, on freedom of speech, freedom of expression, association, and assembly.

Three Shia Muslims were injured after being attacked on Eid Day while returning from Eid prayer at Imam Bargah Shah Najaf mosque in the Sukkur district of Sindh Province, Pakistan.

Elsewhere, Rashid Rizvi of Missing Shia Release Committee has rallied families and supporters of missing persons to a protest the arbitrary detention of members of their community in Pakistan. Community members say that the breadwinners of Shia families are being targeted and taken into custody illegally and without charges. Families have accused the state authorities of perpetuating their poverty and suffering by removing vital members of their families and communities with no due process. According to the BBC, the number of “disappeared” Shia persons in Pakistan in the last two years total nearly 150, an accusation the authorities vehemently deny despite clear CCTV footage of several abductions.

Jafar Tavakoli, a Shia cleric in Afghanistan, was assassinated in the night by unknown assailants. Members of the community have staged a sit-in at the governor general’s office to demand a proper investigation into the murder. No one has yet claimed responsibility for the murder. This incident follows the murders of other Shia clerics in years past, namely Sheikh Abdulvahed Saberi and Yuonos Alavi, neither of those cases have been solved.

Lack of stability in the government and the economy creates a breeding ground for the ongoing presence of extremist groups in Afghanistan. The result is that the Shia population has been perpetually targeted for no reason other than their faith. Over the years, both the Taliban and ISIS have launched targeted assaults on Shia dominant villages, particularly the Hazaras, simply because of differences in faith practices.

Overall, the first half of 2018 saw 2,805 incidents of anti-Shiism take place in over a dozen countries. Shia Muslims continue to be targeted in their homes, mosques, and communities for no other reason than their faith. They have been victims of bombings, shootings, stabbings, institutional oppression, illegal detention, and inhumane treatment, while the perpetrators of these atrocities remain unpunished. Although a reduction in arrests and sentencings display a lower overall number of incidents of anti-Shiism in June compared to previous months, the number of those wounded or killed because of their faith tripled since May. Shia Rights Watch urges governments and citizens around the world to stand up against religious discrimination at all levels to make our collective voices heard so that no individual, group, or governmental apparatus can get away with violence and oppression. We must actively fight for minority rights and continue to condemn human rights violations wherever they occur.