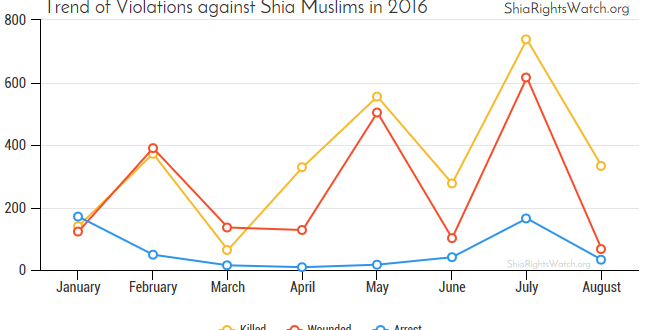 Incidents of Anti-Shiism in September, 2016

Death count in Iraqi Shia has totaled 372 in the month of September. Baghdad topped the charts with the majority number of Shia killed, with Madain following second. Targeting of Shia Muslims in Madain has been on a particular rise in the year 2016. The majority of deaths has been due to IED’s, suicide bombings and gunfire.

As the number of injured exceeds the casualty count, one can understand that the aim of Shia targeting is not only elimination of this population but also induction of fear. The majority of attacks, 99%, were targeted at not religious centers, but at everyday destinations, such as cafe’s or marketplaces and shopping centers.

Incidents of particular concern have been a chain of explosions in densely populated areas of Baghdad, particularly the neighborhoods of Hurriya, Husainiya, Diyala bridge, and Abu-Dashir . Attacks were claimed by ISIS. ISIS targeting of Shia-populated areas have been ongoing since their reign and little attention has been given to them. Anti-Shiism sentiment adopted by ISIS has held a long history in Wahhabi extremism.

This year, September began in unison with the Muslim Hajj season. In light of last years targeted abuse of Shia Muslims in the Hajj processions and in efforts to reduce anti-Shiism, Shia Rights Watch issued a travel advisory warning Shia Muslims of possible tensions and encouraging reports of human rights violation. Total transparency on the part of Saudi Arabian forces and Shia pilgrims was also encouraged.

However, Shia rights abuse continued to persist as a total of 17 Shia Muslims were detained unjustly. In addition, many Shia report having to undergo extra process in entering the Kingdom. Thirteen of the 17 arrested were Bahraini citizens, which raises concern as hajj processions are a religious rituals with the aim of creating unity among the global Muslim community and spreading peace. With their arrests, Saudi forces have disrupted the peace and have used hajj as a means of political control in the region.

Ala Taha, an Iraqi scholar was also arrested in this years Hajj procession. In mid-September, Taha was sentenced to three-month incarceration and a total of 300 flagellations. With the efforts of Shia Rights Watch legal and advocacy team, and the Iraqi Embassy, Taha was released before the end of hajj processions.

Three other Shia scholars Sayed Zainedin, Sayed Jafar Mosavi and Abo-Hamed Yousofi were also detained upon their entrance to the Medina airport.

Anti-Shiism in the Kingdom of Saudi Arabia is systemic as scholars and religious leaders in the nation have encouraged hatred. One example of this is the twitter post of Mufti A’eth al-Gharni, in which he denounced 80 million Shia earlier this month.

On the eighth of September, punjabi police forces raised a women’s seminary in Hussainabad, sahiwal, without warrant. Anti-Shiism sentiment has been on the rise in southeast Asia, specifically Pakistan. In the past, anti-Shia actions were carried out by extremist groups such as LeJ or SeS in forms of targeted bombings or shooting of Shia in prominent social classes. The recent rise in unwarranted raids of Shia Islamic seminaries is a sign of escalating anti-Shiism tension in Pakistan. Shia Rights Watch has and continues to warn the rise of such sectarian hatred as little justice has been displayed. Justice must be served and recognition of wrong doing must be announced by responsible parties in order to reduce sectarian conflicts in not only Pakistan, but also the region.

Conditions in Bahrain continue to be striving for Shia citizens. Abbas Abdul-Nabi, an activist has been placed in solitary confinement. Abdul-nabi has been critically ill as result of police brutality on peaceful protest. Abdul-Nabi has been denied medical attention.

If not detained, numerous activist have been denied leaving the nation, one such being Sharaf al-Mousawi. Ahmed Reda, a journalist, has also been restricted from traveling outside of Bahrain- no reasons have been announced for said restrictions.

Upon the return of Hajj, many Bahraini travelers have had their passports withheld.

A prominent Mufti in Mauritania has called for action against the growth of the Shia religion in this country. This outright denouncement of Shia community is a display of an expansion of anti-Shiism in this country, and more importantly in the region. Shia Rights Watch strongly condemns any isolation of minority communities in Mauritania and urges peaceful action against hatred.