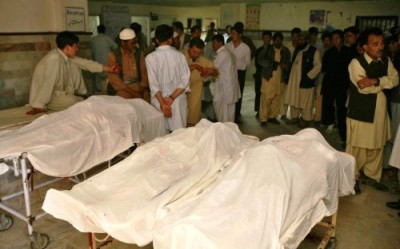 13 killed in attack on shia in pakistan 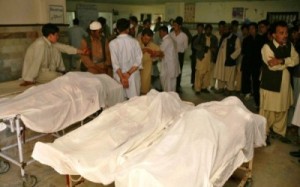 In yet another attack targeting Shia Muslims in Pakistan. Militants belonging to outlawed Lashkar-e-Jhangvi group today stormed a bus carrying members from the minority community, gunning down at least 13 of them and injuring seven more in the restive Balochistan province. Three gunmen travelling in a pick-up truck stopped the bus with about 30 passengers in Akhtarabad area on the outskirts of provincial capital Quetta, witnesses said.

Two gunmen then entered the bus and fired indiscriminately, they said. Thirteen men, most of them Shia Hazaras, were killed and seven others injured, police said. The injured were taken to the Bolan Medical Complex and those with critical wounds were shifted to Quetta’s military hospital.

Officials described the condition of three of the injured as serious. The attackers fled from the area before it was cordoned off by police and paramilitary Frontier Corps personnel. Witnesses said all the slain men were labourers who were going to a fruit and vegetable market for work. Ali Sher Haidry, a spokesman for Lashkar-e-Jhangvi, telephoned reporters in Quetta and claimed responsibility for the killings. Haidry had made similar claims for attacks on Shias in the past.

The claim came hours after the Chief Justice of Balochistan High Court banned the publication of threatening statements from militants. City police chief Ahsan Mehboob removed a police officer from his post for failing to provide security to the bus in the wake of several attacks on vehicles carrying Shia Hazaras in Quetta and nearby areas.