44 Shia Killed in Diwaniya and Karbala 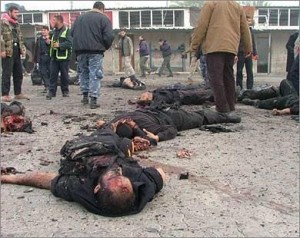 Attacks on Shia by Anti-Shia terrorism are continuing in Iraq. On Tuesday July 3,2012 a small truck exploded in a market in the city of Diwaniya killing 40 Shia, and another blasts killed 4 Shia near the city of Karbala.

According to the sources the bomb that killed in Diwaniya was exploded near a Shia mosque where pilgrims gathered to travel to Karbala to celebrate the birthday of Imam Mahdi, this week.

Police announced a partial curfew and blocked all entrances to Diwaniya, 150 km (90 miles) south of Baghdad and 130 km southeast of Kerbala. Police sources say 75 people had been wounded.

Earlier in the day, two bombs in a vegetable wholesale market killed four Shia and wounded 29 near the central Iraqi city of Kerbala, hospital.

“The bombing happened because of sticky bombs attached to two parked cars which went off separately,” .

Iraq’s al Qaeda which is supported by Anti-Shia Wahhabis has claimed responsibility for some of the recent bombings against Shi’ites.

This comes after the month June in which 245 Shia were killed and 754 were left wounded as results of car explosions.

Last month at least 237 people were killed and 603 wounded in attacks, mainly bombings, according to a Reuters tally, making June one of the bloodiest months in Iraq since U.S. troops withdrew at the end of last year.