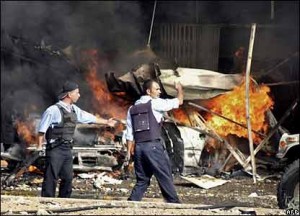 At least 32 people were killed in blasts in Baghdad where 10 explosions tore through mainly Shi’ite neighborhoods during rush hour and other attacks targeted police patrols, commuters and crowds gathered in shopping areas.

In Thursday’s violence, one car bomb in the capital killed at least nine people and wounded 27 in the upmarket Karrada neighborhood, hurling shrapnel into the next street and blowing out glass from nearby buildings.

Witnesses saw four wrecked cars full of shrapnel and bloodied seats near an ice-cream shop at the site of another blast.

In at least three Shia neighborhoods in Baghdad, nine policemen were killed, and in the capital’s northwestern Kadhimiya district, a car bomb killed six Shia when it struck a street lined with restaurants.

In the biggest attack outside the capital, a car bomb killed seven Shia and wounded 33 in the town of Balad, north of Baghdad.