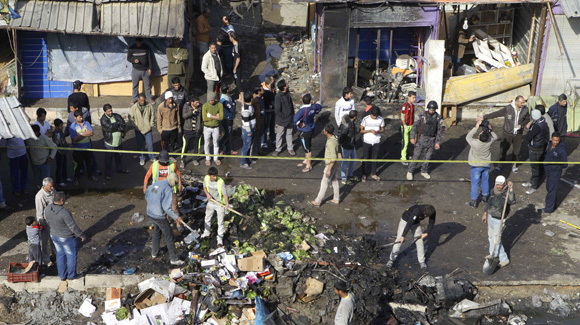 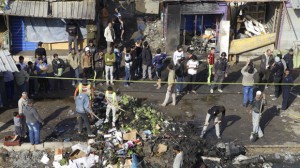 BAGHDAD— A suicide bomber detonated an explosive-packed car near a funeral procession in southeastern Baghdad on Friday, killing at least 32 Shia — half of them policemen who were guarding the march — in the latest brazen attack since the U.S. troop withdrawal from Iraq.

Police officials said the blast occurred at 11:00 a.m. in the predominantly Shia neighborhood of Zafaraniyah, where mourners had gathered for the funeral of a person killed the day before. They said 65 people were wounded in the attack, including 16 policemen.

Salam Hussein, a 42-year-old grocery store owner in Zafaraniyah said he was watching the funeral procession, which was heavily guarded by police, when the blast blew out his store windows and injured one of his workers.

“It was a huge explosion,” Hussein said. As he took his worker to the hospital, Hussein said he saw cars engulfed in flames, “human flesh scattered around and several mutilated bodies in a pool of blood” around where the attacker’s car had exploded.

Across Iraq, at least 200 Shia have been killed in a wave of attacks by suspected insurgents since the beginning of the year. Most of the dead have been Shiite pilgrims and members of the Iraqi security forces.