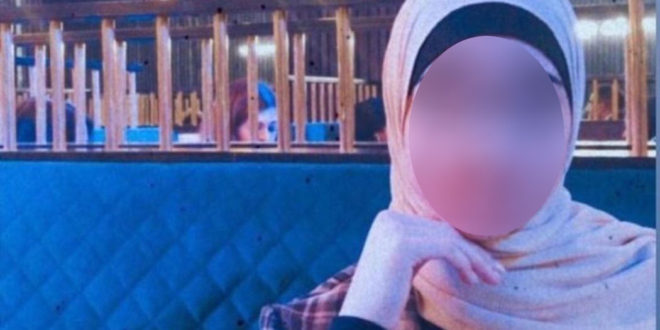 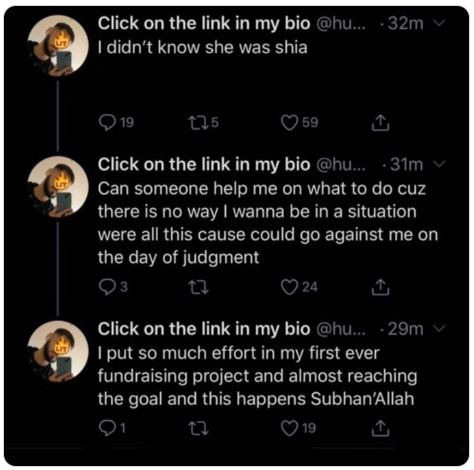 On May 17, Aya Hachem, a 19-year old student, was shot in the chest and killed on a trip to the grocery store. The Hachem family were refugees from Lebanon living in the United Kingdom.

Shia Rights Watch expresses its sincerest condolences for the family of Aya Hachem and voices concern over withdrawal of support for the family upon the realization that they are members of the Shia faith.

The case of Aya and the responses incited by her Shia faith sheds light on sentiments of anti-Shiism and the ever-existing discrimination against Shia Muslims.

Outraged by the targeting of the Hijabi female in the Holy month of Ramadan, the international community rose in commemoration.  Within hours, sympathetic messages flooded social media, and numerous fundraisers were set up in her memory.

Despite the initial unity of supporters, it wasn’t long until the identification of the Hachem family as Shia Muslims led to the withdrawal of donations. 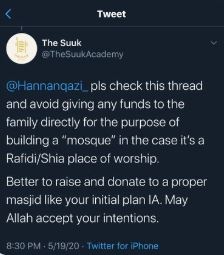 A thread of tweets among Muslim Twitter users shed light on the discriminatory sentiments that cloud fundraising.

On May 19, Twitter user @humbleackh1 tweeted, “I didn’t know she was a Shia… no way do I want to be in a situation where all this cause could go against me on the Day of Judgement.”

Twitter user @Hannanqazi_ raised 30000 Euros to build a mosque in Niger for Aya. Qazi stated, “The fact that the family aren’t in the best of financial situations and have only granted me to utilize £5000 to build the masjid in Niger for sister Aya. As the rest of the money will go towards the funeral costs and whatever additional costs the father may need to cover….”

The tweet was responded with cautions against “building a mosque in the case it’s a Rafidi/ Shia place of worship” and calls to “donate to a proper masjid.”

While many have denounced anti-Shia sentiments and expressed support for the Hachem family, the events that unfolded after the family was identified as Shia Muslims points to a prosperous culture of discrimination, a culture not foreign to members of the Shia faith. 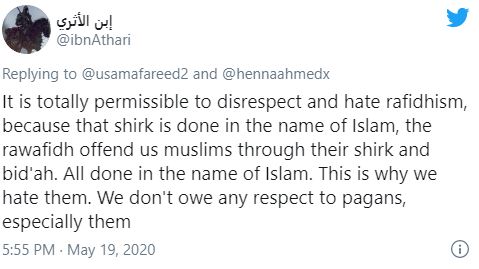 On a global scale, Shia Muslims are targeted in bombings and shootings organized to limit Shia existence. Shia Muslims endure cultural and systemic violence that downgrades them as second-class citizens and leaves them in search of justice.

The lack of aid and support within humanitarian efforts for Shia Muslims is also not new. Many Shia Muslims report facing discrimination in obtaining funding, not just across the Middle East, but also from providers based in the West.

The story of Aya Hachem is yet another reminder that Anti-Shiism cannot be ignored. No longer can the international community turn a blind eye to violence against Shia Muslims.

“Microaggressions, erasure, deadly attacks, dismissiveness, and glaringly anti–Shia utterances are a burden we have carried on our backs for as long as we can remember. And the reality is that with every death, with every attack, and with every act of hatred against the Hazara Shias, against the Zakaria Al-Jabers, and the Aya Hachems of the world, we as Shia Muslims are reminded of one thing: beneath a layer of an ostensibly collective endurance of Islamophobia, our Shia identity leads us to a duality of internal empowerment and outward isolation –  we live in a world where it often feels like we have no one but ourselves to lean on.” Wrote Danya Jafri, the Ahlul Bayt chair of Columbia University, in an article on May 20.

On this occasion, Shia Rights Watch pledges its support for Aya Hachem, and all Shia lives lost amidst a world of indifference.

No longer can we afford to remain silent against anti-Shiism. 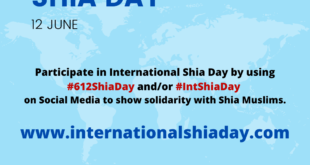 For Shia Rights, We Stand International Shia day intends to increase awareness about the struggles, …