In the month of May, 59 incidents of Anti-Shiism occurred, resulting in a total death count of 79 people, the injury of 264, and the arrest of 3 others. Reported incidents were from the countries of Afghanistan, Bahrain, Iraq, Saudi Arabia, and Pakistan.

Shia Rights Watch notes that this report provides only a glimpse into the dynamics of Anti-Shiism in the world. Many incidents are not reported due to limitations in international networks and refusal to report by victims due to fear of reprisal. 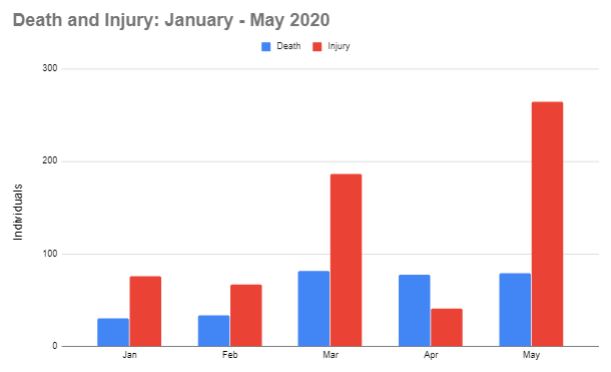 Five different incidents of Anti-Shiism lead to the death of over 50 individuals and the injury of 197 others.

Anti-Shiism attacks in May began as early as May 2 as a car bomb in Laghman left four wounded and three others dead. Two days later, an IED left outside a Shia mosque left 20 injured.

The most profound incident of violence was the bombing of the Dashte-Barchi maternity hospital in a Shia populated area of Kabul. On May 12, militant shooters dressed as police officers entered the hospital, shooting indiscriminately. Among those killed were multiple newborns and pregnant mothers, many of whom had traveled hundreds of miles for fertility treatments at Dashte Barchi. More than 80 women, children, and staff were evacuated.

After a post-incident visit to the hospital, the Médecins Sans Frontières’ head of programs in Afghanistan,  Frederic Bonnot noted,

“I went back the day after the attack, and what I saw in the maternity ward demonstrates it was a systematic shooting of the mothers. They went through the rooms in the maternity ward, shooting women in their beds. It was methodical. Walls sprayed with bullets, blood on the floors in the rooms, vehicles burnt out, and windows shot through. It’s shocking. We know this area has suffered attacks in the past, but no one could believe they would attack a maternity ward. They came to kill the mothers.”

Attacks in the Shia sectors of Kabul are not new. In 2019, a significant percentage of those killed in terror attacks were Shia Muslims, deliberately targeted for their faith.

The attack on Dashte Barchi was a clear display of the extent of violence extremists in Afghanistan are willing to use to threaten the Shia existence.

On the same day, a suicide bombing took place in the Khewa District of the Nangarhar Province. The attack targeted funeral processions leaving 32 dead.

Following the May 12 attacks. Afghan President Ashraf Ghani stated, “In order to provide security for public places and to thwart attacks and threats from the Taliban and other terrorist groups, I’m ordering Afghan security forces to switch from an active defense mode to an offensive one and to resume their operations against the enemies.”

Despite President Ghani’s statement, no new efforts have been taken to protect Shia Muslims in Afghanistan.

Anti-Shiism in Bahrain presented as violations of the rights of detainees and baseless arrests.

On May 3, the family of Sheikh Abdullah Isa al-Mahroos, also known as Mirza al-Mahroos, reported authorities prevented al-Mahroos from emergency IBS surgery, despite doctors’ orders. Al-Mahroos, a prominent religious leader and the vice president of al-Zahraa Society of Orphans,  was initially arrested in April 2011 and sentenced to 15 years. While detained, Al-Mahroos has reported severe pain in his legs, stomach, and back, as a result of torture and denied medical care.

In addition to hardships as a result of his absence, his family notes pressure authorities in attempts to force confessions from Al-Mahroos. His daughter, born days after his detainment has been denied a passport.

The case of Mirza al-Mahroos is just one of the violations of the rights of detainees in Jaws Prison. In May, numerous detainees were denied communication with their family members. In late May, when some detainees were allowed to communicate with their loved ones, they reported increased restrictions during Ramadan and punishment for individuals who practiced Shia Muslim rituals. Brothers Ali and Muhammad Fakhrawi were two detainees subjected to psychological and physical violence in response to their practice of Shia rituals.

Shia Rights Watch records a total of 39  incidents of Anti-Shiism, which resulted in the injury of 67 and the death of approximately 30 people across Iraq.  Attacks predominantly occurred in the city of Diyala, followed by Baghdad, Samarra, Khadhimiya, and Yusufiya. The primary aggressors were ISIS assailants aiming to maintain a foothold in the country.

The incidents, as mentioned earlier of Anti-Shiism, do not include foiled plots in Samarra and Baghdad.

An examination of the incidents in May highlights the real goal of ISIS in the country: to instill fear. Anti-Shiism in May resulted disproportionately in injuries, while opportunities to cause death existed.

Military officials in the country report an evolution in ISIS activity in the country, fueled mainly by the diversion of COVID-19. As COVID-19 sweeps across the international community, the reorganization of resources raises concern in Iraq.

As officials divert resources to maintain curfew and security for testing sites, ISIS assailants take advantage of reduced pressures and sophisticate their networks. Attacks across the country have become more sophisticated, presenting as, among others, improvised explosive devices, shootings, and ambushes. Since the emergence of the Virus, the prevalence of suicide bombings and coordinated assaults across locations, especially those at night, has increased substantially. Kirkuk has seen an almost 200% increase in violence and attacks have become daily in Diyala. 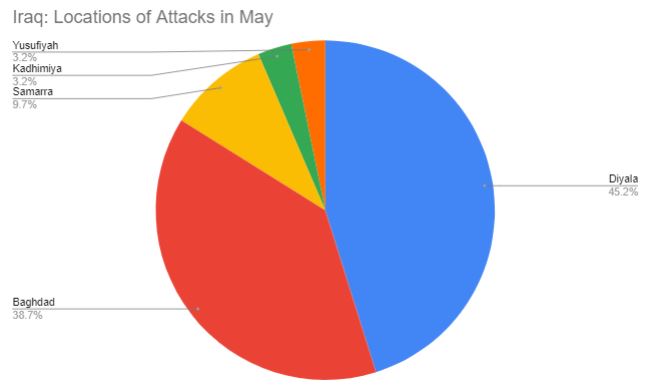 Shia Muslims exist in both Diyala and Kirkuk. Pockets of Shia presence witness a higher prevalence of attacks when compared to non-Shia neighborhoods.

Shia Rights Watch notes that endeavors aimed at controlling COVID-19 are essential but should not cloud the availability of resources dedicated to combating extremism in the country.

Shia Muslims in Saudi Arabia are seen as deviants. Their beliefs are discounted and advertised as those outside the religion of Islam.

Ramadan coincided with May. Within the Holy month of Ramadan, Shia Muslims commemorate the death of Ali and the “Nights of Qadr.” On May 14, military forces raided the neighborhood of Umm al-Jazm in Qatif. Officers prevented the call to prayer. Residents reported members of the Shia congregations feeling targeted for their beliefs, noting the incident as yet another limitation in religious expression by the Saudi authorities.

Shia Islam is not officially recognized in Saudi Arabia.

On May 27, terrorists attacked Farjad Hussain and Saleem Abbas in Gilgit Naltar Valley. The pair were boarding their car during a picnic on the occasion of Eid al-Fitr. They were identified as Shia Muslims as they listened to eulogies.  Abbas died on the way to the hospital while Hussain lost his life immediately following the attack.

With terror organizations like Lashkar-e-Jhangvi active in Pakistan, Shia Muslims face danger daily. Shia Rights Watch highlights a need for recognizing Shia Muslims as an identity at heightened risk of violence in the hands of extremists. Until active measures to reduce Anti-Shiism are put in place, the lives of individuals will continue to be endangered by terror organizations.